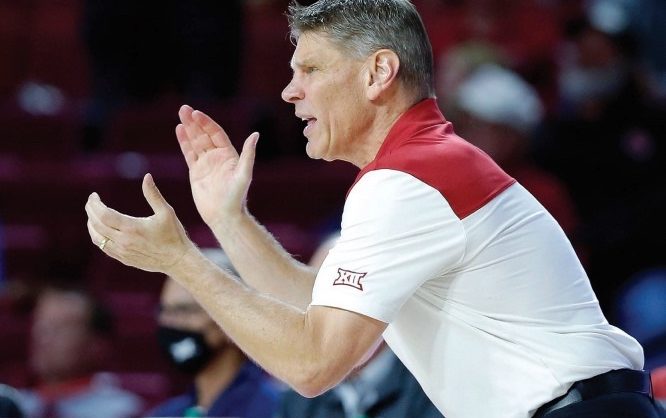 Porter Moser, the current head coach at the University of Oklahoma, made his name known at Loyola University Chicago, where he led the Ramblers to a Final Four appearance in 2018 and a Sweet 16 appearance in last season’s NCAA Tournament. He spent 10 seasons there.

Following former OU head coach Lon Kruger’s retirement, Moser got the call to migrate his talents a little farther south to Norman, OK, to make his mark there. Though he obtained an almost completely depleted roster, Moser has made the best of his situation, as he usually seems to do. OU’s roster consists of six transfers, four freshmen, and five returning players from Kruger’s 2020-21 roster.

The players that returned for OU are Elijah Harkless, who’s known as a defensive specialist. Blake Seacat, who only appeared in four games last season. Rick Issanza, who barely saw the floor as a freshman. Umoja Gibson, who received regular playing time. And Jalen Hill, a regular in their rotation last season.

Needless to say, Moser has been presented with a challenging task entering his tenure at the University of Oklahoma. That doesn’t seem to matter, though. Moser’s positive personality and electrifying coaching style seem to be permeating throughout the entire program, and they’ve done nothing but overachieve all season. There have been games where they’ve underperformed and lost games they shouldn’t have lost. There have also been games where they’ve stepped up to the plate and out-performed a team that was ranked higher than them.

For Porter Moser, it’s that time of the year once again: March Madness. With the Sooners poised
and hopeful for another NCAA Tournament appearance, Moser will bring his same underdog mentality to the table, whether the Sooners are considered an “underdog” or not.

Moser’s makeshift roster has made the best out of an unlikely situation all season, and they appear ready for the gauntlet of competition that’s to come. Transfer Tanner Groves, Gibson, Harkless, Hill, and Jordan Goldwire will lead the charge, but the contribution from guys like C.J. Nolan, Ethan Chargois, and Bijan Cortes will be what puts the Sooners into that second gear come playoff time.

For Moser, we know he’s a clutch coach. We know that he performs well under pressure. Usually, he does so while coaching a mid-major. This time, he’ll be coaching a major university that had plenty of regular-season practice in what could be the best conference in college basketball.