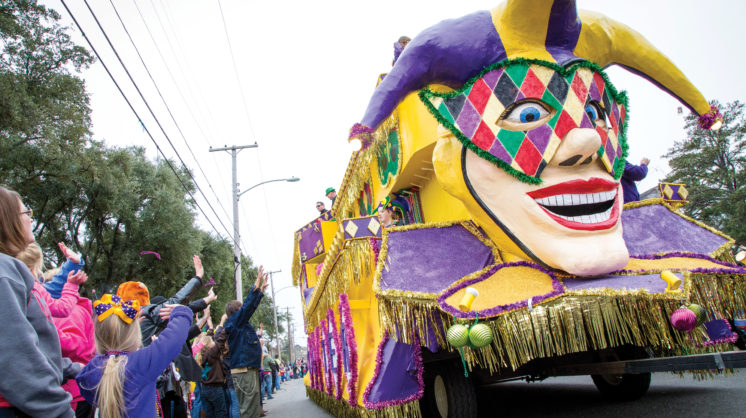 Twelfth Night is more than a Shakespeare play; in the Christian calendar, it is also known as Epiphany or Three Kings Day, marking the arrival of the magi to the manger. In a more worldly sense, it is the beginning of an approximately two-month party – Carnival – that culminates in Mardi Gras. (This year, that’s on March 5). Translated into English, Mardi Gras means “Fat Tuesday,” the final day of revelry before the solemn Lenten season. So if you haven’t started partying yet, you’d better hurry and catch up.

Carnival originated in Italy as Carnevale – from the Latin for “Farewell to meat,” its name refers to practices of abstinence during Lent. Other European areas followed suit, and the French brought the tradition of Mardi Gras with them into areas they claimed in the New World. Mobile, Alabama, claims the first observance in the Americas.

During the months leading up to the last week of Carnival, krewes – organizations that plan everything from parties and balls to parades – work on costumes and, often, floats. As with so many other customs imported into this country, different areas put different spins on Mardi Gras. Some are very traditional and class-conscious; some celebrations are riotous and R-rated; others determinedly family-friendly. Here are some of my favorites.

Shreveport’s the most easily accessible of the region’s traditional Mardi Gras celebrations. It’s definitely family-friendly, with lots of options and some unique local twists. While a couple of krewes hold parades in late January, you’ll get more bang for your traveling buck if you go the first weekend in March.

Stop by the Krewe of Gemini float-loading party on Friday – free and open to the public. Volunteers help hang the thousands of strands of beads to be tossed during the parade on Saturday. Catholic Monsignor Provenza blesses the floats, beer flows and a great time is had by all. 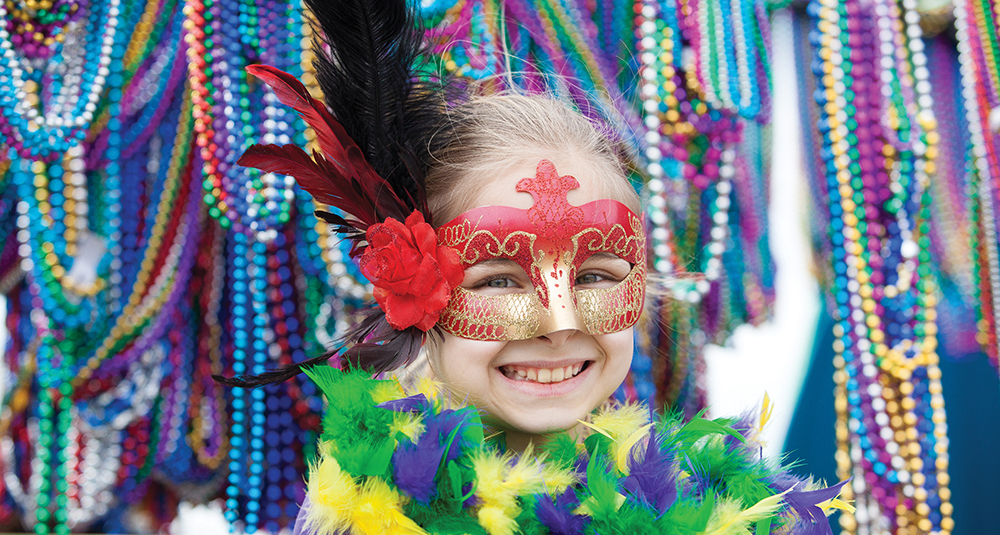 Sunday is the Krewe of Highland parade, a funky, fun event that winds through the historic Highland neighborhood. While other parades throw conventional items – beads, krewe cups and Moon Pies – watch this parade for something extra: foil-wrapped hot dogs. You can’t miss the giant wiener float.

Following this parade, there’s a party at Marilyn’s Place, a superb restaurant turned into a parking lot party. Live entertainment and great Cajun food are big draws for those in the know.

Festival season ends with the Children’s Parade on Fat Tuesday. The last piece of King Cake is eaten, and the beads are packed away as the town prepares for Lent.

For a complete schedule of events, visit shreveport-bossier.org/mardigras/. 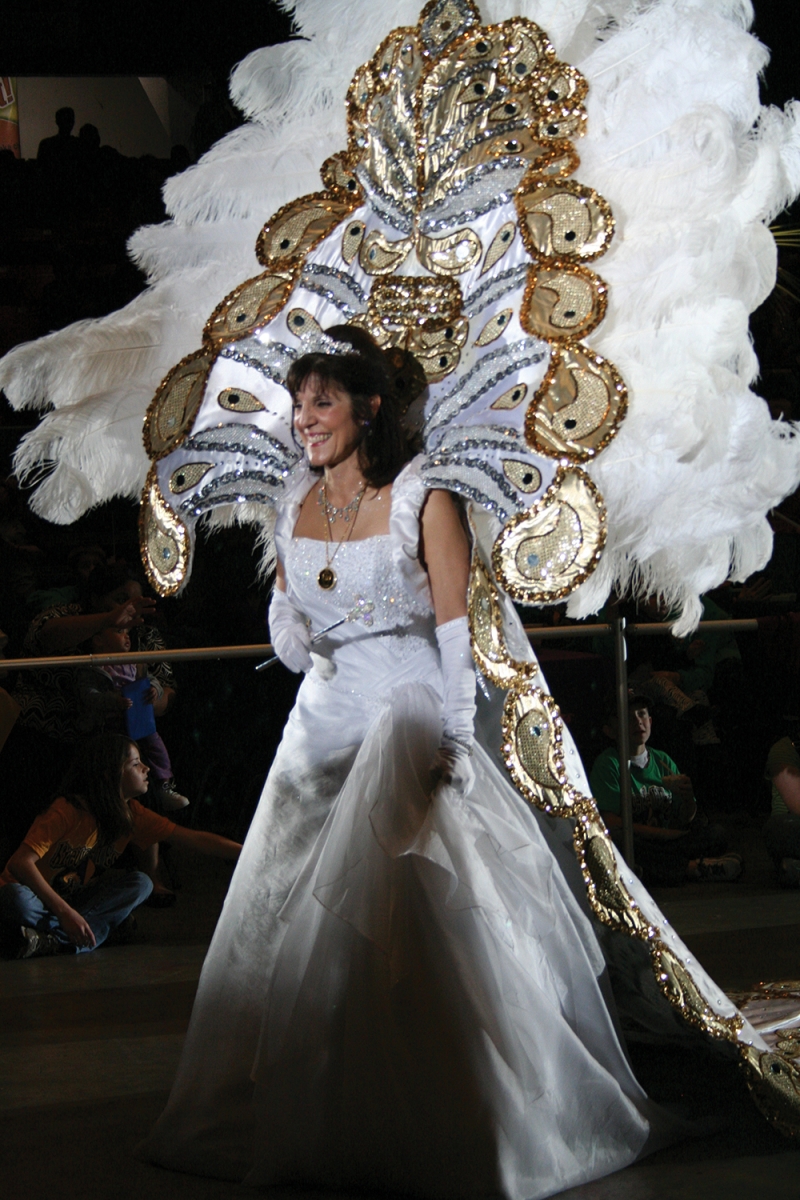 Lake Charles makes a great place to celebrate the Mardi Gras season; its 15 parades range from very traditional processions to a pet parade with the Krewe of Barkus, a Jeep parade and the flashing brass instruments of the Second Line Stroll.

The Mardi Gras Museum here is excellent. Visitors go from room to room of a former school enjoying exhibits on Mardi Gras history, costumes and how they are created – including lots of examples of the finished finery – king cakes and floats. You can even climb on a float, cheered by recorded crowd shouts of “Throw me something, Mister.”

To me, the best thing Lake Charles does is host a Royal Gala at the Civic Center. Royalty from all the krewes parade in their most elaborate garb. These duds are not their parade outfits – these are the robes, feathers, furs and crowns that put the regal in regalia at krewe balls. For a minimal admission, you get a good seat for the most beautiful show in town.

Check out visitlakecharles.org/swlamardigras/ for everything you need to know to enjoy Mardi Gras in this charming city. 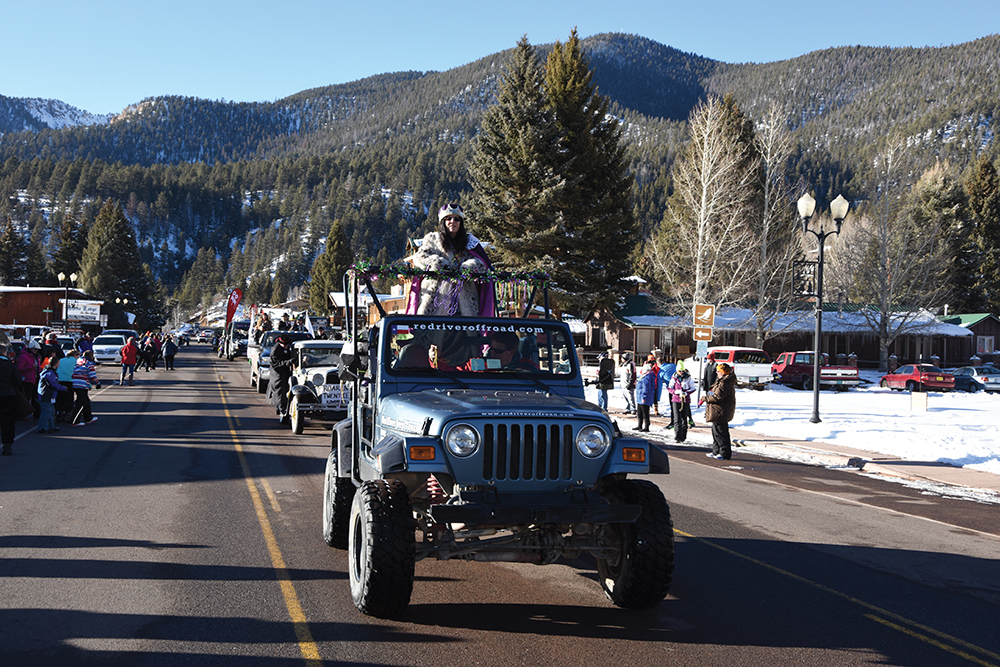 Red River’s Mardi Gras in the Mountains offers something none of the others have: snow (sometimes). Events kick off the evening of Feb. 28 with the Krewe Krawl, a walking parade carrying the Tchoupitoulas, an effigy of a fictional figure. Spectators write down worries and concerns to be burned away with the burning of the Tchoupitoulas.

Adult beverages are featured in Friday night’s Drink Making Contest. Saturday features the Mardi Gras on Main Street Parade, with the Grand Ball and Costume Contest in the evening. Everyone is invited for zydeco music and dancing.

In keeping with its reputation as a family-friendly destination, Red River hosts the Children’s Ball on Sunday night. Kids are encouraged to wear their costumes and beads. Information on the events is online at redriver.org/events/annual-events/mardi-gras-in-the-mountains/.

Join in one of these celebrations – or start your own. Enjoy some King Cake and let the good times roll.

It was 7 a.m. when I was offered my first beer of the day. Men in strange costumes were mounting horses, awaiting orders from the capitaine. The officer and his crew were getting ready to participate in an old Cajun tradition: the Courir de Mardi Gras, more popularly known as a Chicken Run.

Perhaps originating in hard times in the 1800s in rural Acadiana, it was a custom of young men who rode from farm to farm, begging ingredients for a communal pot of gumbo. Our press group rode ahead on a flatbed so we could be in place for the wayfarers’ arrival at the first stop. 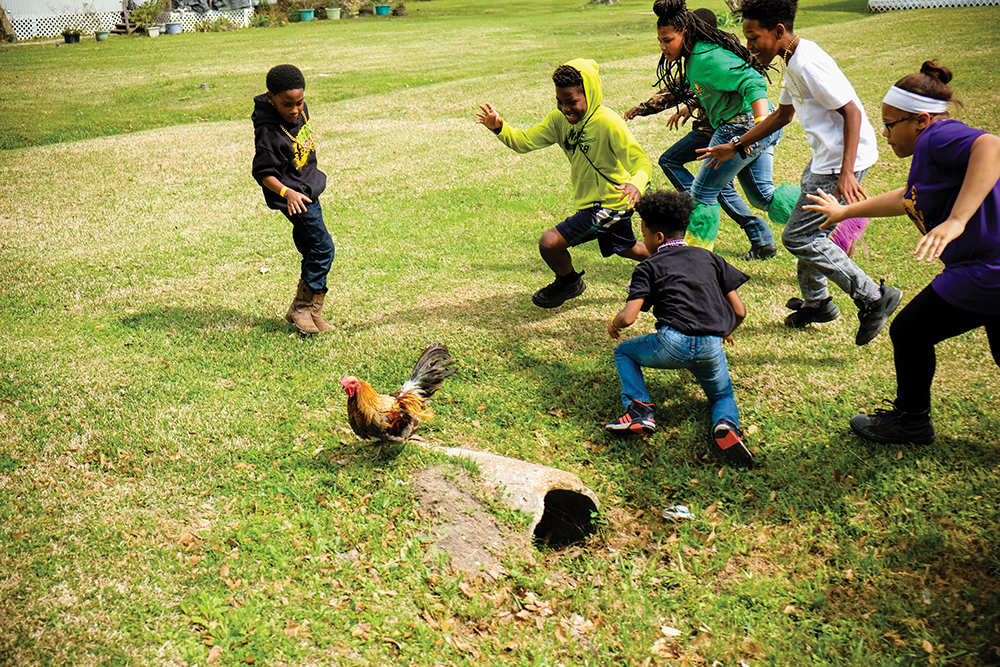 At this point, a caged chicken was brought out. On a signal from the Capitaine, the bird was thrown into the air, and the Mardi Gras crew competed to catch it – then it was on to the next farm. Unlike the results of the original runs, these chickens evaded the stewpot, released with only a few ruffled feathers. After completing the run, all gathered for the gumbo which had been simmering for hours … and more beer … and dancing.

A number of small communities in Cajun country hold courirs, but few are easily accessible to visitors. To get a taste of this tradition, visit Iowa (Eye-oh-way), 15 miles east of Lake Charles. Their run is actually a walking parade, with occasional stops for chicken chasing. It steps off at 10 a.m. on March 5 – Mardi Gras – and is followed by a community feed and dance at the Knights of Columbus Hall.

Lake Arthur is about 45 miles east of Lake Charles, and also has a large parade with 50+ floats. The actual chicken run, which is strictly for kids, takes place outside of town while the parade is being organized. The parade begins at 2 or 2:30 on Feb. 23, and travels a mile – from the north side of town to the lake. Fun times await. 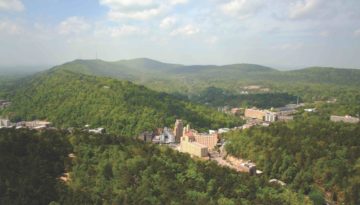 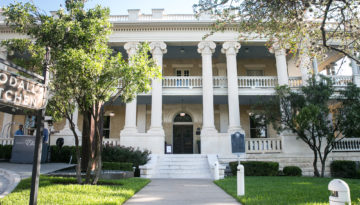 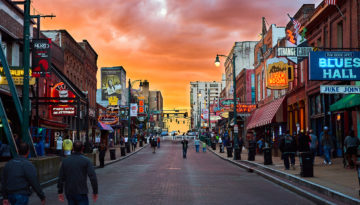