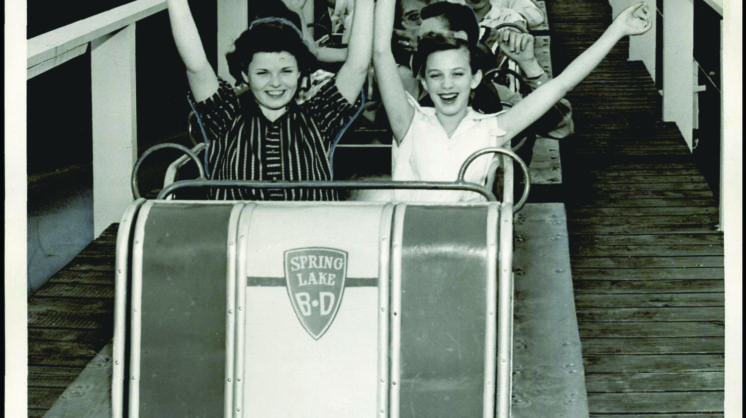 Now that they’re adults, they’re not ashamed to own the truth about their first roller-coaster rides.

“It scared me to death,” says Larry O’Dell, director of special projects for the Oklahoma Historical Society.

“It was pretty scary,” says retired businessman Jim Barnett, who was 11 the first time he climbed aboard the “Big Dipper” at the Springlake Amusement Park. The 80-foot wooden structure was a mainstay of the park, which for 57 years dominated the landscape that is now the Springlake campus of the Metro

Oklahoma History Center Director Dan Provo said he didn’t grow up in Oklahoma City and never rode the Big Dipper, but he knows about kids and roller coasters.

“It was a rite of passage to ride it with your hands sticking up in the air and not have to grab onto anything,” he says.

In May, Metro Tech donated to the History Center a car from the Big Dipper that had been on exhibit at the school’s Business Conference Center, located at Springlake Drive and Martin Luther King Boulevard.

“Metro Tech is celebrating our 40th year of delivering training to our community,” says Cindy Friedemann, chief officer for economic development. “As we looked at our past and looked toward our future, we realized the roller coaster represented the past and we are more focused on the future.”

Friedemann said Metro Tech wanted the car and the photos included with the donation to be seen by a larger audience.

“Ultimately we will place the car in our commerce exhibit and tell the stories of amusement parks and their economic and social impact,” Provo says.

Roy Staton, whose spring-fed pond had been open to swimmers, started expanding in 1924. He built a pool and ballroom and acquired rides from the defunct Belle Isle Park, O’Dell said. According to Provo, the park “represented a whole new type of social gathering for people, a newly developing form of entertainment and amusement.”

O’Dell said his parents enjoyed the music shows, which included such headliners as Johnny Cash, Roy Acuff and Conway Twitty.

“In the 1940s, that was the place to go,” Barnett adds. “They had a lot of rides. They had a fun house. And you could slide down a slide on a burlap bag.”

Bruce Fisher, retired administrative program officer for the Oklahoma Historical Society, said his family moved to a house on Springlake Drive in 1962. They were the second African-American family in the neighborhood.

Fisher was excited about moving near the park. Then he found out it was off-limits. The park only became integrated and open to African-Americans after the Civil Rights Act of 1964.
Once he was allowed admission, he says, “I was a popular kid, because my friends could spend the night and go to the park.” Fisher said some kids would stay all day, trying to master the games that awarded prizes.

“We want to tell a fair and balanced account of what the park meant and represented to different people,” Provo said. “It doesn’t represent a uniformly positive memory for people.”

By the 1970s and ’80s, “Springlake had declined in its appeal,” O’Dell says. “Frontier City had the better location. It was newer and had more resources.”

The park closed and the property was sold to Metro Tech in 1981.