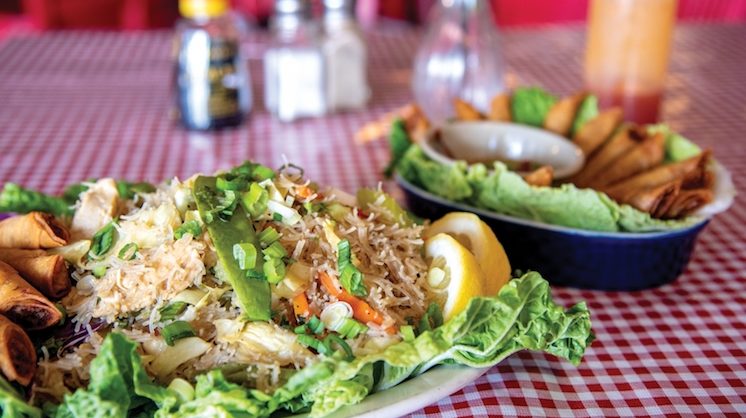 To a larger than necessary degree, traffic patterns determine where we eat most of the time. Destination restaurants for special events are the most common exception, but most people eat at restaurants within a couple miles of home and work or on a route in between. That cuts us off from delicious food in other parts of the 405. Rather than offer a full guide to these areas, we’d like to spend a few weeks highlighting some great choices in areas of the city you might not travel to often or that might be near you but just outside your normal driving routes. We begin with 10 Mid-Del Restaurants to Try Now.

Brielle’s Bistro. Still some of the best catfish in the metro, Brielle’s also features Southern, Soul and Cajun cooking, like po’boys, meatloaf, meat pies and chicken-fried chicken. They also have a full bar to help wash it down.

Chibugan. Stellar Filipino food is what you’ll get from this Del City eatery. The lumpia are excellent, as is the pancit, and the lunch specials are affordable and filling.

Creperie & European Cafe. You’re here for the crepes, and it doesn’t matter if it’s breakfast or lunch; they’re delicious. Made properly and loaded with a variety of fresh ingredients, they are the star of the menu, but so too are the sandwiches and made-from-scratch soups.

Hawaiian BBQ. It’s technically east OKC, but it’s definitely considered Mid-Del, and this is where you find the best bulgogi in the 405. You’ll have to wait ‘til the family gets back from vacation Sept. 5, but it’s worth the wait.

Korean House. Although it’s not in its original location, this Del City staple is the OG among Korean joints in the city. The specialities of the house are the barbecue items: bulgogi, bulgalbi, and samgyeopsal. Yes, you can cook your own if that’s your preference, but we like to leave it up to the experts.

Tacos Jalisco (truck). Finding mulitas around town got harder once Cardenas SLP closed, but this Midwest City truck scratches the itch deliciously. It’s a traditional taco truck with some surprise additions to a truck menu, like enchiladas and fajitas.

Tandoor. This one is also technically east OKC, but it’s close enough that we’re including it because it’s also one of the very best Indian restaurants in the 405. Locally known as the “truck stop Indian” joint, don’t let that dissuade you from checking it out. The butter chicken and tikka masala are incredible, and vegetarians will find plenty of options, too. Unless you’re a heat-head, ask for mild to medium spice.

Taqueria La Fondita #2. This is one of the pleasant surprises on the SE side. Finding a traditional taqueria this good that’s not on the SW side feels like a huge win. The tacos, as expected, are fantastic, as is everything else from the escabeche to the beans.

Taste of Soul. The giant egg roll concept started as a truck, and when it landed in a brick-and-mortar, Del City was the winner. It’s worth the drive for these as-advertised giant egg rolls, featuring traditional and creative options: chicken, cheeseburger, turkey-jalapeño, breakfast style, etc.

WePancakes. Midwest City folks love this breakfast joint, thanks in large part to more than a dozen styles of pancakes — if it’s in the name, you better be good at it, and they are. Choose from options such as traditional buttermilk, blueberry lemon ricotta, piña colada and something you have to try: donut pancakes. They have French toast and crepes, as well as a full lineup of traditional breakfast items.