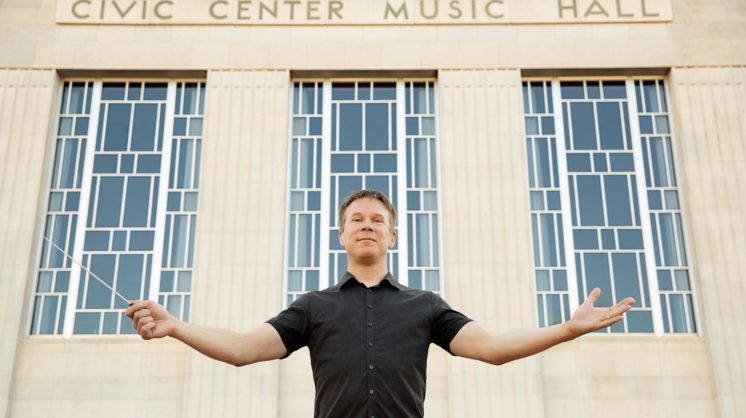 If Oklahoma City were a musical work, what would it be?

Near the end of an hour-long conversation, Alexander Mickelthwate pondered the question while looking out the floor-to-ceiling window of the OKC Philharmonic – the organization for which he recently began his second season as music director, and which has adopted for this year the double slogans “Orchestrating Passion” and “Phil the Movement.” The movement is toward embracing the future. Each of his Fall 2019 Classics concerts feature two or more pieces that have never been performed by the Philharmonic.

“Oklahoma City should be known as a breeding ground for fun, for creativity. That’s my thing,” Mickelthwate says. “In the first season, we were always surprised how the audiences are really open to the contemporary. We always get the random person who is like ‘why?’ – but overall, it’s crazy how embracing the audience is for adventurous, fun new things.”

Some of the fun new things on his wish list: a relationship with the Smithsonian’s National Museum of the American Indian in Washington, D.C. and more performances farther afield, similar to September’s concert on the SWOSU campus in Weatherford, like the upcoming February concert at Oklahoma Baptist University in Shawnee and possible performances in Ada and Tahlequah. Mickelthwate’s goal is “for us to go into the depth of Oklahoma’s soul, literally, telling a completely different story and elevating all of us.”

The Philharmonic’s spring lineup includes Frank Zappa’s “The Dog Breath Variations” paired with Philip Glass and Antonín Dvorak; the world premiere of “Of Thee I Sing,” a work commissioned from Baltimore-based composer Jonathan Leshnoff to mark the 25th anniversary of the Murrah Building bombing, paired with “The Limits of Almost,” by Winnipeg composer Matthew Patton; London-born Grammy-nominated composer Anna Clyne’s symphonic ballet “RIFT”; and an orchestral suite from the film There Will Be Blood paired with Stravinksy’s “The Rite of Spring.”

Mickelthwate continues, “It’s just the beginning, really. There are several ideas out there floating around, and so many stories to tell. One big thing is the social justice area. I’ve been meeting with the director of the Homeless Alliance and with the Department of Corrections programing, looking at different ways to do outreach.

“There's real openness now, and the entire city is moving in the same direction, from top down, with awareness. There is great possibility for collaboration: [Oklahoma] Contemporary. Factory Obscura. The new park. It all reflects the health and the creativity of the community.”

So if Oklahoma City were a piece of classical music, what would it be? He paused. “Well, it would be something light and open, almost like a Phil Glass. Because there’s so much opportunity and space and freshness to it. It’s contemporary, you know? There’s no heavy weight of history yet on it.” He paused again, and smiled. “First I thought of Shostakovich, but it doesn’t make sense. He does have all the slow development and spaciousness, but it’s too serious.”

In his goals for the Philharmonic, he envisions a future as full of promise as a raised baton: “We want to fill the hall, to be meaningful in Oklahoma, be fun and just create something where there’s a place in the city where we all are one. It sounds very simple, but it’s true. Doesn’t matter what race, color, ideology you have. We are humans, and we celebrate that through creativity. “We want to have that creative force become so strong that it shines outside Oklahoma and helps elevate the whole city and the whole state.” He pauses to consider the implications, and leans forward with renewed excitement: “If we were able to do that here? Against all odds? And then when people from the outside say: ‘All this is happening – where? In Oklahoma?’

“And I will say yes. In Oklahoma.”

Jan. 11: Minimalism in a New World

Feb. 1: From the Dramatic to the Sublime