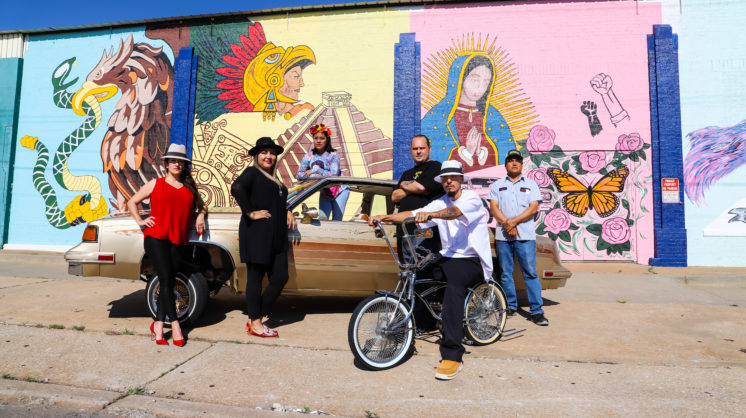 Argüelles is teaching art abroad in Istanbul, Turkey, this summer, but when he is in Oklahoma City, he works as an adjunct professor at Oklahoma City Community College, and is the co-founder and director of the Oklahoma Latino Cultural Center. Growing up in San Diego, he was influenced by the work of David Avalos and Victor Ochoa, two Chicano artists who created Chicano Park, a public art display in San Diego that was designated a National Landmark in 2017.

“The original idea was for me to work with high school and college students,” Argüelles said, “and I wanted them to see some of what I saw growing up. It was a chance to give them a sense of Mexican-American history at a time many don’t even use the word ‘Chicano.’” 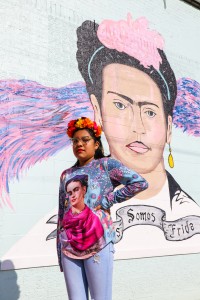 Argüelles calls himself a Chicano artist because it’s a designation that ties him to Mexico’s mythical and historical narratives. The design cues and aesthetics of the mural are a mixture of the myths surrounding Mexica, Aztlan and the Aztecs, as well as contemporary icons like Frida Kahlo and the lowrider-Cholo movement.

“Aztlan is this mythical homeland of the Mexica (pronounced may-CHEE-ka, from which Chicano is derived), a people who traveled south in search of a new home, following a vision,” Argüelles explained. “They would know they were home when they saw the eagle sitting on a cactus with a snake in its beak. The legend is that they founded the site now known as Mexico City.”

Those images are deeply tied into the aesthetic and mythology of Mexico, and the Aztec identity is a strong narrative element of their heritage, including the idea that Aztlan was located in what is now the American Southwest. In that sense, Chicanos are immigrating to their original homeland. Argüelles and his protégés tapped into that rich narrative when creating the first two panels.

The third panel is the celebration of the lowrider-Cholo movement of the 1960s and ‘70s, and iconic and revolutionary imagery including raised fists, the butterfly symbolizing immigrants and the Virgin of Guadalupe.

“Historically, the second Chicano mural was of cholos hanging out on a porch,” Argüelles said. “That mural no longer exists, but I wanted to include the car as a call back to that historic piece of artwork. There was something pure and beautiful about the Cholo movement – the use of cars, bicycles, clothing and music that had been morphed to meet our needs.”

Perhaps the most appropriated name and image in Mexican art is Frida Kahlo, and so she is the subject of the fourth panel, with a ribbon reading “Nosotros Somos Frida,” (We Are Frida). Argüelles said it was important to include her precisely because she’s become so commercialized, and he saw the trend of appropriating her developing years ago.

“Teaching students, you try to stay up on trends so that you can help nudge them toward a place where they can be noticed or influential,” Argüelles said. “I was afraid that someone would paint Frida here first, and so I wanted her to be part of this mural, for the students to be part of reappropriating her, thus the We Are Frida caption.”

The mural is easy to spot driving north or south on S. Western Ave., as well as driving westbound on SW 29th. Emma Dean Kratchowill said the mural was funded by the city’s Commercial District Revitalization Program, and a committee has already begun work on the second mural in the district.