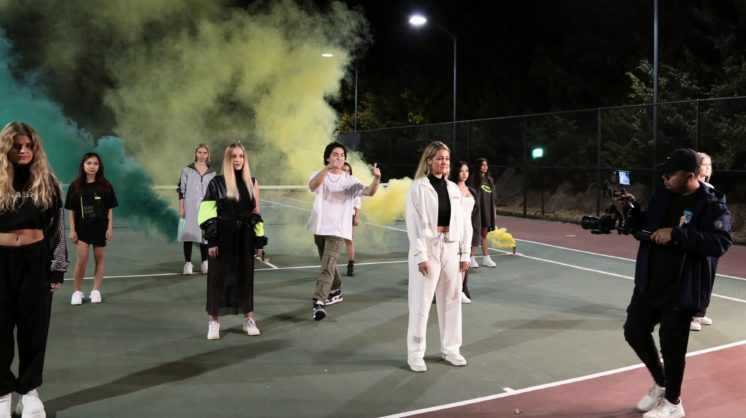 In the span of one year, what began as a college project has evolved into Edmond’s latest clothing line, Nash Engineered Fashion.

The athleisure fashion collection – a multipurpose line of hybrid apparel made to be worn during athletic events and any social occasion – was launched on Dec. 24 by owners Tamra Gould and Juan Aguilar, a married couple gaining attention in local fashion.

The idea began while Gould, 23, was in her final year at the Savannah College of Art and Design in Georgia, and her senior art project was to develop a clothing collection with a concept. Gould chose to create a line of athleisure inspired by her great-great-grandfather Lewis H. Nash, an early 20th century engineering pioneer.

Nash founded the Nash Engineering Company in 1905, beginning an engineering legacy for Gould’s family. Though she never developed an interest in the profession per se, she chose to utilize engineering aspects for more artistic ventures, creating what would become prototypes for the clothing brand’s future collection.

Before Gould was set to graduate last spring with a degree in fashion design, she was offered a job in New York City as a fashion designer with Nike. In May, she received news that, due to the pandemic, the offer was rescinded.

Gould moved back to her hometown of Edmond with husband Aguilar, a motion-graphic student at the same university, to live in her parents’ house after graduation.

“We decided to make our own brand off what I already started during my senior collection and continue it on,” Gould says. “That’s when Nash turned into a brand.”

The newly formed Nash team, composed only of Gould and Aguilar, converted an upstairs area of Gould’s parents’ home into a design, manufacturing and photography studio. Combining their life savings, they obtained industrial equipment and screen printers. Gould found machines similar to what were used in college, which had been operated under the supervision of professors and technicians. The order arrived on an 18-wheeler from Los Angeles, disassembled and without any instructions.

“From May until mid-December, we were teaching ourselves everything we could about these massive machines. A lot of YouTube videos, for sure,” Gould chuckles. “Anything we could learn about these machines and the screen-printing process – threading the machine, oiling the engine, designing full concepts – we taught ourselves.”

In those seven months, the two adapted the brand’s athleisure style to expand on Gould’s original concept, designing various prototypes and working as long as 14 hours a day.

Nash’s current clothing line features a blend of monochromatic or fluorescent-painted items and sets of clothing including unisex joggers, bucket hats and t-shirts, each designed with the distinctive Nash logo, either in bold print or a spray paint aesthetic.

While athleisure is the premise, smart garments – innovative clothing design using advanced textiles and interwoven circuitry – are the goal. The team is developing a “fashion with a purpose” style of clothing, including a shirt created for cyclists with lights on the back to signal turns or stops to other motorists, as well as a pandemic-inspired, temperature-gauging garment alerting the wearer of a fever.

They drew influence from a fashion trend seen particularly in the university gym – the place where they first met.

“When we worked at the gym together, we were surrounded by this activewear style, something we both enjoyed seeing and being in,” Aguilar says. “We wanted to create something that hasn’t been done much, which is a type of streetwear you can wear to be fashionable while being active.”

One of their top priorities is to use all fabric available, leaving nothing to waste.

“Throughout college, we were taught that the fashion industry is one of the most polluting industries on the planet,” Gould says. “We’re looking to be part of the solution, not part of the problem.”

Once they develop a prototype, Gould and Aguilar give samples to people whose advice and perspective they trust, including Hanna Northcutt, one of Gould’s longtime friends. Northcutt works as a marketing and advertising consultant at The Physicians Group in Oklahoma City, and has provided Gould and Aguilar with social media strategies and business advice.

“I’m hoping I’m their No. 1 client,” Northcutt laughs. “Seeing the prototypes go to where they are now, it’s unlike any clothing out there; not only because of their dedication to perfecting the product, but because of how inclusive they are to more than one body type. It’s the personal touches that you wouldn’t find in a factory-made piece that keep me coming back.”

Gould and Aguilar plan to add more people to the team as the business grows. Their dream is to be their own clothing manufacturer, designing all garments on location and expanding further into smart clothing. Until then, Gould and Aguilar continue to be transparent in their process.

“We want to reconnect our consumers to the products by being transparent, giving people a behind-the-seams look, literally,” Gould says.