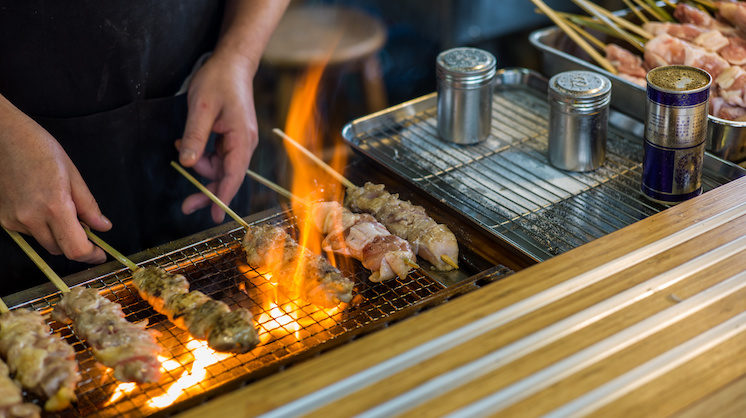 Chef Richard Ly, the former executive chef of Jimmy B’s Culinary and Krafted, is opening an izakaya in OKC’s northwest quadrant. Ly tendered his resignation at Jimmy B’s to open the Japanese pub concept in the old Yo Pablo space at NW 122nd and Rockwell, an area of the city that can certainly do with some more local options. The tentative date is set for mid-to-late March, depending upon construction, equipment, staffing, etc.

Called Awaji Izakaya, the restaurant is named after a Japanese island southwest of Osaka and will feature what Ly calls traditional Japanese street food, especially yakitori (skewers, usually of chicken), karaage, and kushiage (skewered, deep-fried beef and vegetables). Ly trained with an Okinawa chef early in his career, and he’s excited about the prospect of bringing what he calls “a getaway in Oklahoma City” to the northwest side.

“I’ll offer a limited sushi menu, too, but the focus is definitely yakitori,” Ly said. “And, of course, we’ll have omakase.” (The word essentially means “chef’s choice,” and is a standard way of leaving your meal up to the chef in Japanese restaurants, especially sushi bars.)

The theme is carried throughout the restaurant, including in the interior design, which is being redone into an izakaya theme, including a gazebo-style overhang in the bar and paper lanterns in all dining areas. Ly said he wants to create an environment that invites guests to “stay, drink and eat” in keeping with the izakaya idea.

The menu is small-plate based, and the bar will offer Japanese beer, sake, Japanese whisky, and a couple house wines. Ly said to expect traditional dishes like miso cod, soft-shell crab and hamachi kama (yellowtail collar). To keep it as traditional as possible, Ly has acquired a yakitori grill and will be using binchotan, a charcoal many chefs consider the best in the world and is traditional in yakitori grilling because it imparts no additional flavors to the dish.

Ly has already established himself as an excellent chef with multiple genres of Asian food, including hand-rolled dumplings, sushi and Korean steak with garlic noodles, all of which appear on the Jimmy B’s menu or happy hour menu.