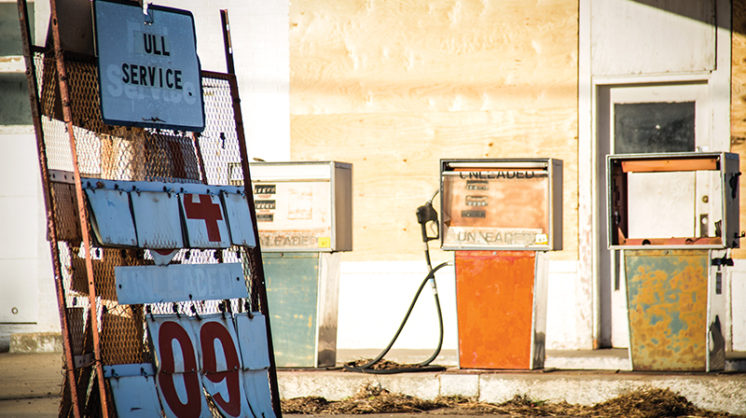 As Ron Summers drives along Lottie Avenue in northeast Oklahoma City, he recalls the thriving business community that once existed where there now are vacant lots, boarded-up homes and abandoned storefronts on both sides of the four-lane road.

“When I was a kid, maybe 8 or 9 years old, I remember on Lottie we had a grocery store, we had the drug store, a bakery, an ice cream shop and all kinds of businesses,” Summers, 62, says. “Along Lottie, from 13th to 24th, was a thriving community.”

Those memories come from a time before forced integration in local schools sparked a residential exodus, and a government-led effort to revitalize the neighborhood resulted in demolished buildings and broken trust between the city’s African-American community and City Hall. 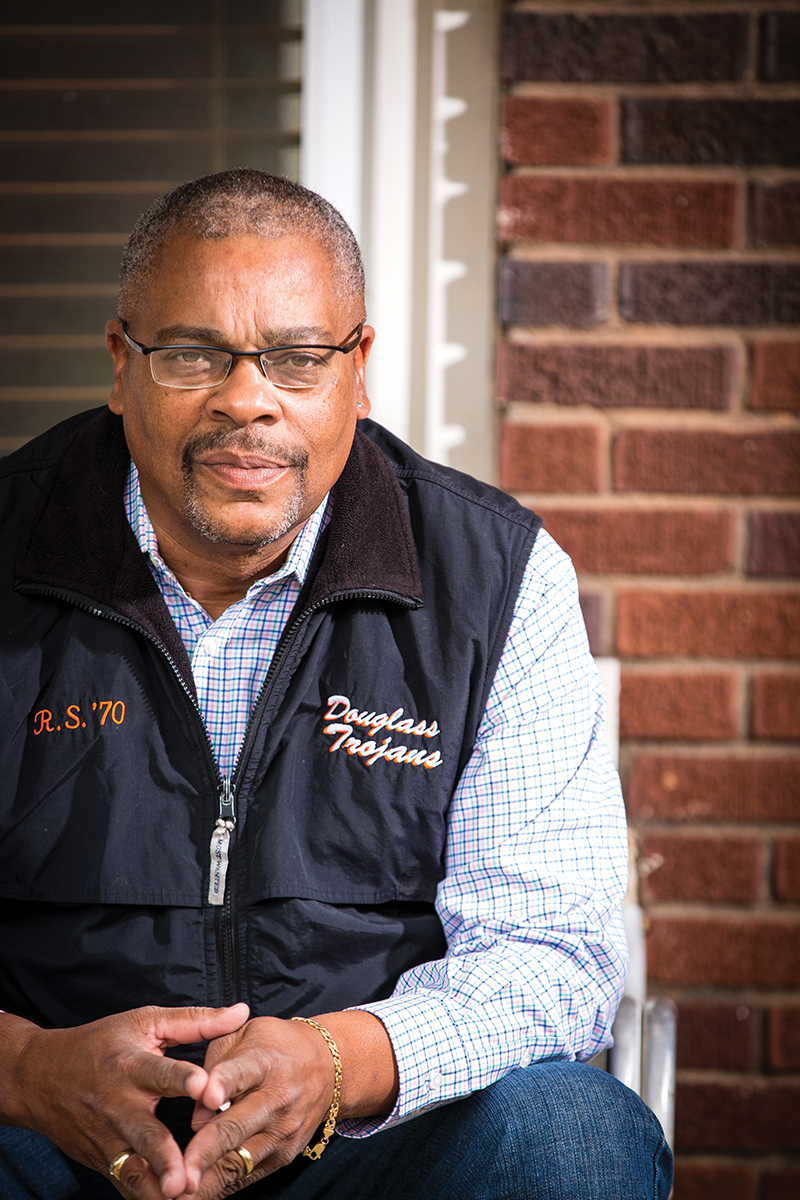 “I think it’s great, but you know, talk is cheap. I want to see them do something because it’s always been
the city saying, ‘We will do this’ and ‘we will do that.’ But nothing ever came.” – Ron Summers

Summers, who owns several homes in the northeast that he has revitalized and rents out, was not one of those who left.

“I’ve lived in the northeast my whole life,” Summers says. “I never moved northwest. My sisters have moved up north and they have told me to move up there, but I don’t see it. I’m a home-grown boy; plus things are actually changing for the better.”

Residents in the northeast part of the city, which is predominantly an African-American community – zip codes east of I-235 have African-American populations in the high 70 percent, compared to white populations being more than 70 percent on the west of I-235 – have reason to hope for better days, even if they justifiably remain somewhat skeptical.

“That anger and that fear, it was justified,” said Michael Eric Owens, a community development director for the Alliance for Economic Development – that’s the city’s arm in partnering with private developers in specific communities, especially those that utilize tax incentives such as Tax Increment Financing (TIF).

Part of Owens’ job over the past few years has been to work with residents and businesses in the northeast as the city looks to make another run at urban renewal, completing a promise that wasn’t kept just a few decades ago when Oklahoma City announced plans to demolish and rebuild large portions of the inner city. But after the demolition created a blank canvas in many northeast neighborhoods, the promised development never came. 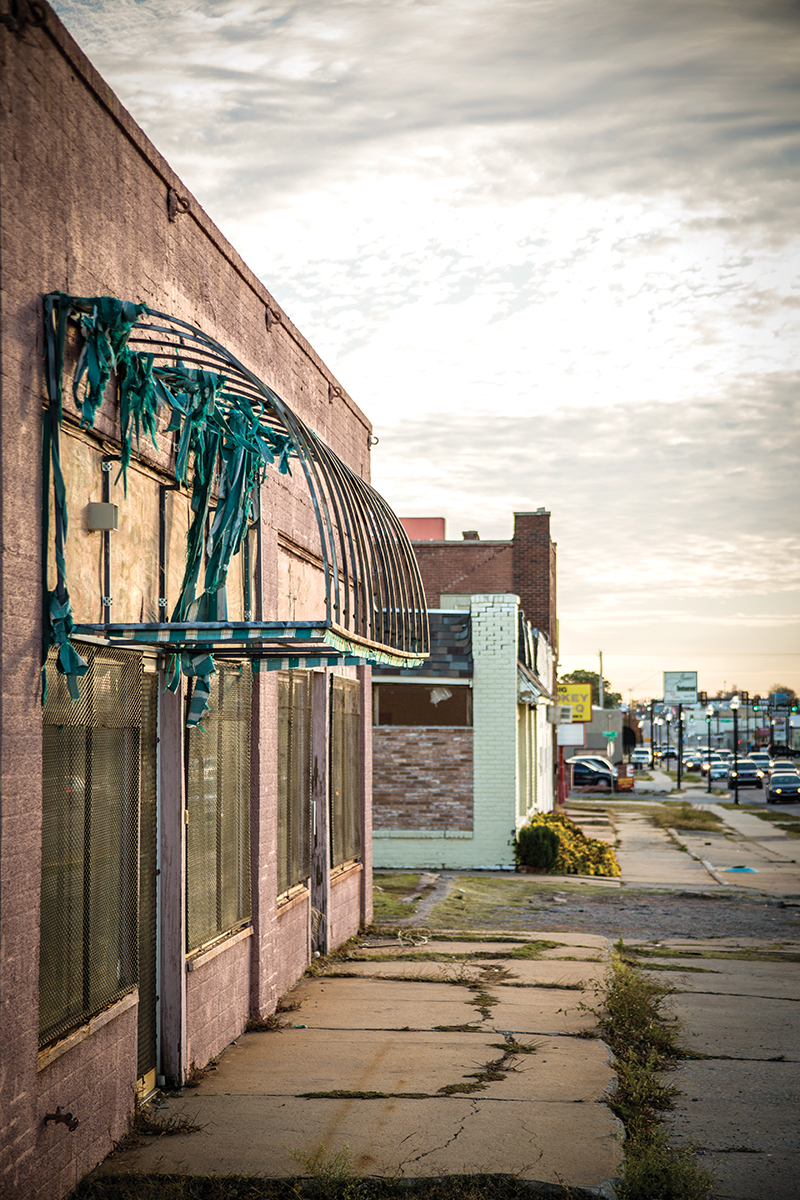 “I can honestly tell you, a year and half ago, we couldn’t even have this conversation because people were extremely skeptical, angry and fearful, and we had to deal with that fear, understand it, empathize with it and try to move them along to a point where we could work together,” Owens says. “In the past, development was done to them. But now we are trying to do development with them, with the community.”

The city has created a TIF district where it hopes to use growth in property tax revenue to spark development projects in the northeast. The same tool has been used in the revitalization of downtown, and now the city hopes to stimulate economic growth in a part of town that has been stagnant for decades.

While urban renewal of the ’70s and ’80s resulted in demolished structures and very few rebuilds, Owens said a more community-sensitive and long-term vision attempt is underway. The city owns hundreds of lots across the northeast and has created new design standards in an attempt to preserve local styles.

“When a developer comes with a plan we say, ‘Don’t start with the drawings or the plans,’” Owens says. “We say, ‘Let’s start by talking to the community first.’ That’s a shift in the way things used to be done.”

One of the more visible examples of blight in the community is the former Page-Woodson school, which served as a black high school during segregation before eventually shutting its doors in the early 1990s. Boarded up and blocked off by a chain-link fence for several years, the old school building had been an eyesore to many residents and the site of trespassers, vandalism and fires. 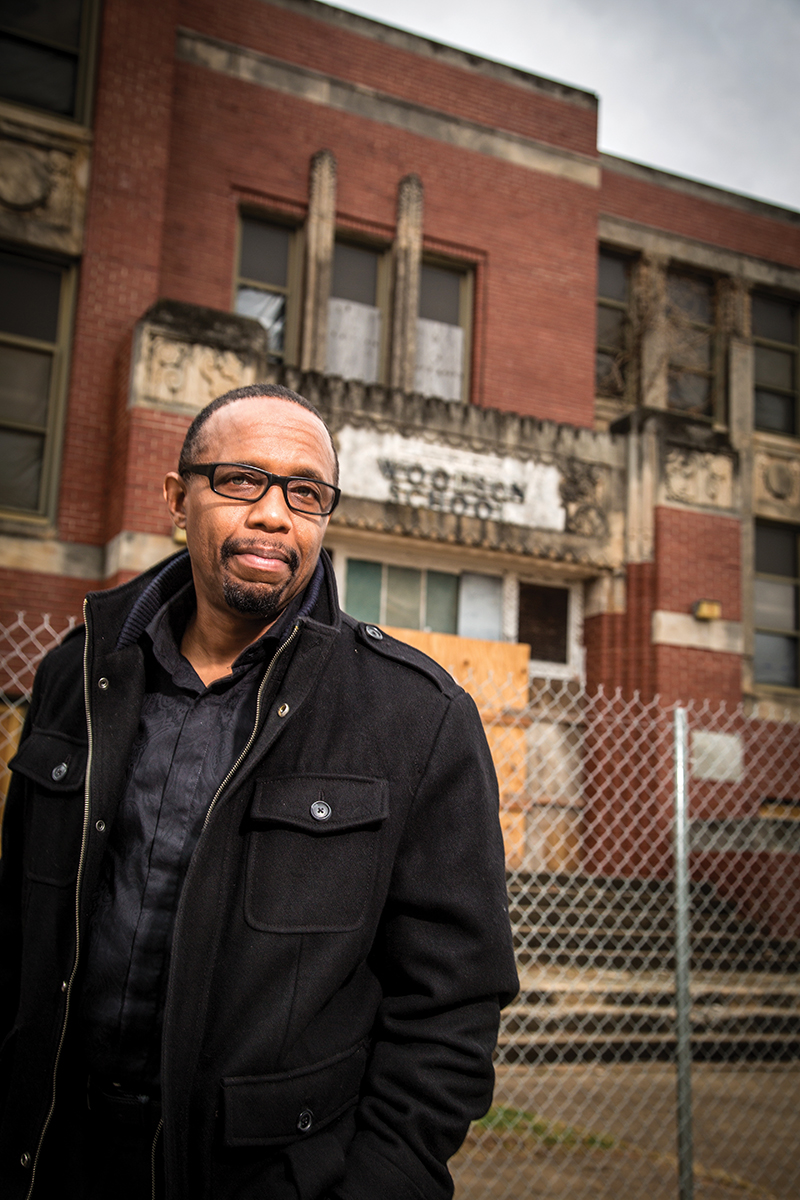 “In the past, development was done to them. But now we are trying to do development with them,
with the community.” – Michael Eric Owens

After purchasing the building two years ago, Ron Bradshaw announced a plan to turn the school into an apartment complex offering more than 60 affordable housing units.

Owens said Bradshaw has worked to hire local and minority-owned construction crews to prepare the site for its renovation, and there has been a close conversation with the community about the process, which was not always the case with past plans for redevelopment.

“Ron was so committed to ensuring he has some diversity with his project,” Owens says. “The first contractor he had put up his fence was a minority contract. He is sort of doing things the right way.”

The new mixed-housing building will complement other recent construction in the surrounding John F. Kennedy neighborhood, which has seen more than 120 new homes built over the past few years.

An even more ambitious development plan might be at the intersection of 23rd and Martin Luther King Jr. Boulevard, where a new Uptown Market grocery store hopes to anchor new businesses and residential units. 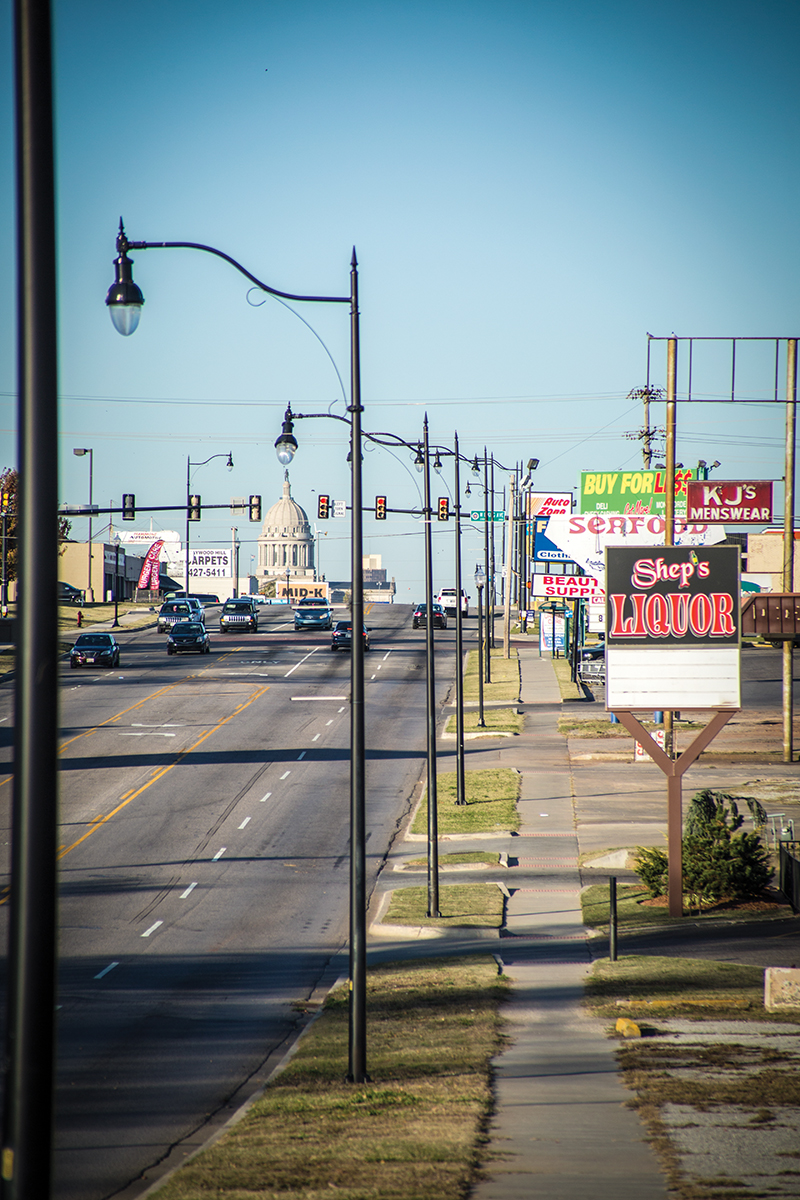 “[Northeast] Oklahoma City has been forgotten for a long time,” says John Pettis, the city council representative for Ward 7. “We lack the retail development of other neighborhoods, but that is going to change.”

Pettis, who has been drumming up support for development in the northeast since his election to the council in 2013, said the newly created TIF district will help build a new grocery store that will anchor the new development. Pettis spoke about the coming development at a September town hall meeting that he said drew more than 1,000 residents from the northeast.

“[Getting over 1,000 people] at the town hall shows that the people of northeast Oklahoma City care about what is happening in the northeast and are in support of it,” Pettis says.

Standing in front of the future grocery store while waiting for a bus, Camilla Wise said she’s hopeful that what’s been promised will be delivered.

“You can look around and see we’ve kind of been forgotten here in the [northeast],” Wise says. “I’m just happy we might have more options here instead of having to travel to other parts of the city.”

Alliance for Economic Development president Cathy O’Connor said the impending project, referred to as King’s Crossing, could provide the spark for future development the community has been missing. 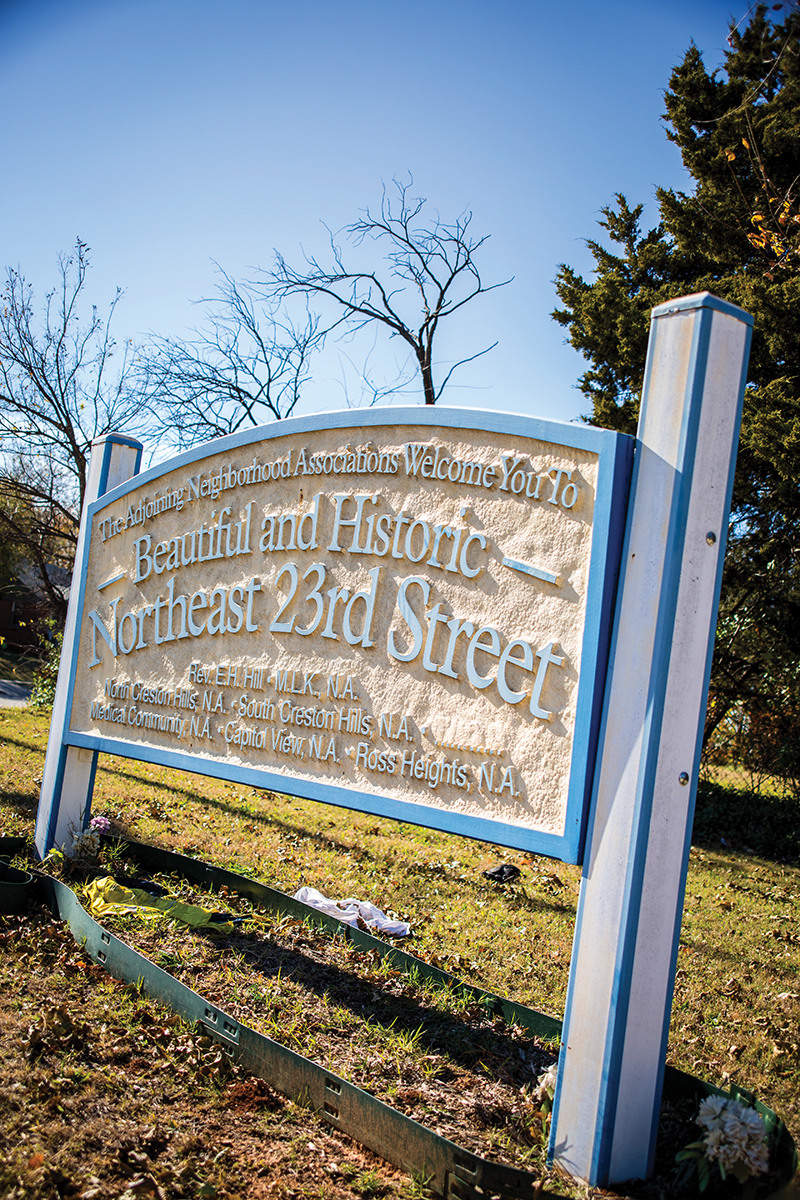 “[This] will serve as encouragement for other landowners to renovate the area,” O’Connor said last August. “The area is on the cusp of an overhaul and ready to provide the community with great offerings.”

For Summers, who has hung onto hope that his neighborhood had better days ahead, the plans seem to have more substance and vision than those that have come in the past.

“I think it’s great, but you know, talk is cheap,” Summers says. “I want to see them do something because it’s always been the city saying, ‘We will do this’ and ‘we will do that.’ But nothing ever came.”

When asked if he thought the current plans including King’s Crossing and the new Page-Woodson school would lead to actual change, Summers paused before letting loose a smile.

“I think this might be different,” he says. “I’m hopeful.”