New Orleans Bound: Heading Down to the Big Easy - 405 Magazine 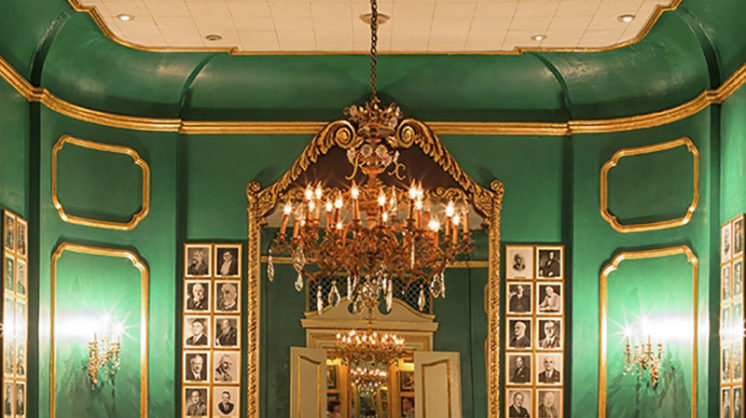 “Do you believe in ghosts?” My hostess paused thoughtfully before answering, “I’ve never seen one, but everyone in New Orleans has a ghost story.”

In 2018, New Orleans will celebrate the 300th anniversary of its founding by Jean Baptiste Le Moyne, Sieur de Bienville. The oldest building in the district, the Ursuline Convent, dates back to the mid-1700s. About a dozen structures pre-date the 1803 Louisiana Purchase. Strict preservation laws protect the original city site, the French Quarter. In my travels, it is the most unusual historic area in America. It’s no wonder no one, not even the dead, wants to leave.

As the Mississippi River winds sinuously toward the Gulf, one of its most dramatic curves is cradled by the 78-block section of New Orleans known as the French Quarter. René-Robert Cavelier, Sieur de La Salle, discovered the mouth of the Mississippi in 1682, claiming all the lands drained by the river for France. Although the Spanish held sway from 1763 (Treaty of Paris) until 1800 (Treaty of San Ildefonso), the French influence was thoroughly entrenched in the city.

In spite of a surfeit of extroverted characters, the French Quarter has an air of secrecy about it. Plain walls and closed shutters line many streets. It’s only when you look up at the lacy balconies festooned with flowers and flowing greenery that you get hints of the rich life within. Many of the buildings have enclosed courtyards, lovely outdoor spaces with plenty of privacy.

Strolling through the streets and down alleyways is the surest way to get a sense of the city. Royal Street is noted for interesting shops with silver, jewelry and antiques. Decatur, which passes in front of Jackson Square and by the must-try Café du Monde, bustles with visitors. Bourbon Street – seamy with a dollop of raunch! Street performers and artists can be found on many street corners and down quiet side streets. 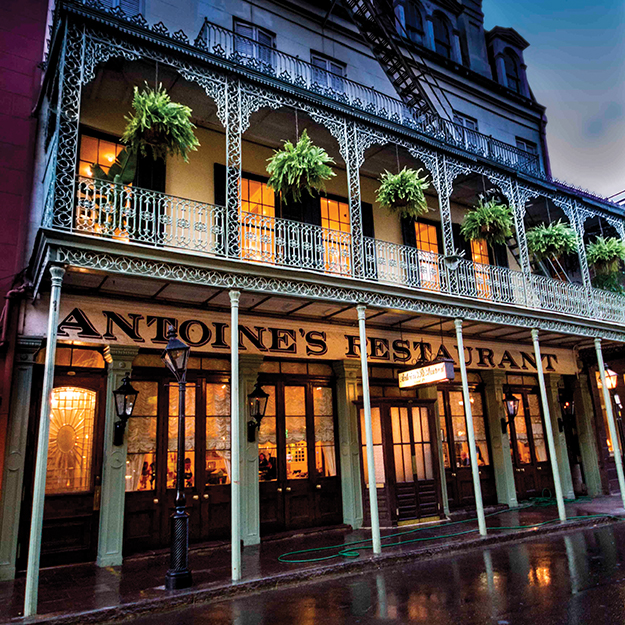 If you walk enough, sooner or later, you’ll meet Jennifer Jones, the Dancing Queen of New Orleans. She sings and prances down the sidewalk and, if you engage her, she’ll soon tell you about her dad, musician and composer Joe Jones, and how she likes to make people happy with her music.

Historic New Orleans Tours offers a number of guided walking excursions. I can recommend the French Quarter and Garden District tours. A variety of other tours include everything from hurricanes, as in Katrina, to Hurricanes, as in Pat O’Brien’s.

To see the riverfront in a more leisurely way, take a cruise on the Steamboat Natchez, said to be the only true steam-powered sternwheeler on the Mississippi. The lunch cruise offers scenery plus a chance to sample traditional New Orleans fare – fried catfish, red beans and rice, jambalaya, collard greens and Louisiana’s most ubiquitous dessert: bread pudding. Other options include a Sunday Jazz Brunch Cruise or a Jazz Dinner Cruise.

Traditions of the Table

Three things you can’t leave New Orleans without eating: a po’ boy, a muffuletta and beignets. At Johnny’s Po-Boy Restaurant, you can get almost anything in a po’ boy – from alligator sausage to veal cutlets. Mine had fried shrimp, lettuce, tomato, mayonnaise and pickles.

If the po’ boy was big, the muffuletta was bigger. Purportedly created at New Orleans’ Central Market, it has definite Italian roots. The bread is a giant Sicilian sesame bun the size of a luncheon plate; the filling, stacks of a variety of Italian deli meats and cheeses topped with a spicy Creole olive salad.

The beignets – these have to be eaten at the Café du Monde, established in 1862. Beignets, brought to Louisiana by Acadians, are fried puffs of dough liberally sprinkled with powdered sugar. They are typically accompanied by bitter chicory coffee or café au lait. It’s a great way to start the day. 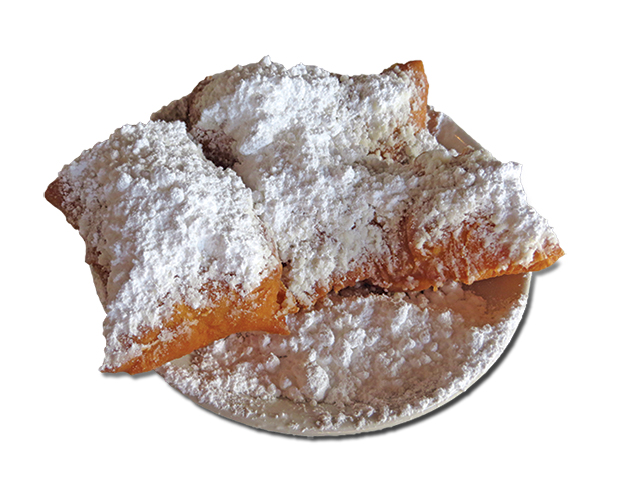 For the most historic dining experience in this town, dinner at Antoine’s is a must. Save up your calories – the classic French sauces brought here by Antoine Alciatore are still on the menu. Antoine’s, now owned by the fifth generation of the family, is the oldest, continuously operated, family-owned restaurant in the country; in business since 1840.

The weekend Jazz Brunch at Commander’s Palace is a delightful tradition, but even a weekday lunch is a special occasion. Not as old as Antoine’s, Commander’s does date back to the late 1800s. A turquoise and white Victorian beauty, it is located in the Garden District, the area where wealthy Americans settled after the purchase – a decision which was fine with the older, French-speaking, Catholic population.

Lunch was leisurely – almost two hours – but the service was not inattentive, and the food was excellent. I was particularly impressed with my dessert: a watermelon/lime sorbet served in a crystal clear, edible, sugar cup. It looked like the scoop of sorbet had splashed down into clear water.

For more contemporary dining, the seafood restaurant Pêche was a great choice. Close to the Omni Riverfront, one of my two hotel hosts, it was handy to several good museums.

My first hotel was the Omni Royal Orleans where I got my first good look at the French Quarter from my balcony. Both the Omni Hotels were excellent – nice rooms and great staffs. The location of the Royal Orleans was ideal for exploring the historic area on foot, but the Riverfront would be a good choice for those needing to be close to the convention center or desiring more convenient parking. Note: The French Quarter wasn’t built for 21st-century traffic!

As far as I know, there are no ghosts at either hotel, but if you don’t mind a possible spectral guest, there are several other choices in the Quarter. The 1886 Monteleone, owned by the fifth generation of the founding family, claims several ghosts. The most persistent story is about Maurice Begere, a 3-year-old who became ill and died while staying at the hotel. He’s been known to toddle into guest rooms but, like Casper, he’s friendly. 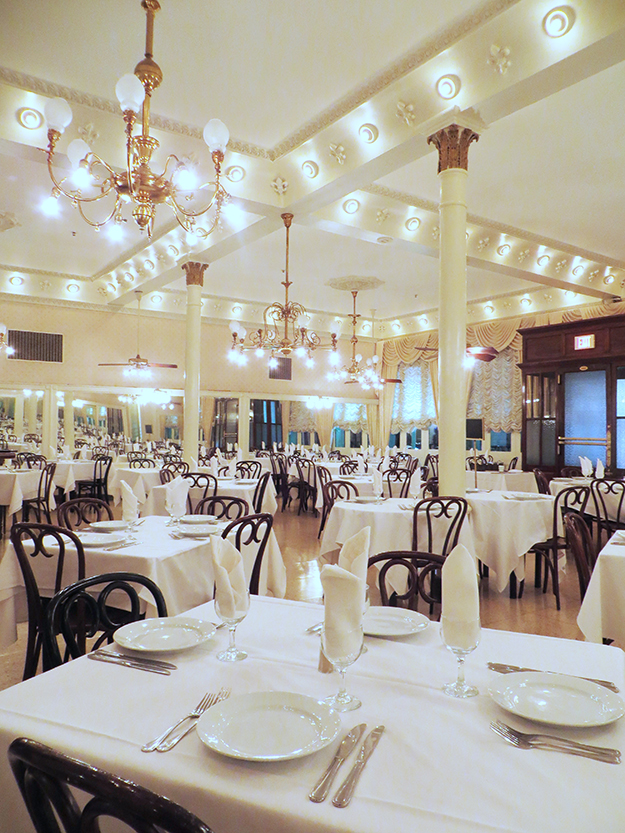 I visited a couple of accommodations belonging to the New Orleans Hotel Collection, a group of independent, locally owned, unique properties. The Bourbon Orleans is a charming historic hotel that’s been treated to a multi-million-dollar restoration. Check out the O Bar, where you’ll find not only the latest libations but also a genuine Ramos Gin Fizz, shaken for 12 minutes. A couple of these and you won’t mind the spectral nun in the hotel hall.

For the utmost in elegance and privacy, Audubon Cottages (another NOHC member) is the choice of connoisseurs and celebrities. Elizabeth Taylor stayed there 27 times in her favorite, Cottage #1. Originally late 18th- and early 19th-century Creole homes, these seven structures have been transformed into one- and two-bedroom cottages with private courtyards and access to a central courtyard and pool. The ghost here is a polite gentleman gambler who goes out on a balcony to smoke.

Ghosts or no ghosts, New Orleans haunts visitors with its beauty, its food, its history and its quirkiness. Short stays just won’t do. Take your time – stroll, sip, sample, savor – and make some memories in this unique Southern city.

The New Orleans Visitor Information Center at 529 St. Ann in the French Quarter has a great walking tour brochure. 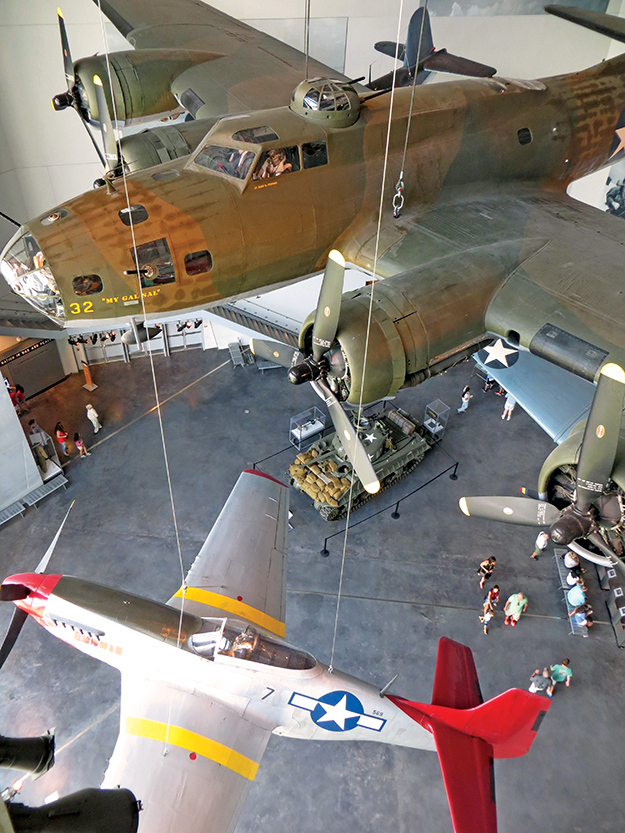 Do Not Miss: The National WWII Museum

► Why is it here? More than 20,000 Higgins boats, landing craft for personnel and vehicles used in all major amphibious landings during the war, were built in New Orleans.

► The experience: Carry a dog tag to follow the story of an individual serviceperson. Top-notch technology leads visitors from the build-up to war to the end.

► Special features: “Beyond All Boundaries,” a 4D film journey through the war, narrated by Tom Hanks. This is one of the most stunning documentaries I have seen – gripping and emotionally wrenching. This is an absolute must!

► Final Mission: The USS Tang Submarine Experience is an interactive re-creation of the craft’s epic last battle, with visitors taking part as crewmembers.

► Time Needed: a minimum of three hours. Plan a longer visit to see all the exhibitions properly. Plan on lunch either at the American Sector Restaurant or the Jeri Nims Soda Shop.