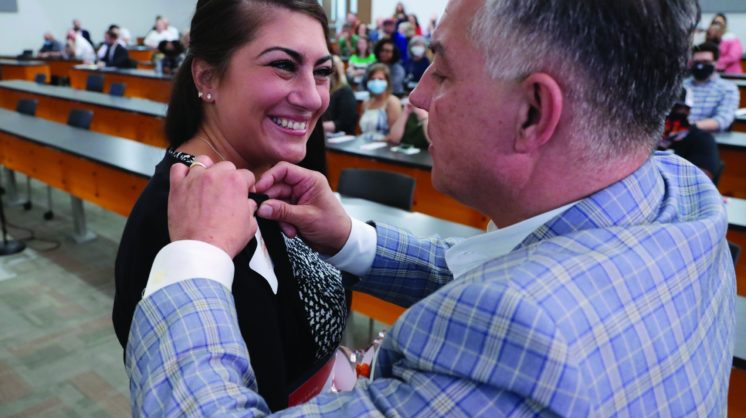 After a once-promising future slipped through the hands of Michael Norris, he got it back – against all odds – through a first-of-its-kind program that is restoring lives and families.  The Center for Social Innovation (CFSI) surrounded Norris with everything he needed to pick himself up and start again. Norris, who abused alcohol and drugs for more than 20 years, learned about CFSI upon leaving rehab. “This is too good to be true,” he said. “I was overwhelmed with hope.”

“This program is for anyone who wants a second chance and is willing to work for it,” said Ariel Moore, senior director of CFSI. “Our mission is to give these beautiful people focus and hope by way of support, opportunity and education.”

It may sound simple, but the work can be incredibly hard for people moving on from addiction, incarceration, homelessness and other significant barriers to success. CFSI offers them the next step upon leaving rehab or a diversion program.

“I’ve never experienced so many people rooting for me,” said Norris, who plans to earn his associate degree in addiction counseling in 2023. OSU-OKC even took care of unpaid fees he owed from a failed college attempt in 2009 so he could reenroll.

Norris is one of six 2021 program graduates who also earned Peer Recovery Support Specialist certification through the Oklahoma Department of Mental Health and Substance Abuse Services so they can help people struggling with addiction.

Participants are given new laptops that are theirs to keep, school supplies and lunch in the cafeteria every day they are on campus. CFSI pays them a stipend for their time spent in the program, and connects them with an internship to gain workplace experience.

Jefferson Jefferson said CFSI gave him a second chance at a new life.

“I’ve been in prison. I’ve been homeless, but I learned from it, and today I’m standing here,” he said. “I never thought much about hope and courage before I got here … it works.”

Moore said the program “was born out of a dream in the heart of Brad Williams,” the former OSU-OKC president, now at Dallas College, whose sister-in-law lost her struggle with addiction seven years ago.

When money to fund the program arrived in July 2020, Williams said the leadership team debated whether to take time for extensive planning or “just gun it and watch what happens.”

A few weeks later on Aug. 14, they hosted an orientation for 17 students entering the new program.

“We were scared,” Williams said. “When you start dealing in hope and put hope on the table, you gotta back that up.”

Nine months later, he returned to the campus and told the first 10 graduates from the program that years from now they will look back and “know that you helped construct one of the most meaningful, impactful programs in the state of Oklahoma.”

Dar Yasseri, vice president of student experience at OSU-OKC and a founder of CFSI, said the program is a personal journey that is sustainable for the individual, not a one-size-fits-all.

“I can’t imagine these individuals’ courage and tenacity breaking down barriers,” Yasseri said. “Everyone is different. Everyone has dignity and everyone deserves an equal playing field. And everyone has insecurities and wants to be accepted.”

Lakota Thompson not only graduated from CFSI in May, but also obtained her associate of science degree in enterprise development.

A high school salutatorian who went to college on basketball and academic scholarships, Thompson decided to step out her junior year because she was dealing with depression and anxiety. She attempted suicide, turned to alcohol and was arrested four times, spending time in jail and rehab.

Getting back on track “seemed almost impossible,” Thompson said.  “But because I had the support of those around me – my mom, my classmates, everyone here – I managed to realize that my life does have purpose and that I am strong.

“People believed in me, and it helped me learn to believe in myself,” she said.

“That’s who goes to prison if we don’t have programs like this, and it kind of breaks your heart when you get to know who they are and their stories and what came before,” said District Judge Kenneth Stoner, who presides over drug and DUI diversion courts in Oklahoma County.

Couple that with lack of housing, confidence and job skills training, and they face significant barriers to getting into the workforce, he said.

“Success is not just possible, it’s predictable,” Stoner said. “People can and do change. Whenever they have the right support, encouragement and have their needs met, they do change and become healthy and instead of stressing our system, they actually contribute to our system.”

CFSI graduate Michelle Tubby said she wants to contribute by working for a nonprofit that helps children and people with disabilities. She plans to earn an associate’s degree in American Sign Language from OSU-OKC.

Tubby said she received almost no formal education after she was expelled from school in the third grade, and by age 11 she was using meth and working as a drug mule. Her involvement with drugs landed her in juvenile and adult detention. She heard about CFSI at drug court.

“I’ve gained a lot of knowledge and skills. The program teaches me so many things that I never thought I’d know,” Tubby said. “I get so overjoyed by it.”

Program supporter and community volunteer Shellie Greiner acquired a donated car for Tubby, who got her driver’s license in May and now can get to campus and to work on her own.

“At CFSI, we want to give people with challenged backgrounds the purpose, hope and support needed for them to find long-term success and happiness,” said Moore, who was selected to head the program in part because the participants’ story is her story too.

“We’ve all been hurt, embarrassed, lost, experienced regret … We’ve all agreed that our brokenness makes us who we are today,” Moore wrote in a letter to the first graduating class.

“I watched each of you find pieces of yourselves that you didn’t know existed. You stood up straighter. You laughed harder and you were more sober than ever before … You are not better than anyone, but you damn sure are as good as everyone.”