Not Forgotten, and Gone: the Fate of the Battleship Oklahoma - 405 Magazine 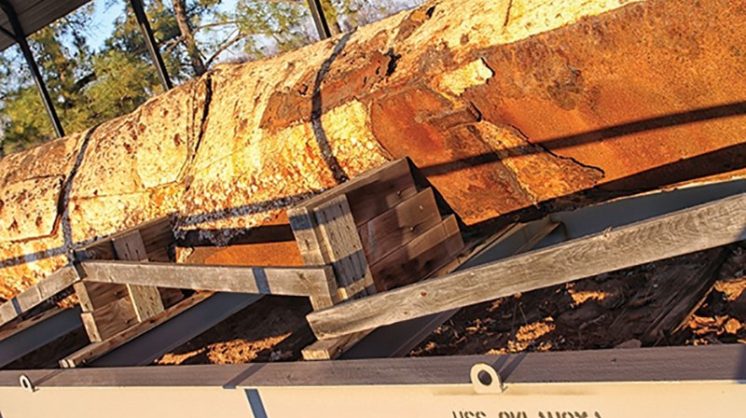 The Japanese Torpedoes And Bombs Were Bad Enough.

They tore into the USS Oklahoma without warning, ripping holes in its hull up to 40 feet wide. The battleship filled with water and capsized to port in 12 minutes, stuck at a drunken 150-degree angle by the tip of its masts digging into the mud at the bottom of Pearl Harbor.

Some say that even worse than the violent attack of December 7, 1941, were the days that came afterward, when hundreds of sailors were trapped in the submerged wreckage. As the fires cooled and the din of battle quieted, and the United States officially entered World War II, the harbor echoed with the sound of desperate crewmates banging and tapping from the overturned ship, trapped in oily water in an upside down world. On the Oklahoma, rescuers frantically used hammers and chisels to try to cut into the armored hull. Thirty-two men were rescued. Many more were not. Of the 2,166 officers and enlisted men on the ship, 429 died.

All but three of the battleships damaged in the December 7th attack lived to fight another day. But the Utah, Arizona and Oklahoma were too heavily damaged. The Utah and Arizona – and the remains of the men who died onboard – stayed in their watery graves.

More than two years after its sinking, the Oklahoma was pried from the bottom of the harbor and turned right side up. Of the hundreds of bodies on board, only 35 could be positively identified. The rest were buried nearby in a mass grave at the National Memorial Cemetery of the Pacific, where they lay in 61 caskets beneath headstones declaring the identities of the bodies within “Unknown.” There they intermingled in the Hawaiian soil for nearly three-quarters of a century.

On April 14, 2015, the Department of Defense began notifying families of the fallen that the remains of the crewmen of the Oklahoma would be exhumed. New DNA technologies will be used to identify the bones, which will be returned to next-of-kin with full military honors. At last, each man who died that December day will be laid to rest at a place of his family’s choosing, beneath a marker bearing his name.

For the ship, the preparation for the exhumation of the USS Oklahoma began July 15, 1942. Through a series of derricks, steel cables, hydraulic winches and repairs, the overturned ship was righted and brought into dry dock December 28, 1943. It was decommissioned the next year, stripped of its superstructure, repaired enough to make it suitable for towing and painted a protective coat of red.

The ship that had cost $75 million to build, equip and, later, modernize was sold to a salvage company in San Francisco for $46,126 and faced being sliced into scrap – or as the sailors said, cut up into razor blades.

So it was nearly two years after the end of World War II, in May 1947, when two tugboats named the Hercules and the Monarch began towing the ship to San Francisco. An Oklahoma delegation of 500, including then-Governor Roy J. Turner, planned to meet what was left of the USS Oklahoma for one last goodbye.

A ceremony was planned for Memorial Day 1947.

But the ship had other plans.

After an uneventful first day out of Pearl Harbor, the Oklahoma developed a list to port, the same side that had been hit by torpedoes. As the days went by, the tilt became more pronounced, shifting to a 30-degree angle. The crew was advised to return to Hawaii for repairs. With little warning, the ship straightened temporarily, then disappeared beneath the waves.

Author Stephen Bower Young, a Pearl Harbor survivor, imagines a ghostly sigh of relief from his fellow crewmen as the ship sank a second and final time: “Good for you, Oklahoma! Go down at sea, in deep water, as you should, under the stars. No razor blades for you. They can make ’em from the Japanese ships and planes that did you in. So long, Oklahoma! You were a good ship.”

The USS Oklahoma was finally at rest, buried at sea.

Headlines followed the U.S. Navy’s new battleship before it even joined the fleet. Named in honor of the first state of the 20th century, it was to be christened by Lorena Cruce, the only child of Oklahoma’s second governor.

The state was thrilled by the honor, but wrestled with a moral dilemma, given its history as the only state to enter the Union with a ban on alcohol. The 19-year-old Cruce explained to reporters 101 years ago: “Oklahoma, you know, is a prohibition state, and father was deluged with letters from ministers and Prohibitionists asking that mineral water be used. But you know, the sailors are superstitious about it, so it was champagne for the christening.”

And so it was. The New York Times of March 24, 1914 reported the scene from the shipbuilding yard in Camden, N.J. under the headline “GIANT U.S. WARSHIP TAKES THE WATER; Governor Cruce’s Daughter, Half-Indian, Names the Fighting Oklahoma,” adding:

“… the bottle of champagne crashed smartly on the prow of the superdreadnought the cheers of patriotic Oklahomans vied with the whistles of tugs at the yards of the New York Shipbuilding Company. Just before the big ship was given its name by Miss Cruce, Bishop E.E. Hoss of Muskogee, Okla., in a brief invocation dedicated the dreadnought to the ‘errands of peace and Christianity.’” It was said to be the first time in more than half a century that a battleship launching was preceded by a prayer.

Ninety-three years later, on December 7, 2007, prayers marked the dedication of a memorial to the USS Oklahoma and its crew, near Pearl Harbor. Among those on hand: Lorena Cruce Maldonado, namesake and granddaughter of the woman who set loose the champagne spray that sent the USS Oklahoma on its date with destiny.

Among the remains salvaged from the USS Oklahoma was one of its three anchors, brought to Oklahoma City in 1960 by Rear Admiral John Kirkpatrick.

The 10-ton anchor was manufactured in Chester, PA in 1919 by Baldt Anchor Company, and added to the ship during its 1927 modernization. Originally on display on Couch Drive near the Civic Center, downtown construction caused the anchor to be moved to a median near the Skirvin Hotel in 1980. Twenty-five years later, new construction brought another relocation, this time to Campbell Park at NW 12th and Broadway, northwest of the Oklahoma City National Memorial.

In 2010, an Air Force cargo plane arrived at Tinker Air Force Base with a 45-foot long chunk of rusting metal dredged up from the bottom of Pearl Harbor. It was the mast of the Oklahoma, recovered during a dredging operation in 2006.

Pearl Harbor survivor Ed Vezey of Moore, then 90 years old, was on hand for the mast’s arrival in June 2010. He described a sailor’s connection to his ship: “It’s your mother, your home, and if you spent a lot of time at sea as we did, it’s the fundamental island of security. This is a piece of the Oklahoma coming home.”

The 25,000-pound mast – rusted and encrusted with barnacles – is on display at the War Memorial Park and Military Museum of Muskogee.