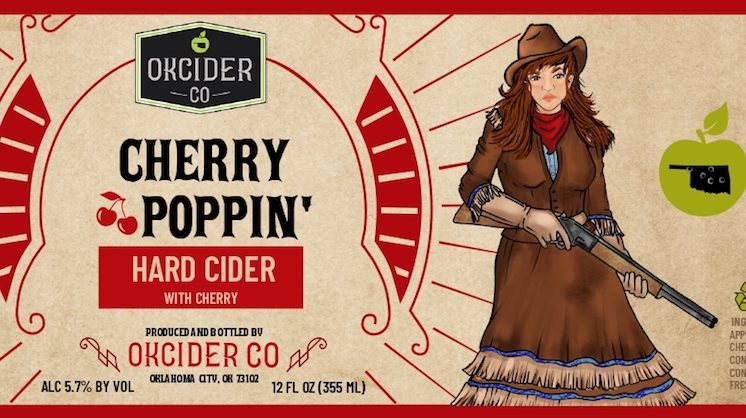 OK Cider is celebrating another milestone this week. The Film Row cidery opened in July 2020, but it started making beer-inspired ciders in 2014, and then started making the beer festival circuit with them in 2017, until it was ready for a brick and mortar. On Oct. 26, it launched their line of bottle ciders, featuring five of its core products.

“We’re releasing four immediately,” said co-owner Tim King. “The Cherry Poppin’ will come out in a few weeks, after we ramp up production.”

King and business partner Luke Hadsall describe their ciders as “beer-inspired” because the idea emerged from King’s quest for gluten-free beer or a good hard cider, and they use beer yeasts in the process. The beeriness isn’t an issue for most drinkers, though. In fact, the ciders taste mostly like cider, not beer, but the structure and yeastiness do come through in a pleasant, layered way so that the ciders avoid some of the cloying sweetness found in big brand hard ciders.

OK Cider started self-distributing last year, so you’ll find taps around town, including Riviere Modern Banh Mi and The Joinery, among others. The taproom boasts 14 taps, with a combination of year-round options, rotators, club-only taps, and one for the kids called Kinder Cider. The five bottled ciders all have a home in the cidery, with the Naughty Apple being the base of more than half their products, according to Hadsall.

The five in bottles are the Naughty Apple, Blackberry Radler, Hop Transition, Morning Delight (yes, a coffee cider that is surprisingly delicious), and the aforementioned Cherry Poppin’. The labels feature famous characters from American folklore: Johnny Appleseed — based on the mural in the taproom — Blackbeard the Pirate, Pecos Bill, John Henry and Calamity Jane.

“Meghan Buchanan is the art director for the cidery, and she’s the artist who designed the labels,” King said. “We intentionally pulled characters from American folklore, beginning with Johnny Appleseed, and I think the labels turned out beautifully.”

They will begin distribution immediately, so start looking for the bottles in your favorite liquor stores and bars.