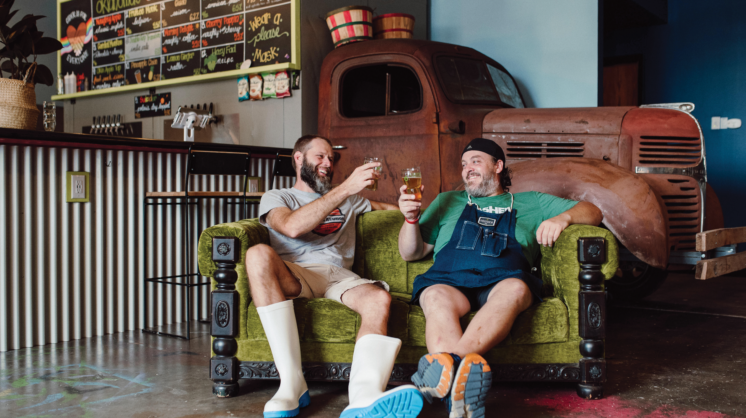 Tim King and Luke Hadsall technically debuted their beer-inspired hard ciders at the Oklahoma Craft Beer Festival in 2017, but they didn’t take their spot on Film Row until July 2020. This Saturday, on July 9, they’re celebrating their birthday on the Row by bringing back some of their greatest hit flavors from the first two years.

“We’re not real big on parties,” King said. “We decided that instead of swag and bands and giveaways, we’d focus on what we do best: cider.”

The taproom has 14 taps, but that includes a members-only cider and a nonalcoholic version they call Kinder Cider. The rest are core ciders and rotators.

“The Naughty Apple is the base cider for 65% of what we do,” Hadsall said. He’s the brewer; King runs front-of-house. “We rely on the yeasts, of which we’ve isolated 14 strains, to drive flavor.”

OK Cider buys apple juice from a variety of orchards in the Pacific Northwest and then crafts the ciders on site. The rustic — inside and out — building is the former home of Plant Shoppe, so it wasn’t outfitted to be a manufacturing facility. Both men have technical theater backgrounds, which came in handy for the build-out, but Hadsall is the main tinkerer. He’s currently rewiring their bottling line, in fact, and four core ciders should be in bottle and on shelves by mid-to-late summer: Naughty Apple, Hop Transition, Cherry Poppin’ and Blackberry Radler.

“For Saturday, we’re bringing back the Blueberry Radler, Raspberry Radler, Mandarin Fluff (sort of a creamsicle), Strawberry Limeade and the Big Naughty Dickel, which was aged in a George Dickle whiskey barrel,” King said.

Because their ciders are inspired by beers — thus the beer yeasts — the radler is made in similar fashion to a traditional radler or shandy: beer plus lemonade. For OK Cider’s, Hadsall adds fruit and lemon juice to the Naughty Apple base. Across the spectrum of ciders, he likes to hit the 5.5-6.5% alcohol by volume goal to keep their products sessionable and to focus on the flavors.

King said the cidery is still self-distributing, and many local bars are happy to work with local ciders. “We’re still up against it in some places, though,” he said. “We’re competing with big name brands, and honestly quality local costs a little more, but we’re producing an excellent product.”

The Saturday event runs from noon to 11 p.m. King said they’ll have pop-up shops with art vendors early in the day and food trucks all day, including Lively’s Rollin Smoke BBQ and Callahan’s Chicago Dogs. They’re also offering specials on merchandise throughout the day. OK Cider is an all-ages tap room.