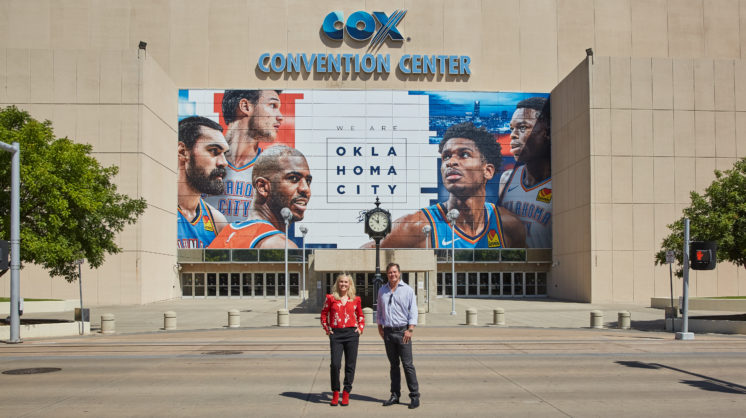 The city council on Tuesday granted Oklahoma City-based Prairie Surf Media (PSM), the rights to establish Prairie Surf Studios in the Cox Convention Center in Oklahoma City. The new entity will house the largest clearspan soundstages in the Midwest.

Rachel Cannon and Matt Payne, co-chief executive officers of PSM, in jointly announcing the new partnership, said Prairie Surf Studios will encompass more than 260,000 square feet of production space including 140,000 square feet dedicated to five clearspan soundstages ranging from 25,000 to 32,000 square feet each. The production facility will also offer attached hotels, a diner with a separate kitchen, a commercial-grade kitchen and an underground tunnel system connecting to shops, hotels and restaurants.

Cannon and Payne, who have both spent decades working in the entertainment business in Los Angeles, saw an opportunity in their home state to help elevate the industry by providing infrastructure.

“We are passionate about empowering storytellers while creating jobs that will truly create economic diversity for Oklahoma. The entertainment industry is not just actors and directors. Each production is packed with high-paying jobs that range from construction workers and electricians to accountants and tech. With unemployment at an all-time high, we want to show Oklahomans how their existing skillsets can pivot into this brand-new industry,” they said in a joint statement.

“Launching Prairie Surf Media has been a labor of love and we are eager to introduce filmmakers across the globe to our beautiful state,” they continued.