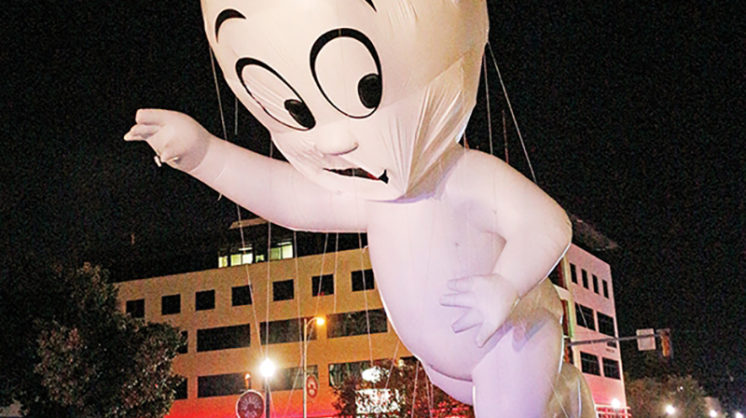 Ghosts, Goblins, Ghouls – probably a few guys dressed up as beetlejuice and a few women dressed as the sexy undead (or vice versa) – will converge Oct. 31 in Automobile Alley for the Air Comfort Solutions Halloween Parade. And perhaps the most famous costumed Oklahoman, Rumble The Bison, will serve as grand marshal.

It is the second year the event has been organized and hosted by Mike McAuliffe and Brent Skarky. The pair took over the parade last year, with limited time to pull it together. McAuliffe – who had attended this parade in the past, and had organized similar events for other groups – decided there did not need to be a year without a Halloween parade in downtown Oklahoma City.

“The coordination of the parade did not concern me,” McAuliffe says. “I was mostly concerned about securing the sponsors needed to cover our expenses.”

With Skarky’s help, he worked to secure those necessary sponsorships from groups and organizations around the metro area to keep the parade alive.

The parade hit Broadway Avenue with 35 entries as the sun began to set. Revelers were treated to groups on foot and in vehicles, and large-scale art projects on wheels. McAuliffe said the Oklahoma City Police Department estimated about 10,000 people lined Broadway on parade night. 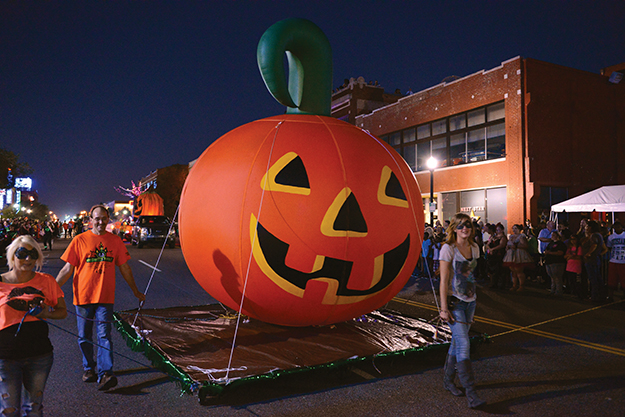 This year, McAuliffe hopes to have at least 50 entries. And with a full year to plan, he said he is on track to host a bigger and better parade with a more family-friendly feel.  “We will have a new children’s area this year, a special grand marshal the children will enjoy and a five-story haunted house hot air balloon on static display.”

McAuliffe hopes the furry bison will bring along some friends. “We will be inviting all of Rumble’s fellow mascots from central Oklahoma to join [him] in the parade.”

Jane Jenkins, president and CEO of Downtown OKC Inc., said the parade is an event that people look forward to each year and, most importantly, one that brings thousands downtown. 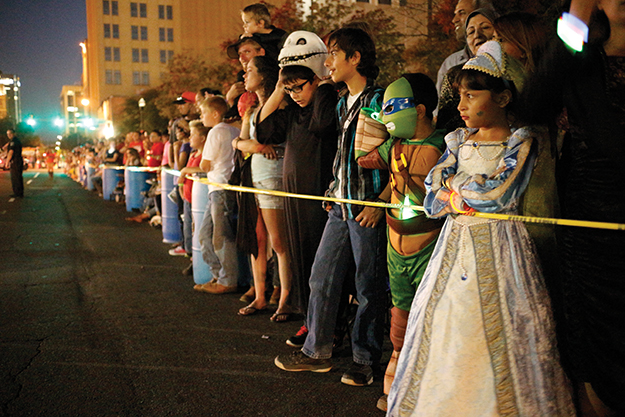 “The Oklahoma City Halloween Parade is always an entertaining experience, and we love how Broadway Avenue comes alive on the night of the event every year,” she says. “The parade’s showcase of talent is so impressive, and it’s an excellent venue for both participants and spectators to express their love of art, music, light and creativity.”

The Halloween celebration has become a yearly tradition downtown after it was started by the Oklahoma Gazette in 2007. For the first few years, it featured the Flaming Lips and their march of 1,000 skeletons, and since has evolved into a celebration of arts and creativity in central Oklahoma that celebrates the bizarre and macabre.

This year, the parade will return to Automobile Alley on Halloween night, stepping off at 7 p.m. The route will begin at NW 13th Street and Broadway Avenue and head south to NW Fourth Street. At the conclusion of the route, some of the floats will return and be on display during the Zombie Ball – which takes place after the parade and includes entertainment, food and drinks. To scare up more information, visit okchalloweenparade.com.