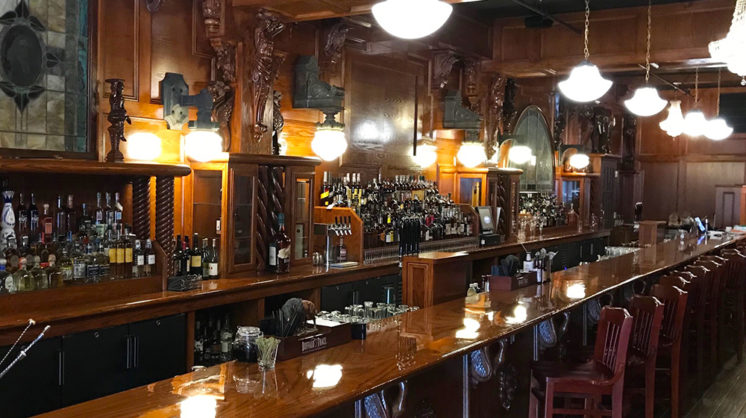 Oklahoma City’s newest restaurant, McClintock Saloon and Chop House, opened in Stockyards City on Monday. The concept, owned by Michel Buthion – who also owns La Baguette Bistro – and Lindsay Ocker, will be dinner only for at least its opening week, but will eventually serve lunch and dinner.

Ocker (pronounced “ochre”) opened McClintock Boots in the same location, 2227 Exchange, in 2002. Two years ago, Buthion remembers, he walked into the boot shop and announced to Ocker: “I’m here to kick you out.”

“I grew up in France, and like any young boy, I wanted to be a cowboy,” Buthion says. “A few years ago, I took a trip to Nashville and visited several saloons. I wanted one in Oklahoma City.”

Ocker informed Buthion that he, too, had always wanted a saloon, so in Western style, the two shook on it, and the idea was born. The partners have investors, but the faces of the restaurant will be Buthion and Ocker, as well as a veteran food service team that includes Mikey Harper – formerly of WSKY – as bar manager and Benjamin Miller as director.

Bringing in Harper was a solid move, as he is one of Oklahoma’s most respected whiskey experts, and McClintock will have more than 200 whiskeys behind their 52-foot bar – the longest straight-line bar in the metro. The menu also includes classic cocktails and updated versions of the classics, and the wine list is impressive, as well.

The heart of the menu is meat, especially steaks, chops, lamb and veal shank. Fresh oysters from the East and West markets are available daily, too, as are fish features and shrimp cocktail. Basically, it’s an old-school chop house, just like the proprietors wanted. Chef Roy Green oversees the menu, which includes, according to Buthion, the “best fried chicken in Oklahoma.”

McClintock comprises 6,300 square feet, and when the patio is finished, it will add an additional thousand. The capacity is 264 people, so it’s a huge space divided into three separate areas (four once the patio opens). A stage up front will eventually host live music, but Ocker said they have yet to work out the details on musicians and dates.

Lunch service begins at 11 a.m., and final bar hours are yet to be determined. A light menu will be available in the bar until 1 a.m. after dinner service stops at 10 p.m. For now, the restaurant is open Monday through Saturday, but Buthion said they would add Sunday service in the very near future, perhaps as little as two weeks.

By the way, the bar will have 16 stools, but half its length will be dedicated to standing customers – it’s a saloon, after all.