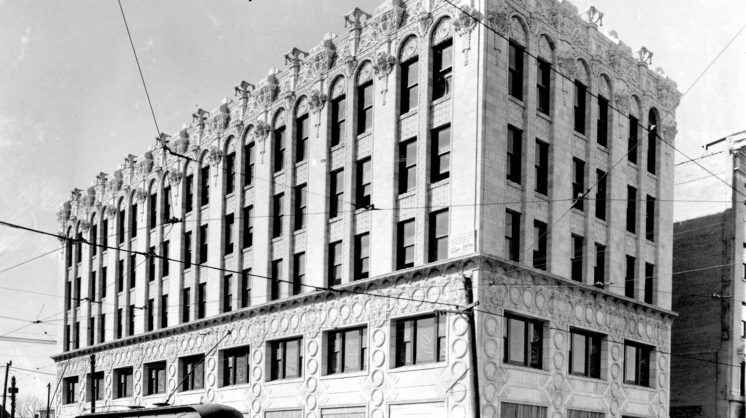 Much of Oklahoma City’s architectural character and skyline is due to the vision of Solomon Andrew Layton (1864-1943). Layton, a noted architect, designed more than 100 Oklahoma buildings in the early part of the 20th century, 22 of which are listed on the National Register of Historic Places. Adhering to his neo-classical and Greek Revival signature, iconic structures such as the Skirvin Hotel, the Oklahoma State Capitol Building, and the University of Oklahoma Bizzell Memorial Library stand today as a testament to the staying power of his design and engineering acumen.

In fact, 11 of the major downtown buildings that sustained damage during the 1995 bombing of the Murrah Federal Building, yet remained structurally sound, are the products of Layton and his partners. These include the Oklahoma City University Law School, formerly Central High School at 800 N. Harvey Ave., and the Journal Record Building, now The Heritage, at 6th Street and Robinson Avenue.

Despite the enduring nature of Layton’s buildings, some of his most impressive works were no match for the Urban Renewal Program of the 1960s and 1970s. The so-called Pei Plan — the brainchild of famed architect I.M. Pei — called for the clearing of hundreds of structures downtown to make way for a convention center, business district, housing area, green space, and shopping mall that was never built. It was to be a “city of the future.”

Two of Layton’s jewels, the Baum and Patterson buildings built in 1910, were lost to Urban Renewal in 1972 and 1975 respectively.

“Probably the most elaborately decorated of any buildings in city history were the Baum (also known as the First Equity Building and later, Fidelity National Bank), and the Patterson (later named the Equity and finally, assimilated as part of Kerr’s Department Store),” according to the book Of the Earth: Oklahoma Architectural History by Howard L. and Mary Ellen Meredith.

The Baum, at the northeast corner of Sheridan and Robinson Avenues, was patterned after a doge’s palace in Venice, Italy, with cupolas, arches, and marble columns, the Merediths wrote. It also featured a 19-foot mural depicting Oklahoma history.

Wrecking began July 19, 1972 and took less than two weeks, according to news accounts.

“Its crowning feature was 12 cast iron baroque lighting fixtures along with the cornice. Each held a huge opaque glass light globe,” the Merediths wrote in Of the Earth.

It also featured solid marble walls and floors and a central vacuum system, which Layton also included in the state capitol. Despite efforts to save it, the Patterson Building was demolished on
Dec. 14, 1975.