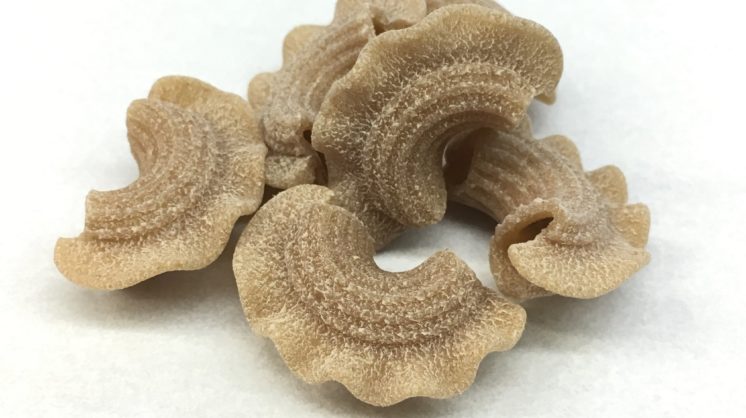 In April, the Wall Street Journalchose Della Terra Pasta’s creste di gallo shape as one of the pastas “You’ve Been Missing Out On.” The OKC pasta maker was one of only two U.S. companies to make the list, and chef-owner Chris Becker said he had no idea it was even happening.

Becker’s professional cooking career began in New York City. From 2000 to about 2010, his resume consists of chef gigs in some of that city’s best restaurants: Lupa, Le Bernardin, Felidia and Del Posto, among others.  “The pasta making developed as a result of being a chef,” Becker says. “I accumulated a skillset at Del Posto – where we made seven pasta doughs and about 15 handcrafted shapes – to delve into pasta making, but that didn’t really happen until I landed in Oklahoma.”

A job at the Rancher’s Club in Stillwater led to the acquisition of his first pasta machine, a “tiny extruder,” and workspace at Urban Agrarian made it possible to practice and “fiddle” with adjustments to time, water temperature and ingredients. He read voraciously, too. Della Terra (Italian for “of the earth”) debuted in March 2011, and he made his first sale in September of that year. “It was spaghetti,” he says. “My first official sale was spaghetti to the OKC Golf & Country Club.”

Becker now offers classes twice a month at his shop just east of Broadway Extension, and also has a fresh pasta program for food service operations. Sparrow Modern Italian in Edmond uses his fresh pasta sheets to make their lasagna.

Customers can find five shapes of Della Terra in retail outlets – they sell six to restaurants – and, yes, they have gluten-free options. Della Terra is available at Whole Foods, some Homeland stores, both Urban Agrarian locations, Oil Tree and Savory Spice. Online ordering is also available from dellaterrapasta.com, and beginning Oct. 1, Becker is starting a gift box and subscription service, in either two- or six-pasta sizes.