OKCs Renters Get The Biggest Bang For Your Buck - 405 Magazine 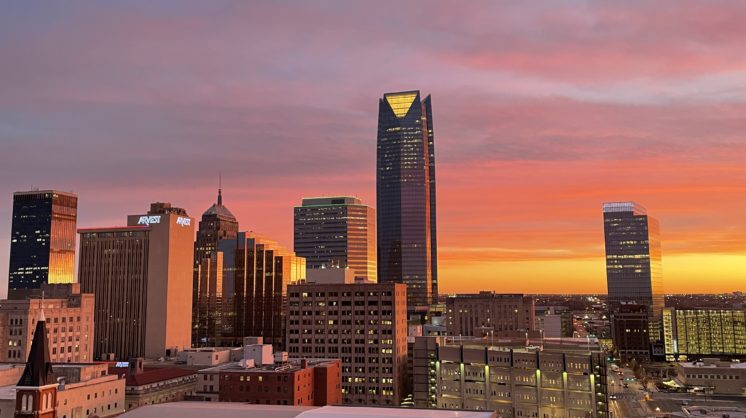 Start with the fact that the average apartment rental rate in Oklahoma City is under $900, and you have a good metric for comparing our rental properties toother major cities. Austin’s average is nearly $1,700, Denver’s is nearly $1,900, and Atlanta’s is $1,800, so exactly double. Cost is just one of the factors in renting, however.

I moved downtown in 2011, and have been happily ensconced in a high rise since 2012: 1,200 square feet, two bed, two bath, and a balcony view of downtown OKC’s skyline. Include utilities and underground parking, and the total tab is under $1,300 a month. By the way, that under-$900 average only gets you about 900 square feet, so as a simple heuristic, apartments in OKC can be had for a dollar a square foot. Yes, there are more expensive options, but where else do you get this quality of life for that price?

Again, though, cost is only one of the factors. Renting allows easier and closer access to the rapidly
developing parts of the metro: downtown, Arts District, Innovation District, Midtown, Bricktown, and Ironworks District. You might say that the edges of the city are developing, too, and it has become trendier to build rental properties in desirable neighborhoods on the city’s north and east edges, but that puts you on the edge of the city. That’s not just a tautology; it matters.

The Thunder are downtown. Scissortail Park is downtown. The majority of the city’s best restaurants and bars are in or near the urban core. You can build the list easily: OKCMOA, Myriad Gardens, Civic Center, Patrono, Barkeep, Film Row, The Study – all in the metaphorical front or back yard of downtown rentals. Sure, you can buy a condo downtown or a house in SoSA, but you can expect to pay $650k and up for that indulgence.

Renting also obviates the need for upkeep. Some of you are handypersons; others like me are not. Toilet on the fritz? Owners are rushing to Lowe’s or Home Depot. We’re sending a work request via online portal, and in my case, I get a maintenance guy the same day nearly every time. Home ownership isn’t just ownership; it’s work, and it’s the kind of work many aren’t interested in, including young professionals, older professionals, and empty nesters looking to downsize.

Given a transient workforce, including workers in the city for a short time—military, consultants, gig workers, etc.—renting also offers the chance to be in the best parts of the city proper for less money and fewer headaches. For full-on Okies like me, it means the chance to live in the midst of everything that is great, fun, adventurous, impressive, and promising about our city.