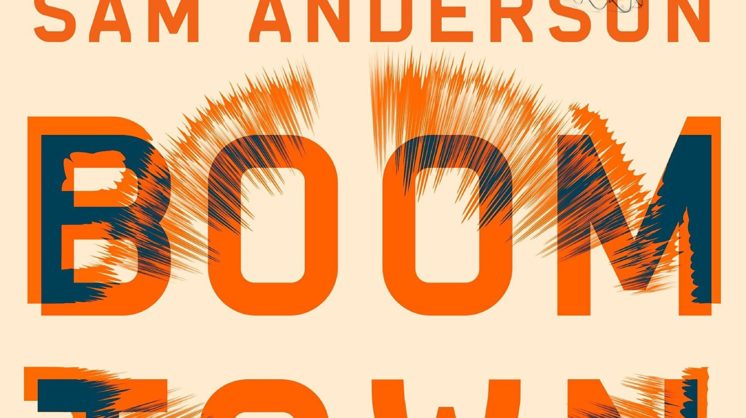 "We'll never know what most cities were like during their very first hour, minute, second. It doesn't even really make sense to ask. Cities are not microwave popcorn.

"Unless you are talking, as we are, about Oklahoma City."

As the United States stretched west and filled in, a hole in the center became its last untamed frontier. It held the promise of one remaining "Gold Rush," a final land of opportunity in a country literally built upon the concept. The ravenous hunger of 19th-century settlers and schemers could only be held off for so long, and the end result was utter chaos.

It is that chaos, stitched for 129 years into the very DNA of Oklahoma City, that takes center stage in Boom Town by Sam Anderson, an award-winning journalist who lives in New York and has had bylines in The New York Times Magazine, New York Magazine and Slate.

"Here's a whole city, and its history is that short. In city terms, that's a blink of an eye," Anderson says. "I felt like it was a story I could actually get my arms all the way around. Here, you can tell the whole story. It felt like a cool challenge."

Originally sent to cover the will-he-won't-he of James Harden's contract extension in 2012, Anderson "got carried away" (his words) and spent the next few years diving deep into our city's history and culture.

I initially was a little wary of a man with so many mentions of "New York" in his bio writing about my hometown. For us Oklahomans, national exposure hasn't always been flattering. NBA Hall-of-Famer Charles Barkley called the state a "vast wasteland" in primetime. World-class food reviewers expressed (with what felt like barely restrained snobbery) their complete surprise at the competence of our culinary artists. Our biggest-ever national stories tend to be those of tragedy and disaster. This "fly-over" city typically is either a punchline or a sympathy case.

Oklahomans do not suffer such outside criticism lightly. Okies are allowed to badmouth or joke about Oklahoma because we endure the booms and busts of everyday life here, but we bristle anytime someone else presumes to speak of our home with the same authority.

Anderson addresses this occasional hubris – Okies prefer the more optimistic term "ambition" – in Boom Town, but my worries about the book were erased in the first few pages. He writes about OKC with all the honesty of a native, but it doesn't come across as offensive because it somehow feels earned.

"My heroes all write giant non-fiction books, so this was something I wanted to do since I fantasized about becoming a writer. I just had to wait for the right subject," he says. "It was not going to be something I felt superior to, or something I felt cynical about. It was going to touch me on a deep level and stoke all my impulses toward empathy, understanding and complexity. Oklahoma City was that for me. The authenticity comes from connecting with people and approaching the place with a real respect and humility."

He certainly put in the work. I counted 26 specific books mentioned in the sources section at the back. He also pored over articles, theses, dissertations and radio archives; local blogs, comment threads and discussion boards; mountains of archives meticulously cared for by the Oklahoma Historical Society. Anderson not only wrote a book – he became an expert. It shines through in his writing.

His process encompassed everything OKC. Everywhere he went, his receptors were open to absorbing every fact, detail and human experience with which he came into contact. Because of this, a four-day trip could feel like a month to him.

"I haven't tallied them up, but it felt like I was here for a couple of years," he says.

His wife, Sarah Uzelac, said writing the book made him "radically open" – which is very out-of-character for him, a writer used to spending much of his time alone – and he said yes to everything, be it parking his car in Choctaw and walking for miles to the city's center to commemorate the Land Run or spending a night in Wayne Coyne's compound during a severe tornado.

"When you're really reporting hard on something, it's like this intense existential transformation you go through where you are this vessel of openness," he says. "The city was just pouring into me. I tried to leave no stone unturned."

In fact, if you popped into Midtown’s Elemental Coffee with any regularity in 2012 or 2013, you might have caught Anderson, typing away at a secret history of the city, in the corner of your eye and thought nothing of it.

"Much of the work of processing, researching and logistics was done at Elemental," Anderson says. "I love that place. It felt to me like a sign of the new Oklahoma City – young, cool, urban, Brooklyn-ish Oklahoma City – where you can get really strong espresso and sit and watch all these place-making young people talk about bike lanes and working on changing the city."

The seed for the story was planted when he was on a plane to OKC for the very first time. He read about how three climate regions – humid, sub-humid and semiarid – "meet and mingle" in Oklahoma to create its unique weather. In the margin, he wrote, "Westbrook, Harden, Durant." He recognized before he even set foot on sacred red dirt the impact the Thunder had and would have on this community, and he made it his mission to tell the story just so.

"The pattern it set transcended the basketball and the weather," Anderson says. "This is a place where lots of different things collide. Those unexpected collisions have very complex and unexpected consequences."

"The result is this fascinating process of Democracy with a capital D: humans having to figure out how to get along," he says. "Everything I read and everything I saw just reinforced that idea further. It happened on every level of every part of this story."

The city's history – even its dark, often unsavory bits under rugs and at the backs of broom closets – cedes control of the pages to the Thunder's history, with all of its soaring highs and crushing lows, then snatches it back in the same way Westbrook and Durant used to tussle over the reins of the offense.

"My affection for this place was a kind of envelope into which everything could go, negative and positive," Anderson says. "The negative stuff – the history of white supremacy – was just part of the story that had to be told. Let's acknowledge all this stuff that happened, because that's a way of making this place even better."

But just like the Thunder team that made it to the Finals, when all the disparate storylines intersect in perfect and unexpected ways, the result is truly magical.

Anderson said his favorite historical discovery he's ever made in his entire career was that of Operation Bongo (pages 26-34). Boeing, based out of Seattle, needed a city – "not too big, not too small, somewhere outside the national mainstream but not so far outside that it was completely irrelevant" – to test the effects of supersonic flights passing overhead on American citizens. That city? You guessed it.

"I couldn't believe it," he says. "I printed out the 400-page report from the National Opinion Research Center from Chicago that had all these graphs about the people of Oklahoma City and their misery in the face of these sonic booms. If I could have invented the best story possible to connect Seattle and Oklahoma City before the whole basketball thing happened, that would have been the story I'd have made up. But I'm not smart enough to think of that. The reality is more interesting than anything you would have invented."

A chapter about on-again-off-again local deity Sam Presti contains an anecdote that is so brilliant I can't even ruin it, but it is the most Sam Presti thing I've ever read. Another section describes active-tornado situations as "a horror movie in which the sky is hunting humans." Anderson's style is almost poetic in its accuracy, and he makes reading about the Land Run effortless and entertaining … much more than I could say for my eighth-grade Oklahoma History class (sorry, Mr. Burke).

Our civic history, the story of OKC, is in the book. The almost-religious obsession with weather wizard Gary England. The acquisition of an NBA franchise, and accompanying accusations of theft. Clara Luper, whose sit-in movement celebrated its 60th birthday just last week. The hypnotic superpower of The Beard – and The Trade. The first attempt to tame the Oklahoma River. “KD is not nice.” The lofty goals of a city planner. Game 7. The bombing. #whynot. Wayne Coyne.

But it couldn't have everything. Anderson said his natural inclination was to make Boom Town, which clocks in at 407 pages when you include all three epilogues, a 750- or 1,200-page book instead, but his editors had different ideas.

"You have to cut out an infinite amount of stuff, streamline and simplify to tell these stories," he says. "You want to inhale everything, you want to honor every human story that's ever happened here. In the end, you just can't, and that's kind of excruciating as a writer, because you're leaving stuff out that you don't want to leave out."

With Oklahoma City – "one of the great weirdo cities of the world" – still aching to be taken seriously, Boom Town gives it a chance to be honestly appraised, examined and celebrated. Maybe even to have another boom. Let your cerulean flag fly.