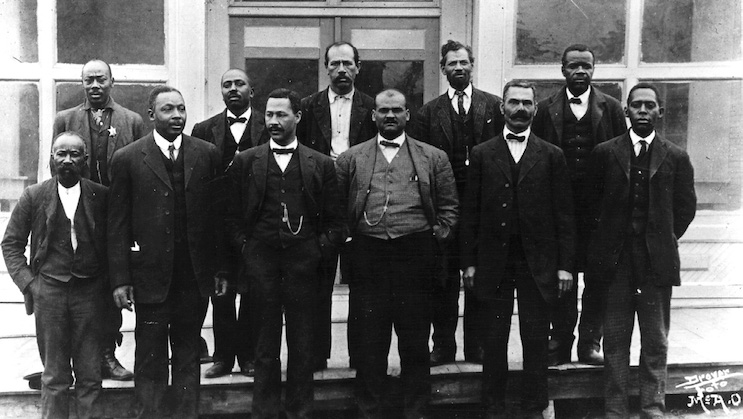 An historical photo of the town council of Boley, Oklahoma, posing in front of the town hall. Boley is currently the largest of the still existing historical All-Black towns in Oklahoma. Photo provided by the Oklahoma Historical Society.

The mayors of Oklahoma’s 13 historical All-Black towns will meet August 20 in Oklahoma City to connect with state agencies and showcase their communities’ histories. According to Donnie Nero, treasurer of the Oklahoma Conference of Black Mayors, this is the first statewide gathering of the mayors on this level.

Nero, a retired educator, lives with his wife, Shirley Ann Ballard Nero, in her hometown of Clearview, Oklahoma, an historical All-Black town. Since 2011, they have been involved in community efforts to support and revitalize the state’s All-Black towns.

In the late 19th and early 20th centuries, more than 50 towns were established in Oklahoma as safe havens for Black Americans. These All-Black towns thrived as residents were safe to develop businesses and support one another’s farms through railroad connections. The Great Depression, coupled with anti-Black state policies that prevented Black residents from receiving lines of credit and acquiring land to grow their towns, caused populations to dwindle. Over the decades, towns lost their schools and other community hubs. Now, only 13 of Oklahoma’s All-Black towns still exist.

“The towns are not what they used to be,” Nero said. “They probably never will be what they used to be, but there’s no reason we can’t be what we desire to be. So if we want to enrich and improve those communities, we’re going to be the ones that have to take the initiative to do that.”

After multiple attempts to bring state agencies to individual towns, the Neros realized that it might be more effective to bring the towns to the agencies. Eight months of planning with the Oklahoma Historical Society have led to the first Oklahoma All-Black Towns State Conference, which will take place Aug. 20 at the Oklahoma History Center.

In the morning, each mayor will get a short chance to present their plans to improve their infrastructure, access and allocation of resources and promote their cultural heritage. Later, state agencies such as the Oklahoma Housing Finance Agency, Oklahoma Department of Transportation, Oklahoma Water Resources Board and others will provide the mayors information about the resources available to them. Nero hopes that by connecting the mayors and agents with each other, they can more easily work together to address the needs of the towns.

Each town has its own priorities, but Nero said there are common issues, such as broadband access. “Problem number two is the infrastructure,” he said. “The streets and the roads are deteriorating, and some of those are inadequate to tour buses or any other large vehicles. So people want to come to these towns, and they have a difficult time trying to turn the corners or maneuver the streets.” Many towns also lack sewer systems, which makes it difficult to develop more housing or attract businesses. The conference will help mayors get assistance from state agents to apply for grants and other financial resources. “I think it’ll be a game changer … having a contact person who will be amenable to the things that we need to move forward.”

An exhibition from each town that showcases its history, plans for the future and unique souvenirs such as books, shirts and mugs will also be open to the public. “We want to tell people where we’re located and how to get to these places,” Nero said. “People leave the conference with those things in their minds and also in their hands to be a reminder of how they can support and help.” As of Aug. 17, over 205 people plan to attend.

The conference runs from 10 a.m. to 4 p.m. and is free to attend. State Senator Roger Thompson will be the keynote speaker and discuss how Oklahoma’s All-Black towns can use federal American Rescue Plan Act funds. Visitors can register for the event on the Oklahoma Historical Society’s website and can prepay $10 for a catered lunch from Florence’s Restaurant. 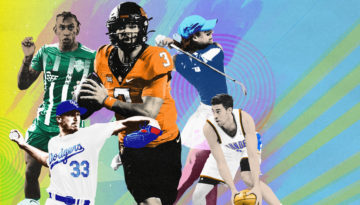