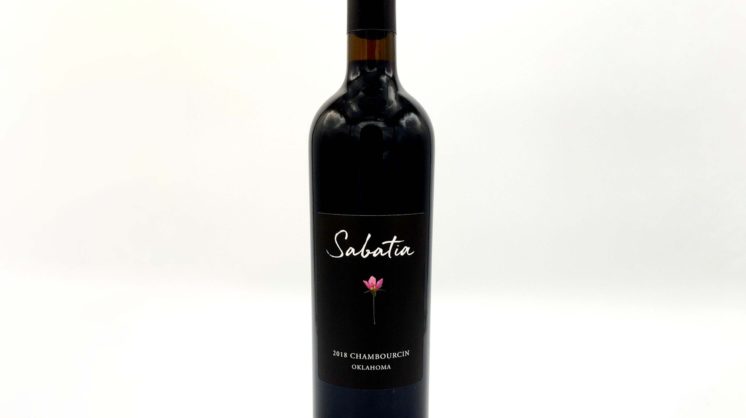 The Oklahoma State Fair wine competition doesn’t often draw the attention it deserves, especially when the winners are local wines. That unfortunate situation is about to change, thanks to the good work of Steve Sneed and his Sabatia (suh BAH tee ya) wines. The Norman-based winemaker who’s worked in software sales, web design and graphic design, named the wines for the profusion of wildflowers that grow on his 10-acre property near Lake Thunderbird.

“Sabatia is one of the wildflowers, and I’m a person who likes names that are tied to a place,” Sneed said. “I’m kind of a traditional guy in that way. I didn’t think spiderwort sounded great, so I went with sabatia.”

The wines, a Chambourcin and a Chardonelle, won the category awards in red and white respectively at the 2021 Oklahoma State Fair wine competition, and the Chambourcin won Best in Show. In fact, Sneed won last year, too, and a Chambourcin has won the best red four years in a row. It’s important to note that the wines are tasted blind by a three-judge panel (Full disclosure: I am one of those judges.), and it’s often competing against wines from other states and better-known growing regions.

What makes Chambourcin so special? In fact, what makes it appear as if Oklahoma has finally found a varietal that can spur winemaking forward in a state that has lagged way behind neighboring states like Texas and Missouri?

“Chambourcin works for wine drinkers because its flavor profile tracks with well-known grapes like Pinot Noir and Grenache,” Ian Bennett, a certified sommelier, said. Bennet is co-owner of The Study, a wine bar in Film Row, and he currently has Pecan Creek Chambourcin on his by-the-glass list. “In fact, it’s very similar to Sonoma Pinot Noir and Spanish Garnacha.”

As to why it’s so promising in Oklahoma, beyond the taste factor, Bennett said, “The technical reason is that Chambourcin is a vitis aestivalis, a family of grapes that does very well in cold temperatures. Grapes like Chardonnay and Pinot are vitis vinifera, and they’re only cold hardy to about forty degrees fahrenheit. The aestivalis grapes are good to minus-twenty. They work in Oklahoma’s cold temperature shifts at night.”

Bennett said he discovered Pecan Creek three years ago at a beer festival. “I’m always on the lookout for Chambourcin in Oklahoma because I tasted one from Missouri several years ago, and I thought it had promise.”

For his part, Sneed said Chambourcin was the first Oklahoma wine he tried that really tasted good. “I work with the Oklahoma Grape Industry Council, so I know several growers. I volunteered at harvests, and some of them gave me grapes to experiment with a few years ago.”

Sneed quickly realized he needed to understand winemaking and grape-growing at a more complex level, so he took courses from three universities: Arkansas (for chemistry), Texas Tech, and California – Davis (a school famous for churning out excellent winemakers). By 2018, he had his first batch of Chambourcin. He’d learned from tasting around the state, too, that wine aged in a barrel always turns out better than adding oak chips or oak powder to wine, so he worked with a cooperage in Missouri to acquire American oak barrels.

The care and attention to detail have paid off. At the recent Oklahoma Restaurant Association event, Sneed was overwhelmed with excited chefs and restaurateurs who were excited about the quality of Sabatia wines, especially the Chambourcin. His production levels are still small, so the recent success — including Best in Show at the fair — has forced him to adapt his plan that had featured slow growth. He’s now working on a new production facility that will quadruple his output, and he’s talked to a couple retail liquor stores about placements.

“I’ve had tremendous support from grape-grower friends, especially when I had to tear out my vineyards,” Sneed said. “I’m working with an excellent grower from Jones, and I’m working on replanting my land.”

He’s replanting with Chambourcin. It’s something many Oklahoma grape-growers should be doing. The climate and soil in the state seem best suited to this little-known grape, but once you taste a good one, it’s easy to see why Oklahoma winemakers are coming around to Chambourcin. Pecan Creek, Put a Cork In It, and Sabatia are leading the way, and owners like Bennett are evangelizing and buying the product. Bennett said he can even assemble a flight of Chambourcin with similar wines so customers curious about this promising new varietal can taste it side by side with wines they already love.

Sabatia is only available by direct sales right now, and Sneed said info@sabatia.wine is the best means of communication until his website is ready to roll out.