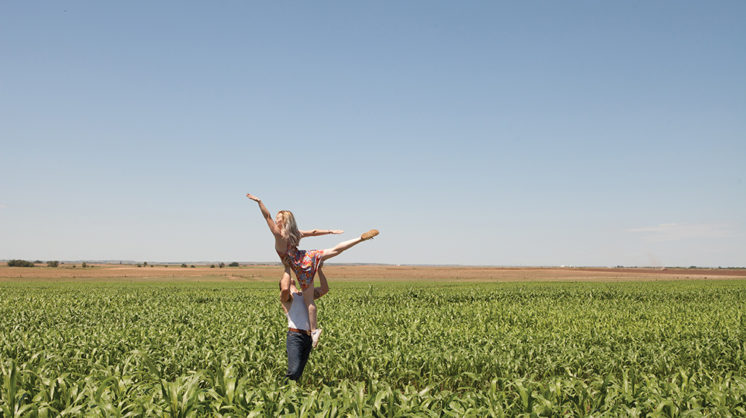 Jared and JoDe Bradt bought two dozen chickens in the fall of 2009 to pull their kids away from video games and teach them a little hands-on responsibility. Ten years on, Bradt’s Menagerie is a petting zoo, attracting thousands of visitors a year to meet and play with more than 100 different animals, from alpacas to peacocks to zebras, and explore a massive hay maze. And the Bradts’ three sons still help run the place.

It was recently featured in a virtual reality showcase at the Houston Cinema Arts Festival, a curated exhibition of experimental dance, animation and abstract storytelling within a 360° immersive environment. Audience members came in to the theater 40 at a time, put on Samsung Gear Virtual Reality headsets and were transported to immersive locations around the world – including Bradt’s Menagerie in Alva, Oklahoma.

Virtual reality is the term used to describe a three-dimensional, computer-generated environment that can be interacted with or explored. Virtual reality films are made using cameras that record 360 degrees of the environment while the action is taking place. Virtual reality headsets then allow the viewer to stand where the VR 360 camera was placed, and explore everything around them from that perspective.

Virtual reality has been the next big thing in film and technology since before the turn of the last century. From The Lawnmower Man in 1992 to The Matrix in 1999 to Ready Player One last year, popular movies have capitalized on people’s fascination with the idea of intricately fabricated environments that are so immersive they feel completely real.

The first Oklahoma feature film to incorporate virtual reality was the 2018 action thriller The Jurassic Games, written and directed by Ryan Bellgardt and starring Ryan Merriman.

Centered on a game show in which death row convicts are forced to compete in a virtual reality game that pits them against dinosaurs and each other, The Jurassic Games was filmed entirely in Oklahoma – its epic battles took place in gorgeous locations from Little Sahara to Quartz Mountain. Perhaps most impressively, all of its realistic dinosaurs were animated by people working in Oklahoma City at Boiling Point Media. Lead animator Stephanie Roach went to Edmond Memorial and studied at Oklahoma Christian University before landing a full-time job doing CGI and 3D animation for feature films.

Boiling Point knew early on that the biggest hurdle to raising money and finding distributors for The Jurassic Games were the dinosaurs themselves. How could they convince foreign distributors that they could create dinosaurs that looked as good as Jurassic Park for a fraction of the cost?

The answer: a one-minute virtual reality experience set in Little Sahara. Roach animated a variety of dinosaurs to roam around and interact with the viewer, capped off by a ferocious T-Rex charging the viewer and leaning in for a big bite. The VR experience worked like magic; the movie was funded and offered distribution around the world.

Last summer, Boiling Point Media demonstrated their virtual reality piece at the deadCenter Film Festival, where their film won the Special Jury Prize for Best Narrative Feature. The VR experience was such a hit, deadCenter asked to include it in their statewide education tour – 3,000 Oklahoma high school students put on virtual reality headsets and interacted with the Oklahoma-made dinosaurs in The Jurassic Games. They gained hands-on experience with new technology that will hopefully inspire them to stay in Oklahoma to pursue their dream job, no matter what it is. And the tour started at the Northwest Technology Center in Alva, just down the street from Bradt’s Menagerie.