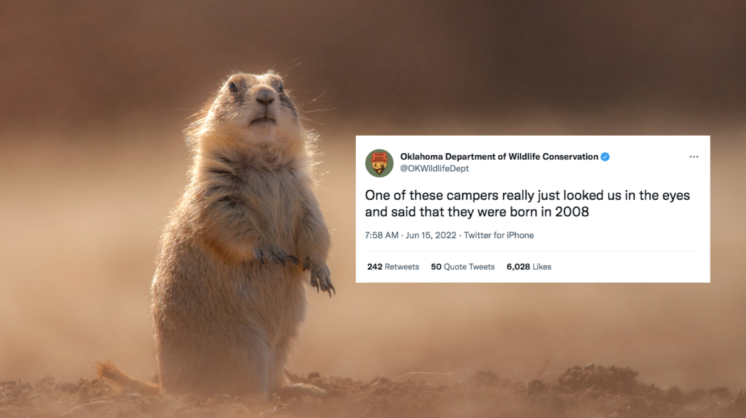 The Oklahoma Department of Wildlife Conservation’s social media team rejected formality in favor of goofy humor that toyed with the audience along with teaching it. The result was the account’s 8,000 followers growing to over 68,000 in less than a year.

Twitter was a different animal for the Oklahoma Department of Wildlife Conservation. A dry, educational tone worked well for the agency’s Facebook and Instagram accounts, but straightforward tweets about seasonal fish stocking weren’t connecting with Twitter users.

Sarah Southerland, the social media coordinator for the agency, took an audit of the account’s audience with the communications team who volunteer and collaborate on social media. They found that their followers were all local people. “Okay, cool,” she said. “We need to just talk the way that they talk.”

Three months into their Twitter overhaul, Darrin Hill, producer for the agency’s show Outdoor Oklahoma, showed Southerland a dated meme of a mountain lion outside that said in block text, “Do not let inside.” Sutherland modernized the concept and posted it. The tweet reached over 100,000 likes.

“Behind how we write on (the Twitter account) comes from how the people around me actually talk,” Southerland said. “They’re loud, and they can be a little funny. You’ve got to speak like a human, and it really works.”

Southerland carried the silly tone over to the agency’s TikTok account, which has over 70,000 followers and 1.5 million likes as of July 8. She often includes department staff in videos, such as asking wildlife experts if people should pet bears (you shouldn’t), bringing a crowd to watch the cleaning of the office’s fish tank, or simply following around biologists in Oklahoma nature and recording their work.

“Everybody who’s on our social media accounts gets asked way ahead of time,” Southerland said. Some get enthusiastic, and others aren’t as interested. “I get that because sometimes, I’m not in (the videos) because I don’t feel like getting dressed that day, you know?”

Part of the accounts’ joke is playing with expectations of how a state wildlife organization would act by responding directly and playfully. “People love direct interaction, and it’s funny that they’re talking to a government agency,” Southerland said. But this conversational approach also helps the department reach new people. “Formality, or only talking to people that you think you want to talk to, is kind of a barrier. We try to be approachable and try to be inclusive so more people can be involved in what we’re trying to do. And it’s working.”

One of Southerland’s favorite accomplishments with the agency’s social media crew was how they promoted their primary source of revenue: “Hot girl fishing license.” She presented it to the team, who didn’t understand it at first. But the tweet exploded, and it allowed the department to teach users how conservation efforts were funded. “It just cracks me up that’s how we did it because it’s pretty dumb,” she said. “It’s effective. Maybe we shouldn’t be so pretentious about what we post online.”

The accounts’ reach has also given the department a chance to teach nonlocals about Oklahoma and push past negative assumptions they might have about the state. “We like that we’re from Oklahoma, we love Oklahoma wildlife, and hence why we work here and why we do what we do,” Southerland said. “It’s just being very sensitive to how we present ourselves as somebody who’s smart but also really cares about what we do.”

The social media team at the Oklahoma Department of Wildlife Conservation knows that viral fame can be fleeting and is subject to ever-shifting algorithms. “Our algorithm might weaken in one week, and it might be super strong the next week,” Southerland said. Navigating these trends can be difficult, but Southerland finds it fun, especially when they’re able to share their love of Oklahoman nature.

“People send us pictures, and they’re like, ‘I got my hot girl fishing license!’” she said. “It’s real people actually sharing stuff that they really care about, and then being excited when other Oklahomans go out and try it.”