Oklahomans Over There - 405 Magazine 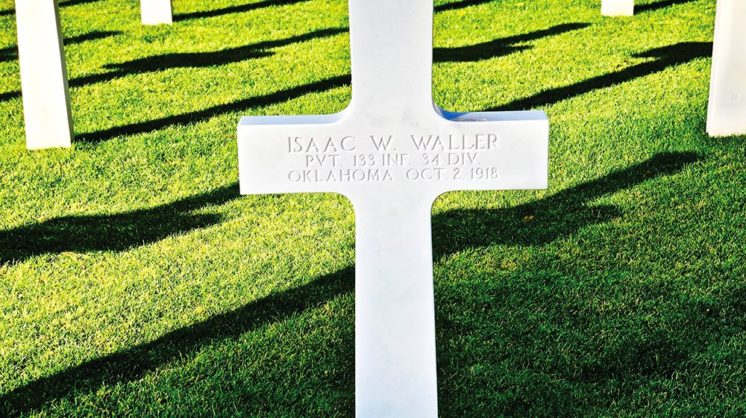 The morning train from London stops at the platform for Brookwood, 40 minutes outside Waterloo station. I am the only one to disembark.

The stairway down leads directly into Brookwood, the largest cemetery in Great Britain. Established in 1854 on 2,000 acres set aside for the dead of London, its manicured paths wind through old-growth trees and English gardens.

Although it’s three hours after daybreak, frost still shimmers on the grass and glistens on the rough edges of century-old grave markers.

I am on my way to visit one corner of the vast burial ground, a section the size of a small park set aside in honor of the American dead of World War I. The Great War, as it was then called, raged from July 29, 1914, to Nov. 11, 1918. This year marks the 100th anniversary of its end.

In the 19 months during which the United States joined the Allies of France, Russia and the United Kingdom on the battlefield, 116,516 U.S. servicemen and women lost their lives. More than 2,000 of them died in the British Isles – lost at sea, killed in accidents, claimed by illness – and were interred in 99 burial grounds across the United Kingdom.

After the Armistice, families of fallen soldiers had three choices: ship their loved one’s body back to the United States; keep the remains in local British cemeteries; or opt for inclusion in a new American cemetery outside London, to be “maintained in perpetuity” in honor of their sacrifice.

Brookwood American Cemetery and Memorial is that promise kept. It is the only American military cemetery dedicated to World War I in the British Isles. The 4.5-acre cemetery-within-a-cemetery is the final resting spot for 468 U.S. veterans, including the bodies of 41 unknown soldiers. Its 467 snow-white crosses – and one Star of David – surround a Beaux Arts chapel with walls engraved with the names and homes of 563 additional servicemen with no known grave.

Amid the storied cemetery, a word is etched 11 times in memoriam: OKLAHOMA.

Eleven fallen soldiers who enlisted at Oklahoma recruiting offices a century ago were part of more than 4 million U.S. troops who would join forces to fight The War to End All Wars. (If only.)

The graves of five of the men are marked by marble crosses, their lives claimed by influenza and the sinking of their troop ship before they made it to the battlefield. They include Harry J. Griffin, a member of the U.S. Army’s 410th Overseas Casual Company. David L. Conner and Michael Zuerlein were assigned to the Coast Artillery Corps. 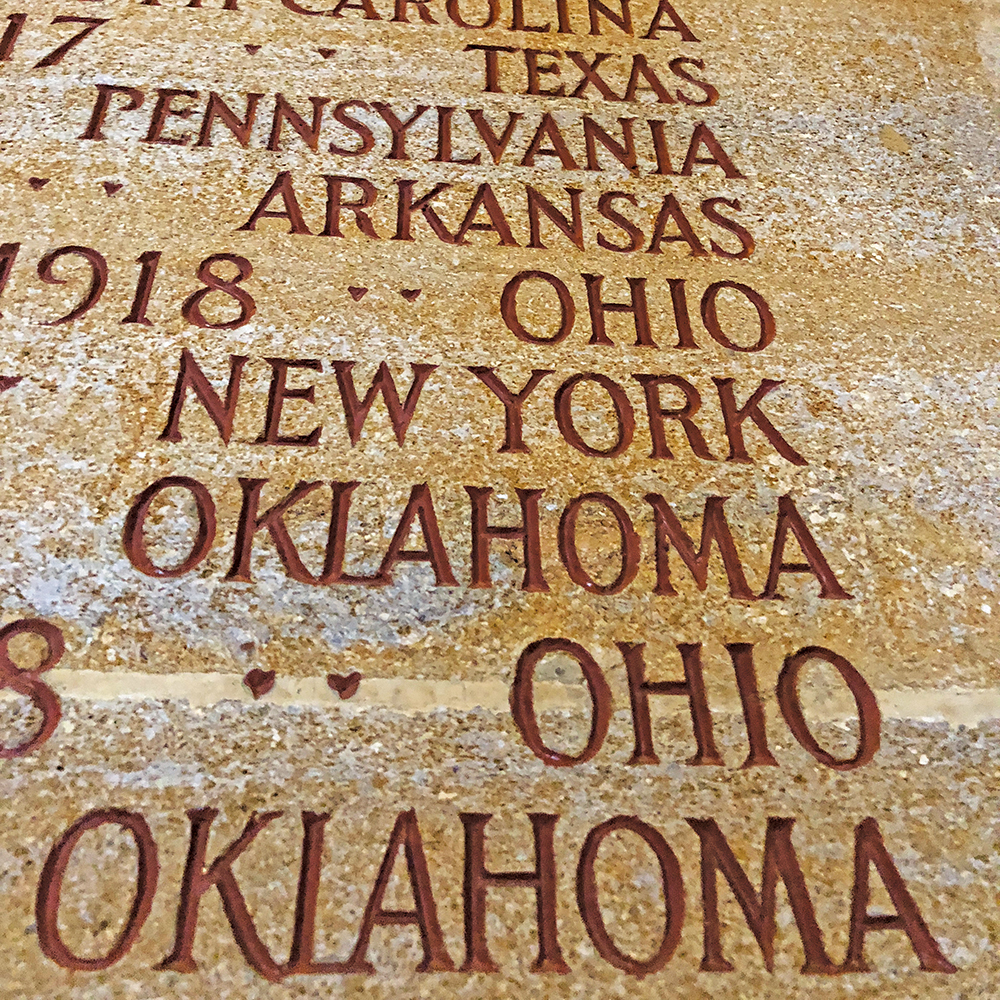 All three were aboard the HMS Otranto the morning of Oct. 6, 1918. The ship was transporting 372 British officers and sailors and 701 American soldiers from New York to ports in Great Britain. A ferocious storm enveloped them in the north Atlantic off Scotland, powered by 60-foot waves and hurricane-force winds, and the Otranto was rammed by another ship in its convoy.

In the mayhem, 470 men – 316 of them Americans – died. Their bodies were buried at first at Kilchoma on the Scottish island of Islay, and later moved to Brookwood by the American Battlefields Monuments Commission.

Two Oklahomans in the U.S. Army 34th Division died in Liverpool within five days of each other, claimed by pneumonia brought on by the deadly 1918 flu epidemic. Loranzy P. Cope of Foss, assigned to the 126th Machine Gun Battalion, and Isaac Washington Waller – a member of the 133rd Infantry Regiment who was one of 10 children of Francis and Alfred Franklin Waller, raised near Stonewall – were buried first at the Everton Cemetery in Liverpool before joining their fellow soldiers in Brookwood.

Six other Oklahoma veterans are memorialized inside the cemetery chapel. The inner walls of the sanctuary, illuminated by 17 stained glass windows emblazoned with the names of each of the 48 states at the time, feature the names of those lost inscribed on the Tablets of the Missing.

Among them: Oklahoma enlistees George C. Perry of Lone Wolf ; William G. Smith, originally of Festus, Missouri.; and James R. Patillo of the 20th Engineer Regiment. All three U.S. Army privates were on the steamship Tuscania, which was carrying 2,397 U.S. soldiers to the front near Le Havre when it was slammed by a torpedo from the German submarine U-77 on Feb. 5, 1918. The trio was among 210 Americans lost to the sea eight miles off the coast of Ireland; their bodies were never recovered.

– Virgil Edgar Harrington, Seaman Second Class of the U.S. Navy, who enlisted March 29, 1917, in Oklahoma City. He was lost at sea on Nov. 5, 1917, aboard the USS Alcedo, the first American vessel lost in World War I, torpedoed by German submarine UC-71 off the coast of France.

– Seaman Milton Ellsworth Hobbs, lost April 11, 1918, when the USS Lakemoor was torpedoed by the German submarine UB-64 in the Irish Sea.

– Seaman Jesse Clifford Sampson of Fletcher, who enlisted in Oklahoma City on April 24, 1917, and served aboard the armed frigate S.S. Tyler as an Armed Guard sailor. On May 2, 1918, on its way from Genoa to New York, the ship was sunk by UB-48 in the Mediterranean, with the loss of Sampson and 10 of his shipmates.

As I wander the grounds, Gail Anderson emerges from her office at the cemetery visitor’s center. She invites me in to see original ledger books chronicling each burial, and notes that Michael Zuerlein of the Otranto was initially one of the unknown American soldiers; the pull of the waves had stripped his dog tags away. His name was learned only after his family wrote letters to the recovery effort in Islay, offering details that helped solve the mystery of his identity. She is pleased when I tell her that American Legion Post #80 was dedicated in his honor in 1919, on the one-year anniversary of his death, and still carries his name. 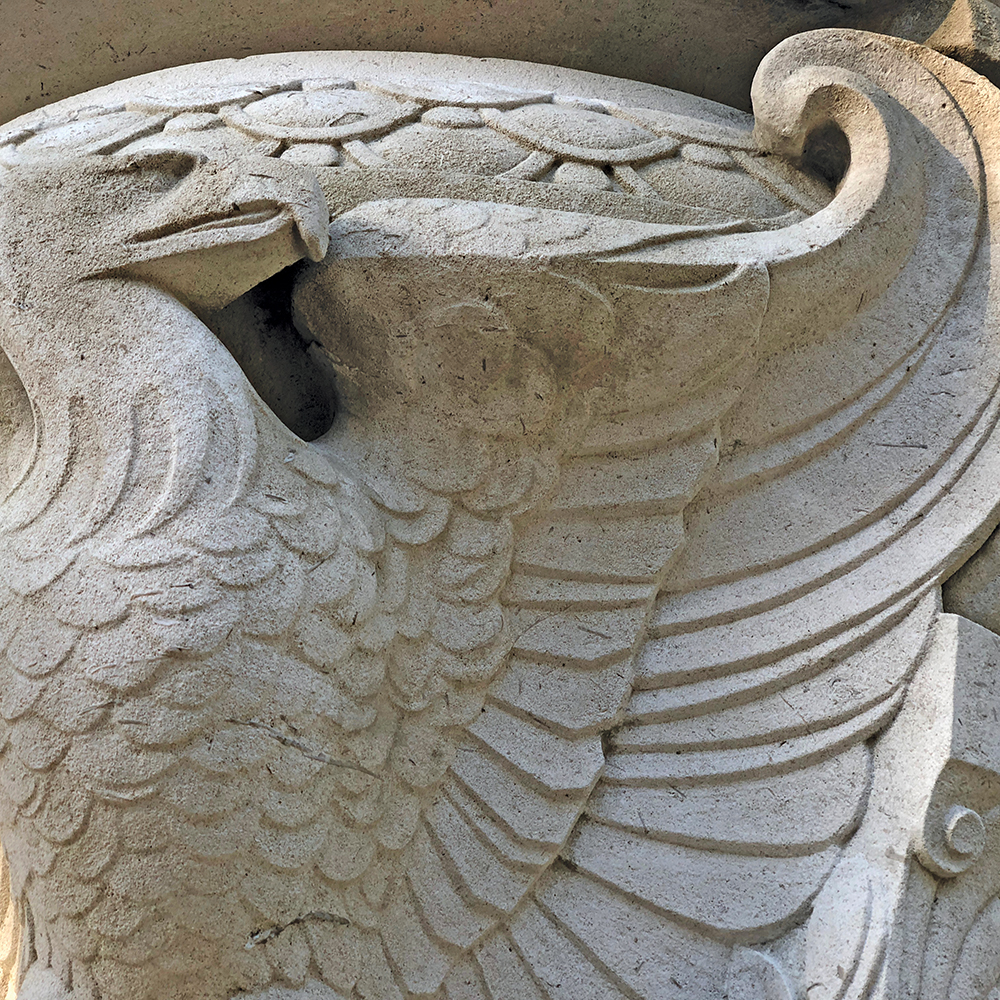 She noted that few family members came to visit the graves, although pilgrimages were arranged for Gold Star families in the 1930s. A century later, visitors are more interested in the overall history rather than in the individual soldiers buried there.

A U.S. flag flies in the center of the graves, atop a cast-bronze flagpole base identical to the one at Belgium’s Flanders Field American Cemetery.

The view to the north faces an inscription above the chapel’s entrance, its five words glowing in the winter sun: “PERPETUAL LIGHT UPON THEM SHINES.”

The train back to London rumbles in the distance, and I backtrack down the icy path to return to the empty platform.

The doors open. No one disembarks.

Brookwood is the final resting place to a quarter million people. Among the 5,000 British Empire soldiers of World Wars I and II, the paupers’ graves and a memorial to King Edward the Martyr, the cemetery contains the remains of painter John Singer Sargent, author Rebecca West and the infamous Sir Cosmo Duff-Gordon, long-reviled survivor of the RMS Titanic who lived with accusations of cowardice from the day he climbed aboard a lifeboat and deserted the doomed ship. He noted before his death, 18 years later, from natural causes: “The whole pleasure of having been saved is quite spoilt by the venomous attacks.”

UNITED STATES IN WORLD WAR I