Oklahomyths: Gumming up the Truth - 405 Magazine 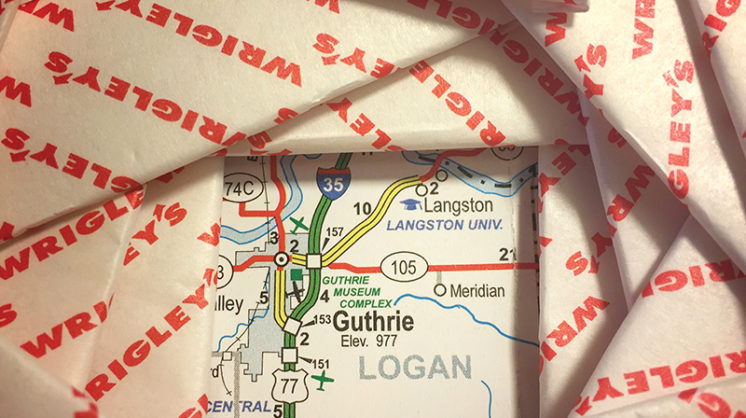 THE CLAIM: William Wrigley produced his first chewing gum at his office on North Division Street in Guthrie.

THE SOURCE: Oklahoma: The Land and Its People, By Kenny A. Franks and Paul F. Lambert (1994)

FACT CHECK: It’s a story that has clearly stuck in some people’s minds, as it’s survived for more than a century: Wrigley’s gum was invented in Oklahoma Territory, not long after the ’89 land run.

The claim probably started with Fred Wenner, a Territory-era correspondent and Guthrie Chamber of Commerce booster, who noted: “A young boy working in Kimball’s Grocery Store conceived the idea of cutting beeswax in strips, rolling these strips in sugar and flavoring them with any flavor the grocer carried. Those sold beyond his expectations. This boy was William Wrigley. Later he put the jaws of the world to work on his ‘Wrigley’s Chewing Gum.’”

In reality, the Philadelphia-born Wrigley moved to Chicago in 1891, at the age of 29, and worked as a salesman. He quickly discovered that the sticks of gum he gave as gifts to customers caused more excitement than the merchandise itself, so he decided to create his own brand of gum instead. After early success with Sweet Sixteen Orange and Lotta Gum, he introduced his Wrigley’s Spearmint and Juicy Fruit lines in 1893, producing them at the Zeno company in Chicago.

Wrigley executive Denise Young debunked the fanciful link to Oklahoma history in a letter published by The Oklahoman on June 17, 2003:

“I have checked with our corporate archivist who tells me that the town of Guthrie, Oklahoma, lists a fact like this. However, over the years, she has corresponded with a few Oklahomans about this matter, and has told them that William Wrigley Jr. may have visited Oklahoma in his travels as a chewing gum salesman, but we have no record of him making his first chewing gum there.”

This should be a lesson to us all not to swallow every piece of trivia we come across; they can stay in our systems longer than we might think.