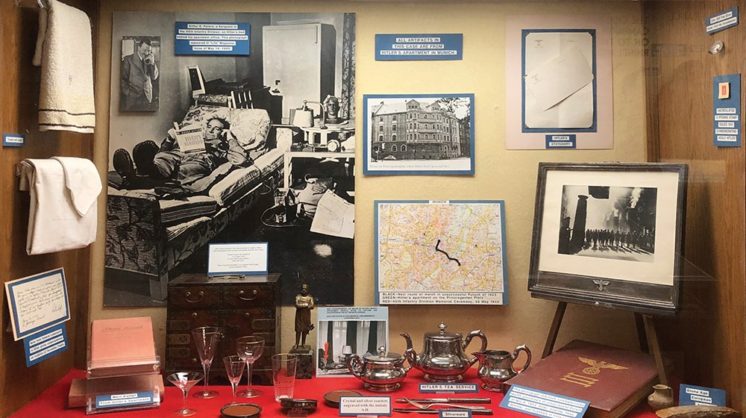 He was born in the spring of 1889, just hours before cannons and gunshots announced the start of the Oklahoma Land Run half a world away. Like many European schoolboys at the turn of the century, he played cops-and-robbers and cowboys-and-Indians. He enjoyed tales of exploration and war but was drawn, most of all, to a series of books set in the American West. Night after night, the boy read by candlelight of the adventures of a mighty Apache chief named Winnetou and his trusty German blood-brother, Old Shatterhand.

The books’ lessons stuck with him. Decades later, he said of their author: “I owe him my first notions of geography, and the fact that he opened my eyes on the world.”

The author was Karl May. The boy was Adolf Hitler.

May never set foot on the American frontier, but told everyone he had, eventually taking to wearing buckskin and a bear-tooth necklace. A schoolteacher born in Saxony in 1842 who spent much of his 20s imprisoned for theft and fraud, May (pronounced my) used his time behind bars to read accounts of faraway frontiers and the vanishing tribes of America.

His spun first-person narratives of Winnetou and Old Shatterhand who righted wrongs by wit and cunning and derring-do. Although virtually unknown in the United States, most of his 82 titles – including stories set in the Orient, the Middle East and fantasy lands – are still in print, and have sold an estimated 200 million copies over the past 150 years.

Hitler gave May’s works as gifts and used quotes from the books in speeches, borrowing phrases like “muscles of iron and sinews of steel” to describe his ideal German soldier. Despite wartime paper shortages, he shipped a reported 300,000 of the novels to boost morale on the front, referring to the mythical Winnetou as an inspiring leader.

Biographer Ian Kershaw noted that Hitler’s boyhood “fascination with Karl May never faded. As Reich Chancellor he still read the May stories, recommending them, too, to his generals, whom he accused of lacking imagination.” 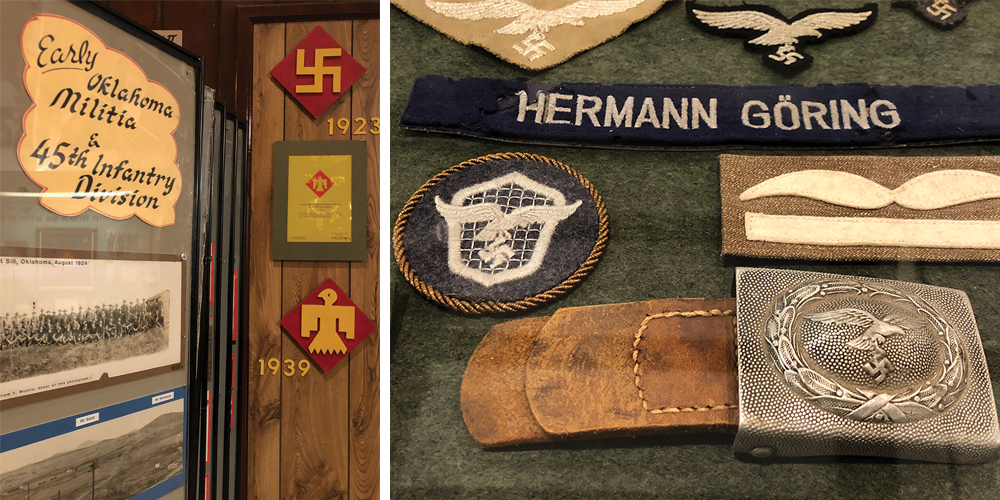 “Any account of Hitler as commander of troops should not omit references to Karl May,” wrote Albert Speer, Hitler’s Minister of Armaments and War Production, in his reminiscences after the Nuremberg trials, from his cell in Spandau prison. “Hitler would lean on Karl May for everything imaginable … when faced by seemingly hopeless situations, he would still reach for those stories, that they gave him courage like works of philosophy for others or the Bible for elderly people.”

The appeal of May’s fictional Apache chief carried over into the 21st century. The newsmagazine Der Spiegel notes: “Winnetou is the quintessential German national hero, a paragon of virtue, a nature freak, a romantic, a pacifist at heart, but in a world at war he is the best warrior, alert, strong, sure."

Although Hitler dismissed non-Europeans as inferior to his Teutonic ideal, author Klaus Fischer noted the repulsion was mixed with an appreciation of Native Americans’ noble spirit and their “tribal solidarity, warlike nature and bravery in battle,” undeterred even when facing overwhelming odds.

He considered American tribes a romantic but nearly extinct vestige of the past. In 1942, when discussing rising resistance in the East, he noted, “The struggle we are waging there against the Partisans resembles very much the struggle in North America against the Red Indians.” His prediction of the outcome: “Victory will go to the strong.”

And so it would come to pass. Hitler’s nightmarish reign, which had caused the death of millions and threatened millions more, could only be challenged through a force of strength and resolve. The fighters came from the west, like the heroes of his childhood books. Among the millions of U.S. troops who crossed the sea to battle the Axis powers were men from the newest American states. Soldiers from Oklahoma, New Mexico and Arizona joined with troops from Colorado to form the National Guard’s 45th Infantry Division.

In a twist worthy of a Western pulp novel, the 45th’s original emblem was the swastika, a universal good luck symbol that had spanned ancient cultures. After it was defiled by the Nazi cause, the men of the 45th adopted a different talismanic symbol: the powerful and equally ancient Thunderbird.

The new design was created by Kiowa artist Woody Big Bow. He depicted the Thunderbird in gold within a red diamond, representing the four states from which the original troops were drawn.

And so it happened that 75 summers ago, in June 1943, the Thunderbirds embarked on an odyssey that would lead to Hitler’s downfall. Marching under the Stars and Stripes and spurred on by the motto “Semper Anticus” – Always Forward – the Thunderbirds fought for two years, seeing 511 days of combat.

They launched from North Africa to battle their way from behind German lines. They landed in Sicily as part of Operation Husky and fought ferociously at Anzio. They advanced to Rome, and were the first to reach the Vatican. They marched through France and Germany. They captured Nuremberg and Munich and joined with the 42nd Infantry and the 20th Armored Division to liberate the concentration camp of Dachau.

The Nazi forces were in retreat, suffering defeat after defeat. Hitler spent the early months of 1945 in his air-raid complex beneath the Reich Chancellery, bringing in his closest confidants and little luxuries, including a library of works by his favorite authors. He last saw daylight on April 20, his 56th birthday, emerging briefly before retreating back into the bowels of his bunker.

Ten days later, with Soviet troops closing in, he gave his new wife a cyanide capsule and took one himself before firing a bullet into his head. Germany surrendered on May 7. One hundred days later, on Aug. 15, Japan conceded defeat, bringing a close to World War II. 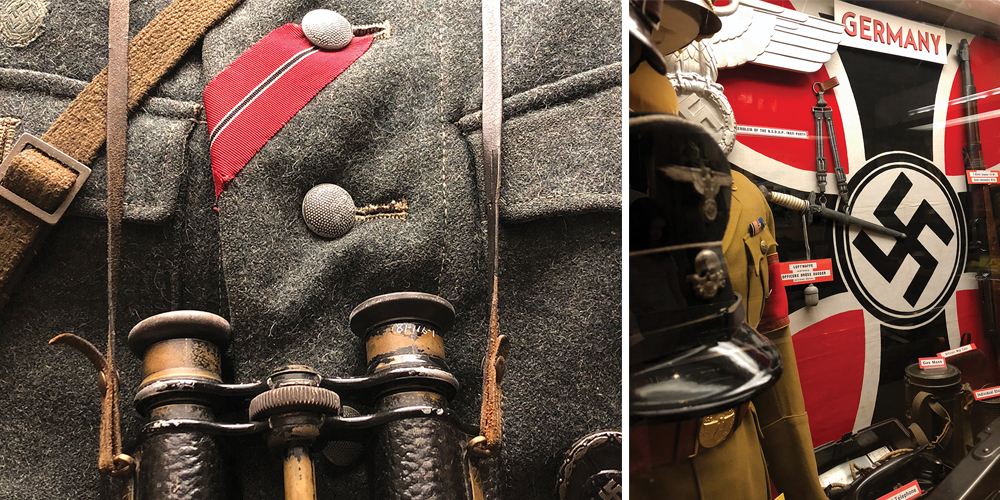 Gen. George Patton said of the 45th: “Your division is one of the best, if not the best division in the history of American armies.”

The 45th put their lives on the line with the Thunderbird on their sleeves. Historian Alex Kershaw said the symbol was especially meaningful to the Indian soldiers: “In their eyes, it was an avenging spirt, dealing death and destruction to evil-doers. But it was also a source of hope, a harbinger of victory, for those who were able and deserving.”

As Hitler predicted, victory went to the strong. And the Thunderbirds returned to the American West, powered by muscles of iron and sinews of steel. 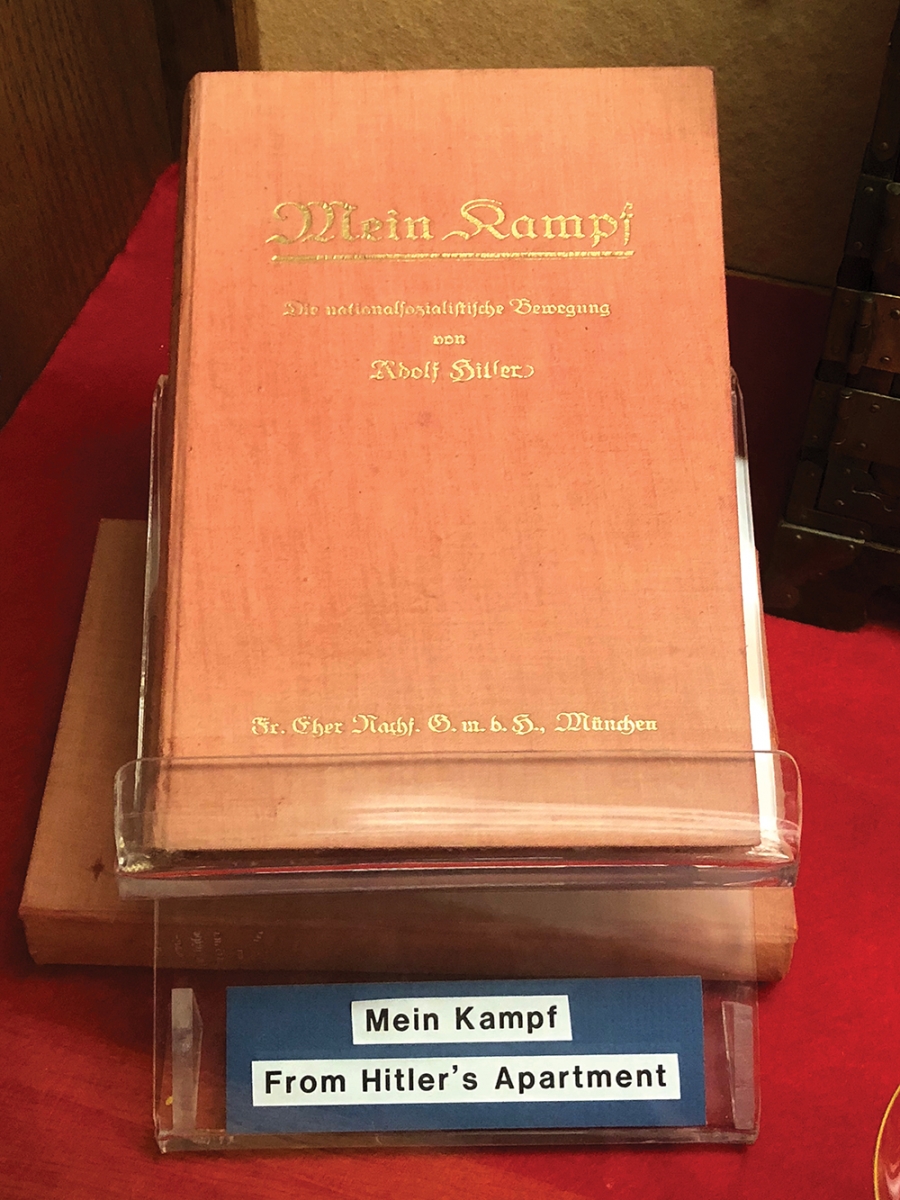 August marks the 73rd anniversary of the end of World War II. Evidence of the Allies’ triumph, the toll it took and the contributions made by Oklahomans is enshrined in the 45th Infantry Division Museum in Oklahoma City, in a stained-glass window in Tulsa, and at the U.S. Holocaust Memorial Museum in Washington, D.C.

At the 45th Museum, every artifact has a story — of the war, of its recovery, of its journey from Europe, of the years spent under fluorescent lights in a former armory on the Great Plains. The tailored uniforms and Nazi armbands, dimly glowing guns and medals, SS rings and skull pins and items from Dachau stand silent testament to the deeds they have witnessed.

The World War II displays include fine linen: an enormous tablecloth, terrycloth towels, elegant pillowcases and linen napkins, each painstakingly embroidered with designs of intertwined eagles and A.H. monograms. There is crystal stemware. A silver tea set. Two knives and a fork are engraved with Hitler’s crests and initials.

The luxury items were part of the Nazi propaganda effort to project an atmosphere of power, much like the films of Leni Riefenstahl and the neo-classical architecture of Albert Speer.

Among the items on display in Oklahoma City are Hitler’s personal copy of Mein Kampf, along with a wooden chest where he kept foreign translations of his book. Also featured: a large Life magazine photograph of Sgt. Arthur Peters of the 45th lounging in Hitler’s bed in his Munich apartment, paging through the book. 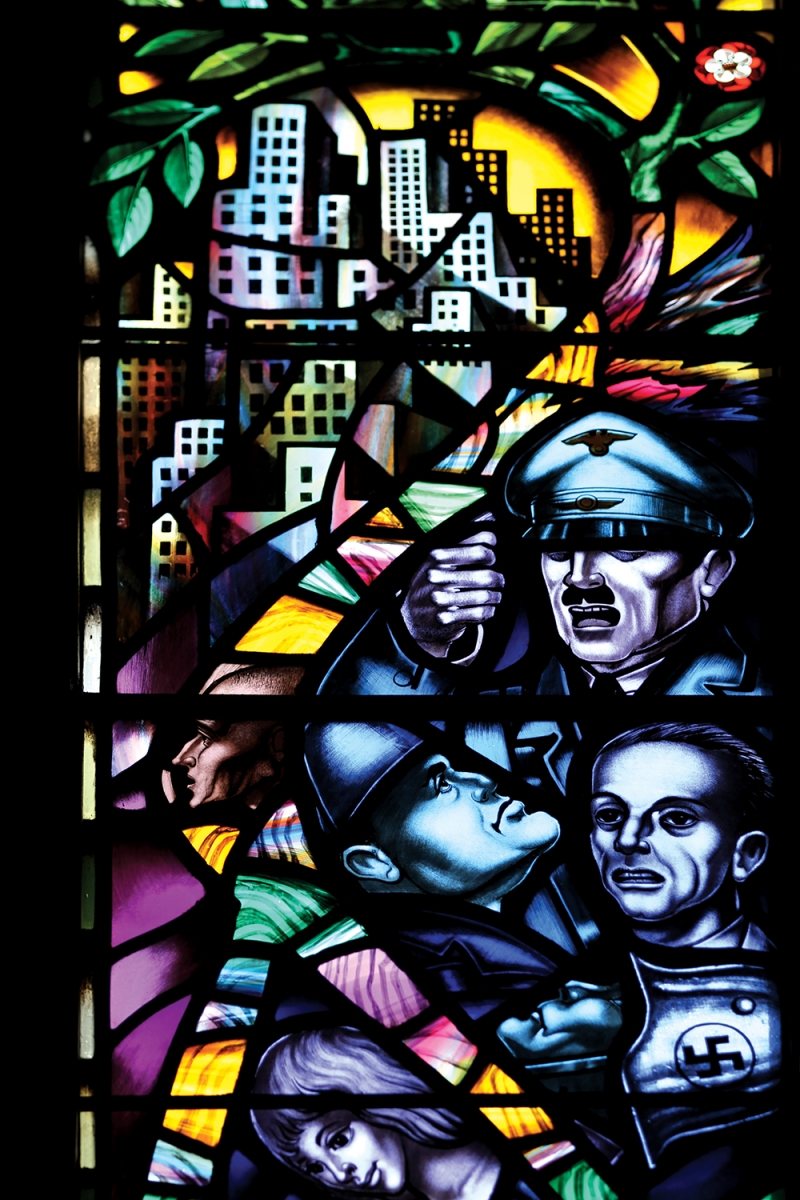 Hitler Stained-Glass Window, Tulsa
The Resurrection Window installed near the organ loft of Tulsa’s Trinity Episcopal Church includes likenesses of the architects of World War II – Mussolini, Hitler, Goering and Goebbels – beneath a stylized skyline of 1960s Tulsa, suspended in a stained-glass depiction of hell in its panel of saints and sinners. The window was commissioned 50 years ago from Frederick Cole of Canterbury, England, a survivor of the London Blitz. Trinity historian Martha Cole noted the artist wanted to “ensure that people never forgot the horror (that) men have visited upon their fellow man.” 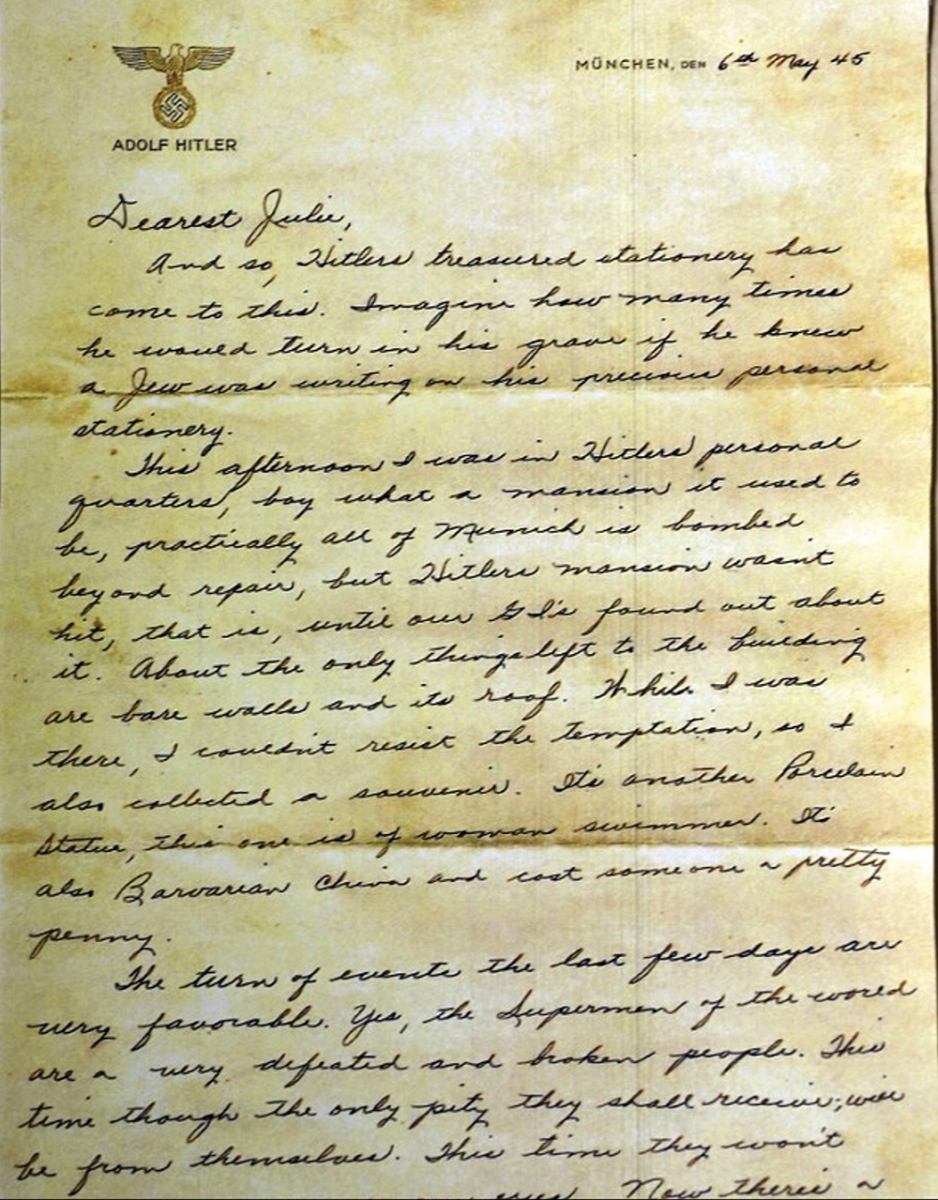 er’s Stationery, Washington, D.C.
Six days after Hitler committed suicide, Muskogee-born Danny Jacobson, a 26-year-old sergeant with the 45th Division’s 179th Infantry, helped himself to stationery from Hitler’s Munich apartment to pen a four-page letter to his wife in Oklahoma. It begins: “Dearest Julia, And so, Hitler’s treasured stationery has come to this. Imagine how many times he would turn in his grave if he knew a Jew was writing on his precious personal stationery …” In 2015, at the age of 95, he donated the letter to the U.S. Holocaust Museum, where it rests as part of its permanent archives. 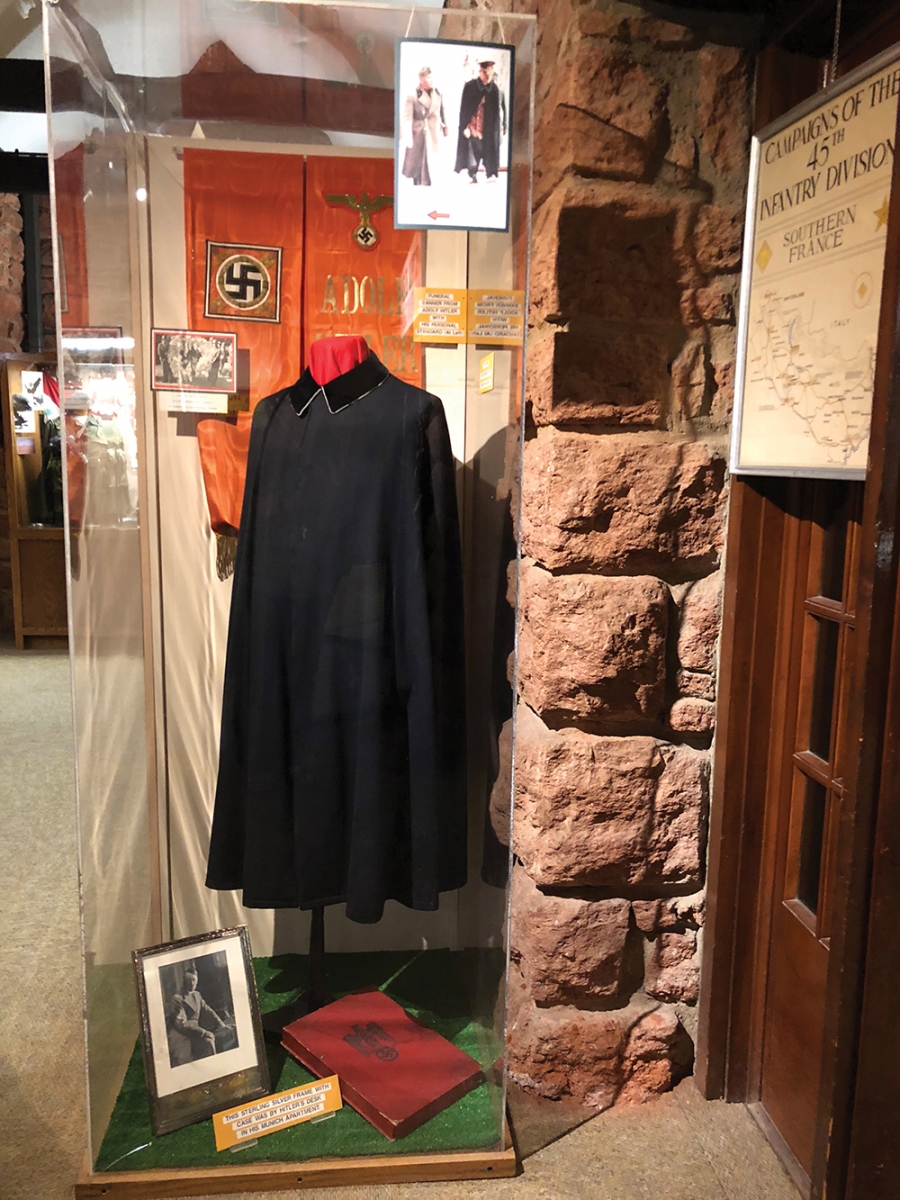 Hitler’s Cloak
The black wool cloak with the velvet collar came to Oklahoma in a wooden ammunition crate, bundled with other clothing taken from the closet Hitler’s luxurious nine-room apartment on the second floor of Prinzregentenplatz 16, Munich. The garments were used as packing materials to safeguard a box filled with monogrammed Hitler silverware shipped back home by a solider of the 45th. Curator Mike Gonzales, a former platoon leader who has been with the 45th Division Museum for more than 30 years, said the clothes were thrown away — except for the cloak, which the solder’s wife took a liking to. She trimmed it from the bottom, to suit her petite frame, and wore it around Oklahoma City for several winters. With the opening of the 45th Division Museum, her husband asked if he might have the cloak back, to donate for display. When she asked why anyone would care about an old cape, he finally mentioned the name of its original owner to his stunned wife. It is now exhibited under glass, with a photograph of Hitler wearing the garment. 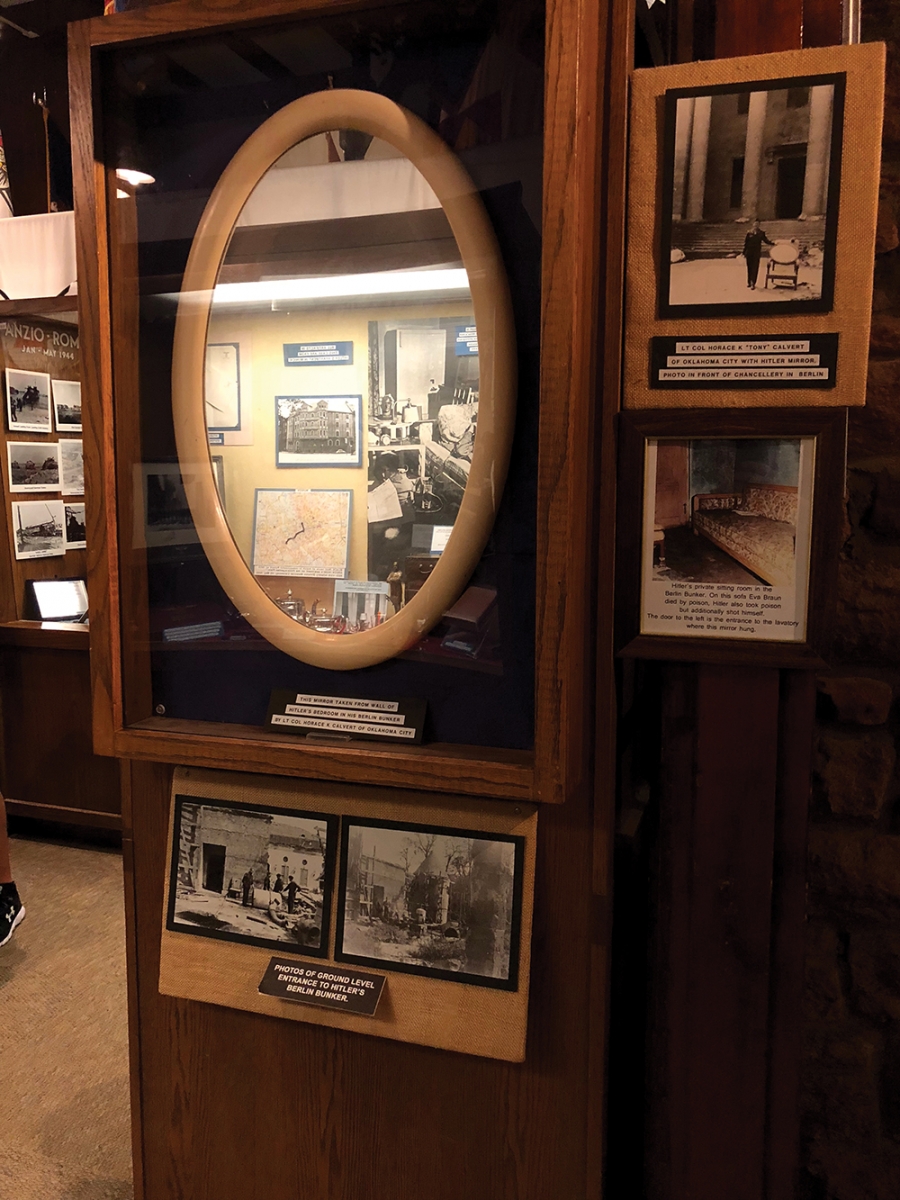 Hitler’s Mirror
The large oval mirror in which Hitler looked into his own eyes for the last time was one of the few items remaining in the ransacked Führerbunker after it was stormed by Russia’s Red Army. The first American allowed in was Nowata-born Horace Kellogg “Tony" Calvert, the grandson of ’89 Land Run pioneers, who became one of the original members of the Office of Strategic Services (issued Badge Number 10). Calvert took the mirror from the bunker wall, along with a smaller one belonging to Braun, and posed for a photograph with the items in front of the Reich Chancellery. The larger mirror is surrounded by a cream wooden frame and now encased under glass. From a certain angle, it reflects the Osage battle shield — crossed by the peace pipe and olive branch — of the Oklahoma state flag in the rafters above.