On Location: Robison and Twenter - 405 Magazine 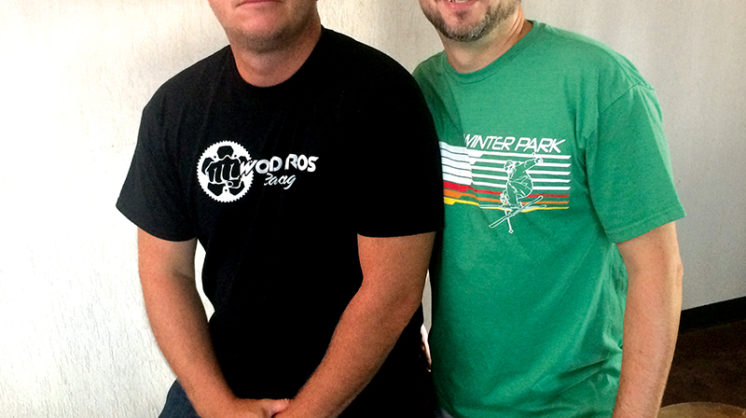 Jeff Robison and Casey Twenter are two of the most successful filmmakers working in Oklahoma. Their film Rudderless premiered closing night at Sundance in 2014. Their adaptation of the book The Scent of Rain and Lightning attracted two of the hottest young actresses in Hollywood. And their latest effort, a comedy series called “In the Rough,” is being funded and distributed by new digital power player Verizon Hearst Media Partners.

With all of these great projects, it’s easy to think that they enjoyed a smooth, linear path toward success. The reality is far more inspiring.

“After Rudderless, everyone said, ‘You are going to be the next big thing. You’re at Sundance!’” Twenter recalls. “So we got managers, we waited, we played all of the games: writing, pitching, waiting. Finally we said, ‘Forget it. We are not going to wait on other people.’ That’s a mistake a lot of people make. You make your own luck. Jeff and I have a career because we did it ourselves.”

Robison and Twenter did not start off as writing partners. Robison had written a script and was having a hard time getting honest feedback from friends who were just excited he wrote a screenplay. “Casey was the first to ask about the process. ‘Why did you write this? How did you do that?’” Robison continues. “It became an organic collaboration. We did not set out to be partners, it just happened.”

To date, the duo have written and produced four major projects in Oklahoma, and there are more in the pipeline. Their first big attempt was Rudderless. But after funding fell through on that project for the second time, they moved their efforts to The Jogger, a lower-budget thriller they decided to co-direct. Eventually, funding for Rudderless came through, William H.

Macy signed on to direct and an all-star cast – including Billy Crudup, Selena Gomez and the late Anton Yelchin – brought the film to life. Their next film, The Scent of Rain & Lightning, attracted another high-end cast, landing Maggie Grace from TV’s “Lost” and Taken and Maika Monroe from the Sundance smash It Follows.

“In the Rough,” a ribald golf comedy, is their fourth major project. It is based on the first script Robison ever wrote. “Jason Wiles, who co-starred in our first film, The Jogger, got us the invite. We pitched 10 ideas to Verizon, they liked it, so we took elements of the scripts we already had and pounded out 250 pages in two weeks. Then we cut the script down from 250 to 180 pages for the series.” The series will ultimately include eight 22-minute episodes.

The differences between writing a movie and writing a series are major, according to Twenter: “Television and web series are about characters. Storyline is second in television. In a movie, it’s story, story, story. Characters are developed within the path of the story. In a series, you can do things strictly for laughs or character development.”

The writing is different, but the production process is basically the same. Eighty percent of the Oklahoma-based crew on “In the Rough” has worked on the duo’s previous projects. “There is no artistic medium more collaborative than film,” Robison says. “When you work with people [who] you get along with, that see the vision you see, you want to keep working with them.”

That is great news for Oklahoma. And their partnership seems to get stronger with each project. “The ego part has been tough, learning to give,” Robison notes. “But we learned that when we disagree, we just need to listen.” Twenter agrees, “We had a lot of petty arguments the first three to four years. As we got tighter, we reached a perfect balance.”

It is great to meet people with so much talent – but it’s even more inspiring to know how hard they have worked to get every single project off the ground. Robison and Twenter have maintained relationships, leveraged their connections and researched new distribution models to forge their own path as storytellers in the continually evolving cinematic landscape.