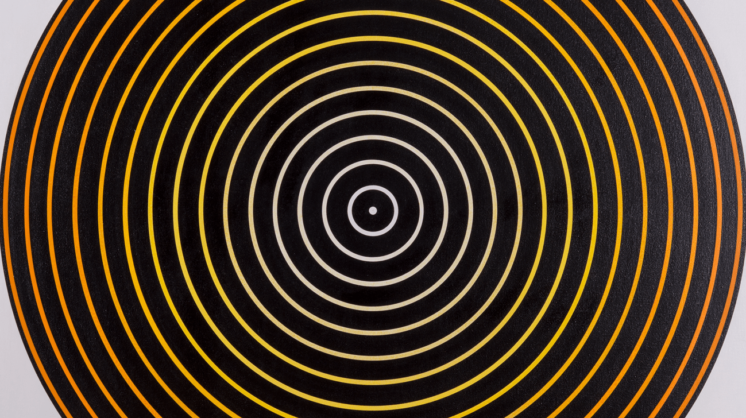 Any art can move its viewers, but rarely is motion so manifest in the pieces themselves. Moving Visions: Op and Kinetic Art of the Sixties and Seventies, a new exhibit opening in February at the Oklahoma City Museum of Art, 415 Couch Drive, delivers real action and remarkable simulations. Moving Vision is powered by some of OKCMOA’s most treasured pieces from its permanent collection, as well as loans from private collections, showcasing art that incorporates illusion, tricks of light and sculpture that does not simply stand there.

Roja Najafi, guest curator from Chandler-Gilbert College near Phoenix, Arizona, said that while Moving Vision focuses primarily on the work of artists in the 1960s and 1970s who benefited from the availability of plastics, the foundation was laid much earlier. Marcel Duchamp, the French-American Dadaist and Cubist whose “Nude Descending a Staircase” was an early and provocative example of optical or “op” art, also played a crucial role in kinetic art through later works including “The Large Glass” and 1935’s “Rotorelief.”

“Kinetic art has its roots in the explorations of Duchamp,” Najafi says. “So – like most other things, probably, in 20th century art – this work starts with Duchamp.”

Duchamp’s rejection of artistic norms greased the skids for the work of 20th century art innovators such as mobilist Alexander Calder and Fletcher Benton, whose 1984 sculpture “Folded Circle Split” is a recent op art acquisition by the museum. In addition, Duchamp’s series of swirling discs were clear influences on Tadasky (Tadusuke Kuwayama)’s 1965 acrylic “C-182” as well as Sue Fuller’s “String Composition #366” from the following year.

Najafi said that one of the key non-artistic influences for the art included in Moving Vision came before Duchamp broke down the stolid demarcations between art and design. The industrial revolution of the 19th century, with its spinning wheels and gears, helped art move beyond static displays and embrace kineticism.

“It is connected to industrialization, all of the speed of life that suddenly began from the middle of 19th century – especially, if you think of it concentrated from the middle of 19th century, all the way to futurism,” Najafi says. “If you concentrate on that, it’s definitely connected to the Industrial Revolution, industrialization and motorization.”

In curating Moving Vision, Najafi looked to landmark exhibitions that explored op and kinetic art and fostered a greater understanding and appreciation of art that works in collaboration with the eye of the beholder. One such showing was The Responsive Eye, an exhibition that was displayed in early 1965 at New York’s Museum of Modern Art (MoMA). Curated by William Seitz, whose scholarship on abstract expressionism helped advance the study of living artists, The Responsive Eye still is recognized as one of the most popular exhibits MoMA has staged in its history.

Upon the opening of The Responsive Eye, Seitz offered an incisive definition of both op and kinetic art.

“Unlike most previous abstract painting, these works exist less as objects to be examined than as generators of perceptual responses, of colors and relationships existing solely in vision; of forms, presences and variations often entirely different from the static stimuli by the artist,” Seitz wrote. “Such subjective experiences, brought about by simultaneous contrast, afterimages, illusions and other optical devices are entirely real to the eye, although each observer will respond to them somewhat differently. The responses are by no means merely retinal, and they vary widely from optical tensions and fusions of color or tone to sonorous interactions between hues of the spectrum, retroactive effects of flatness, advance and recession, and arrangements of shapes, lines and patterns that exert a control over perception capable of arousing delight, anxiety and even vertigo.”

Acceptance of such work as fine art, including Calder’s mobiles, was long in coming, and Seitz fought for the expansion of art’s definition throughout his career. For her part, Najafi is continuing that tradition through her curation of Moving Vision.

“You see the snobbiness of art critics and art historians, that ‘all this is just visual, this is just motif, this is just pattern, this is fashion,’ because immediately fashion responded to these amazing works,” she says.

To help maintain social distancing during Moving Visions, OKCMOA is offering scheduled entries for patrons to see these works, and reservations will be available Feb. 21 through May 16 at okcmoa.com. Because of the nature of the exhibition, Najafi said it will be most valuable and understandable for those who witness these works to do so in person.

“At the end of the day, I want to say just come and enjoy, because these works will capture you,” she says. “There are no figures, right? There are no bodies in this. You are the figure in this exhibition, you are the body.”

“Moving Vision” will be open to the public from Feb. 20 to May 16 with timed ticketing and limited capacity to remain socially distanced. For more information about the upcoming collection, please visit the OKCMOA website.