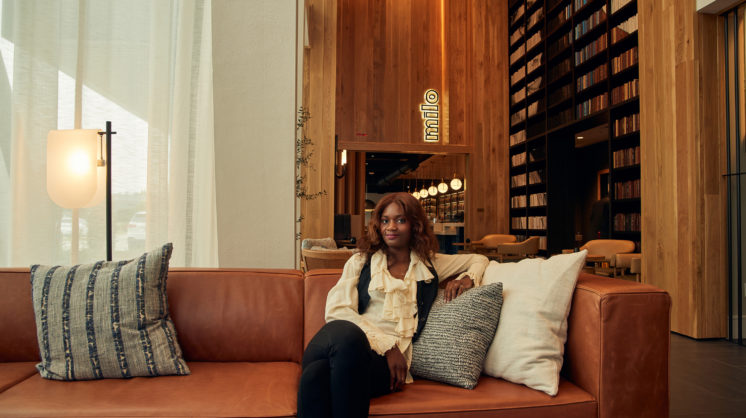 Alaina Hunt was already on the Cooper House branding team for The Ellison Hotel when she landed “The Reader” — an easily recognizable art installation on the first floor of Oklahoma City’s newest boutique hotel.

The Ellison’s interior designers had three criteria in mind: a local piece of art, an impactful piece of art and a bookshelf. “Oklahoma City is becoming known for its murals, right?” Hunt suggested. “What if we did a bookshelf mural?”

Cooper House founders Tim and Erin Cooper, also artists, both recognized the idea’s profundity and realized the value in giving Hunt the opportunity to execute it.

Hunt, a graduate of the University of Oklahoma’s Studio Art program and designer at Cooper House, got to work. She drafted her ideas, gathered a team of people and ordered a few thousand books to create the foundation for her vision of this one impactful mural: E pluribus unum. Out of many, one.

While the colors were chosen with purpose and the installation overall is not without great meaning, only two of the 2,970 books that make up this creation aren’t random. “It would’ve been cool if we were able to choose them all, but there were just so many,” explained Hunt.

What were those intentionally selected books? The first title chosen was The Old Man and the Sea, a nod to a coworker who was a pivotal part of The Ellison’s branding process before passing away earlier in 2022. The second was, of course, Invisible Man by Ralph Ellison, Oklahoma’s most celebrated author and namesake for the hotel itself.

Hunt will tell you that this was the pivotal moment in her success as an artist. As creatives tend to do — as humans tend to do — she spent too much time “shoulding” on herself before cultivating the type of courage that paved the path of authenticity and allowed her to really reach others.

When asked to elaborate, she smiled and held her chin a little higher. “I think that I was really just kind of trying to hide myself and make art a certain way, because I didn’t feel like what I wanted to do was relevant; but anything anyone wants to do is relevant. You just have to contextualize,” she said, mirroring the protagonist’s cognizance in Ellison’s Invisible Man.

“What and how much had I lost by trying to do only what was expected of me instead of what I myself had wished to do?”

Hunt’s unrelenting mission is artistic impact. She, like most creatives, chose art in order to connect — with herself, with others, with her work — and create a visual narrative of the world as she experiences it. “I really just strive to communicate and relate with people in unexpected ways, to engage people’s curiosity as much as possible.”

“The Reader” feels like opportunity. It feels like bravery, freedom, unity. It is a visual representation that out of many, oneness is possible.