Paradise in the Hall Garden - 405 Magazine 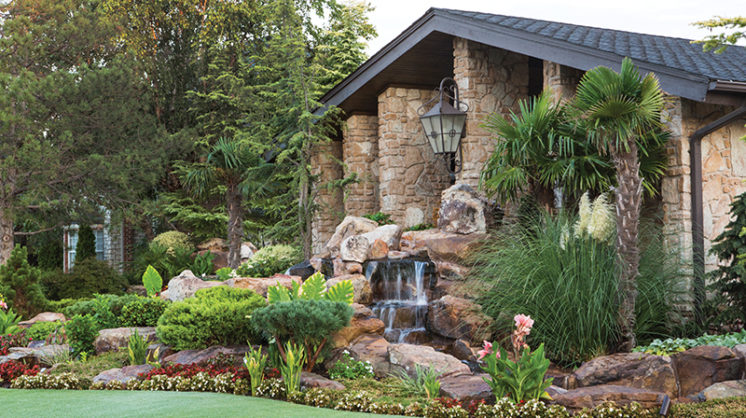 Any time a landscaping firm is contracted to create or renew a home’s yard, there’s a certain amount of dreaming involved, but David Hall’s particular vision might have been a little more in-depth — and difficult to achieve — than most.

“I told (landscaper/designer) Mike Lindsey that I didn’t just want a backyard,” David recalls, “I wanted a Southern California resort.”

Edmond homeowners David and Sheila Hall spend a lot of time in Palm Springs — in fact, they love it so much they even own a home there — and they wanted to translate that feeling to their Oklahoma digs as well.

It was a tall order for any landscaping firm, but Mike Lindsey felt that his company was more than up to the challenge.

“I have a certified landscape architect on staff,” Mike says, “And between the two of us we have over 70 years of experience doing this.”

The outdoor surfaces and yard of the ’70s-era home were gutted and the construction of the current paradise that surrounds the domicile took over a year … an extensive investment of time and money that David Hall says was worth the result.

“I spent more than I bargained for,” he admits, “But I got what I wanted.”

Evoking an image of a California resort wouldn’t be possible without palm trees, and while they’re not an Oklahoma staple, Mike Lindsey says that it’s possible to integrate them into a yard here.

“These are Mediterranean Fan Palms,” he says. “They’re a little more cold hardy than your average California palms, but someone using these in Oklahoma should be aware that every few years we do have a cold snap that can take them out … it’s not uncommon to have to replace them after one. But they’re reasonably priced; it’s not any more expensive than losing a sizable group of flowers.” 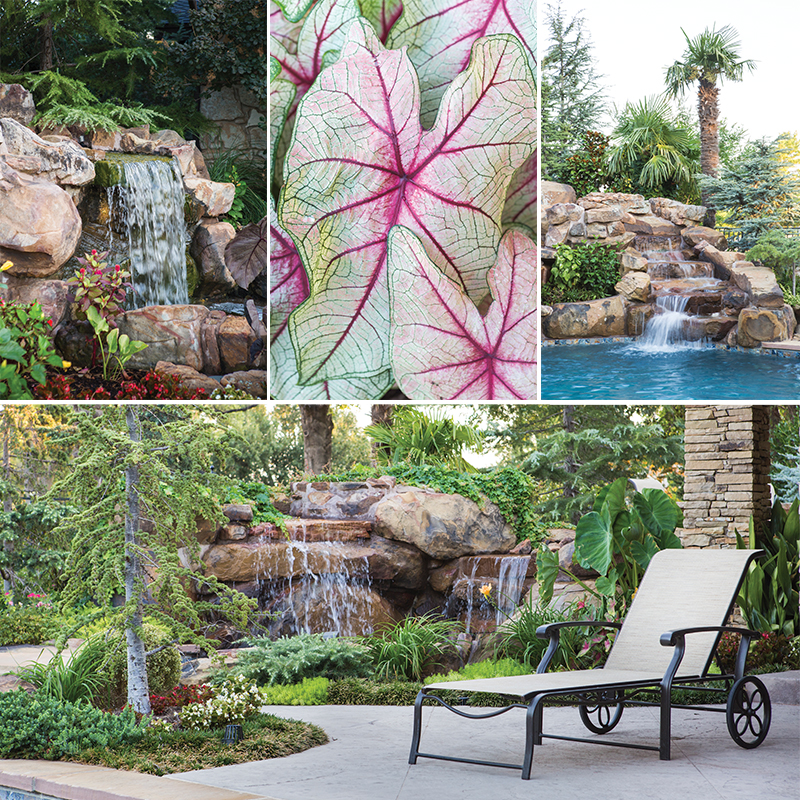 Another hallmark of this outdoor haven is its waterfalls. The front and back yard both have multiple water features and the rock-lined pool has three waterfalls filling it, adding both the feel of nature and the sound of it as well … not something you usually find in most constructed paradises, but an example of an element that can make all the difference in creating an atmosphere.

“I love the sound of running water,” Sheila says. “It was important to me that we incorporate that, and it adds so much.”

The cabana, outdoor kitchen and several fire bowls (as well as a stately rectangular fire pit) are also all examples of important components of the Halls’ retreat. When creating a place like this — more outdoor retreat than simple yard —Mike Lindsey stresses the importance of engaging professionals for guidance, even if you have a specific idea of what you want.

“We provide a very detailed service to our clients,” Mike explains. “We design the hardscape — the things like outdoor kitchens, pools — and then set up meetings with contractors we know and trust, or agree to interview companies that the client wants to use for those details, so that we can see if their skill level matches what we need to happen.”

“We also compose what we call an ‘A List,’ for the landscaping, either using the client’s preferences, or if they don’t have any, suggestions that we make, that they can then choose from, to use in the yard.” 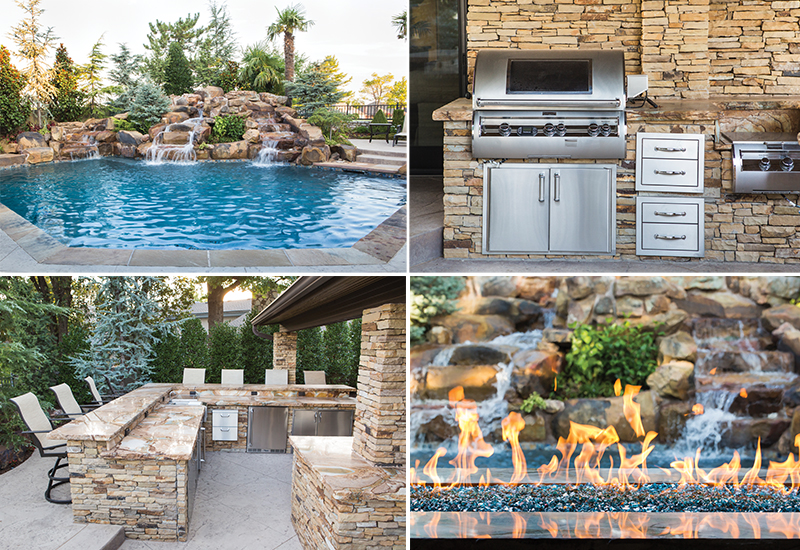 Mike says that visitors to Scapes, Inc. (his Mustang-based location for landscaping inventory) who are putting in their own yards or following a free plan often return … and need help in not only putting their initial plan into place, but repairing the attempt they made, themselves.

“You may think you’re saving money by trying it yourself or following a free plan,” Mike cautions, “But something on a scale like the Halls’ home really isn’t possible without a landscape architect. You do, in the end, get what you pay for. We’re reasonable in our pricing, but we are professionals, and in most cases, we’re necessary.”

The Halls’ landscaping earned them a spot on the Oklahoma Horticultural Society’s 2016 Garden Tour for Connoisseurs on October 1st (visit ok-hort.org for membership details, gardening info and watch for next year’s tour dates), but Sheila says that the most important recognition comes from a much smaller audience.

“My grandkids are out here every weekend that I’m in town,” Sheila says. “They love it, and so do we.”