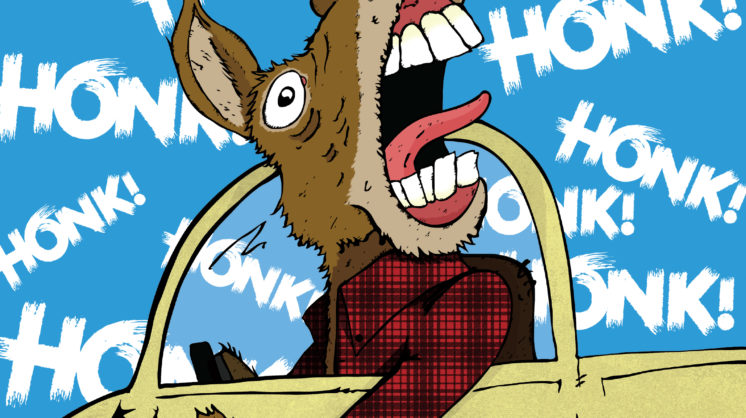 Finally, my most revered holiday has arrived: April Fools Day. I love that we have one day in 365 to play the fool, but lately, I fear this blessed day is becoming marginalized by an entire population who just can’t wait for April 1 to get their fool on.

“Fool” is a garden-variety term; the genus, if you will. You’re bound to encounter any number of species that you’ll want to strangle, or at least talk about at parties. To tell them apart, you’ll need this fool-proof (couldn’t resist) decoder that will identify them with a more specific label and description. With any luck – usually bad – you’ll spot each one before April 1 is done.

► ASS You’ll spot the Ass when s/he is riding yours in traffic. In oncoming traffic, you’ll spot the Ass by his or her high beams, which are always on because the Ass likes it that way. Sharing many traits with his or her close relatives, the Dumbass and the Jackass, the Ass can also be seen barreling down an ice-coated highway at 80 mph, or berating his or her children or spouse in public.

► BOOB The Boob has arrived late to the movie theater and must now bustle in, laden with popcorn, a gallon of soda and cellophane wrappers that s/he plans to wrestle with for the duration of the movie. No matter the availability of other seats in the theater, the Boob (and/or the Boob’s croupy offspring) will sit next to, or behind, you. Bank on it. The Boob, an Olympic-caliber ice chomper, insists on talking at full volume, but will become indignant upon being told that you came to hear the movie instead.

► BUFFOON The Buffoon struggles with math even more than a liberal arts major, an inconvenient shortcoming that reliably emerges when everyone else contributes a certain donation to the table’s lunch bill, the coworker’s baby shower gift or the office potluck.

► CLOD The Clod lives in your neighborhood and owns a large dog. The Clod faithfully walks the dog. (Good for you, Clod!) With equal predictability, the Clod’s dog adheres to a (daily) unburdening during his walk, for which the Clod is (daily) unprepared.

► CLOWN Not so much a comedian or merry maker, this Pagliacci is usually spotted multitasking, as in telling a story with an overstuffed mouthful of food, or talking while yawning, as if no one could wait another second to hear what the Clown has to say. Odds are, you’ve got a Clown in the family and, while your fervent prayer may be that he doesn’t revolt his audience in public, he does.

► JERK Ubiquitous to the office environment, the Jerk uses the last of the paper in the copier tray, pours himself or herself the last cup of coffee and leaves trash on the table and dirty dishes in the office kitchen for someone else to deal with. Toilet paper roll empty? Guess who!

► PINHEAD The Pinhead will walk through the door you’re holding open without a nod or a word of thanks. The Pinhead’s legions are strong in traffic, too. The Pinhead always expects to cut in front of you without making eye contact or waving to thank you.

► JUGHEAD Despite the name, this fool isn’t the good-humored nitwit you loved from Archie comics. The Jughead, whose domains are Internet comment sections, staff meetings and “reply all” emails, operates on an opinion-to-fact ratio of 99:1.

► CRETIN The crown jewel of fools, the Cretin has but one devotion, and that is to communicate digitally. And nowhere does the Cretin do it more prolifically than behind the wheel, spasmodically weaving through traffic with a laser-like focus … on his or her screen. With exceptional consistency, the Cretin will be the driver of the first car in the left turn lane, looking up just in time to clear the intersection, oblivious to the others left behind. Should karma intervene, may the Clod’s dog visit the Cretin’s yard soon.