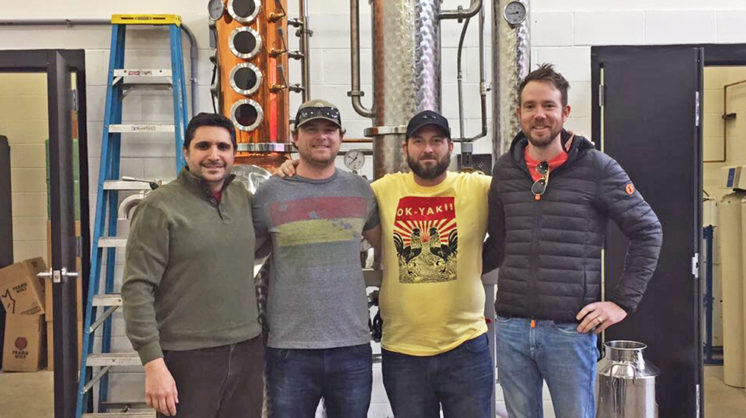 The ownership team behind St. Mark’s Chop Room in Nichols Hills has purchased Guthrie-based Prairie Wolf Distillery. Drew Tekell, one of the four operating partners, said the team has purchased the entire LLC, which means all current inventory has been sold as well. The sale was final on February 5.

Brothers Hunter and Blake Merritt, along with their families, launched the distillery – offering Prairie Wolf Vodka – in 2013. Since, they added Loyal Gin, M Whiskey and Dark, a coffee liqueur.

Hunter Merritt said the new ownership team, which also includes Dr. Steven Sands and Chef Jonathon Stranger, first approached them about opening a distillery, prompting a conversation between the brothers.

“We were at a point in the life of Prairie Wolf where we needed to make a decision,” he says. “Do we continue to grow, increase marketing, expand the brand? Blake and I have always owned apartments, and we decided that it was best to focus on one thing, and we chose real estate.”

Drew Tekell, whose brother Erik will be the head distiller, said the recipes will remain the same. “We bought Prairie Wolf because the products are already good,” he says. “And we’ll be remaining in Guthrie, even as we expand the brand nationally.”

Tekell moved back to his native Oklahoma from Seattle two years ago, and he plans on beginning the brand expansion in the Pacific Northwest, utilizing contacts he developed as a sommelier in Seattle.

“We’ll work with a distributor friend in Seattle to start,” Tekell says, “but we have a staged plan for every part of the country moving forward.”

In addition to broadening distribution, the team will release the first bottling of Prairie Wolf Rum in June. In keeping with the company’s local ethos, the sorghum for the mash (the mixture of grain and water that begins the process) will include Barking Water sorghum from the Seminole Nation in Wewoka.

The only immediate change to Prairie Wolf – other than ownership – will be new branding, which Tekell said he expects to roll out in April or May. “We want to emphasize that we think the Merritts have done an amazing job with their products, and we’re excited to continue what they started,” he says.