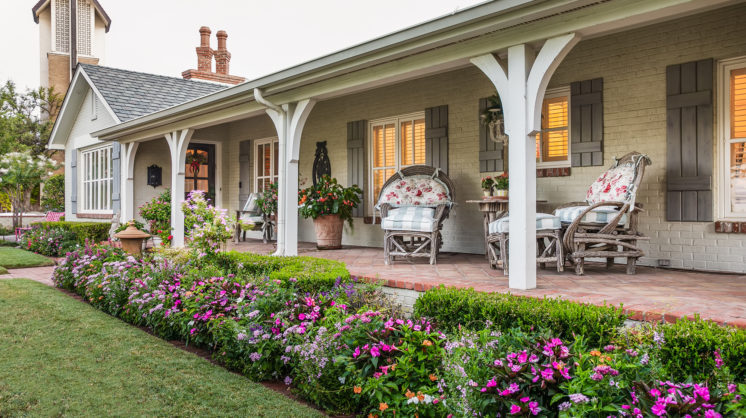 “Those are my colors,” Medley said with a smile, “especially pink.”

While the clock checks all the boxes on Medley’s list of favorite things, perhaps her most favorite thing about it is how she discovered it … twice.

Medley first saw the clock in an antique store in Normandy, France. She was on a buying trip, procuring antiques to sell back in Oklahoma City. She fell in love with the clock immediately, but there was a whopping price tag attached, so she decided to pass. However, she never
forgot about it. On a return trip to France years later, she was thrilled to see the clock was still there.

“I almost didn’t buy it because it was more, but then I thought, ‘You know, I’ve thought about this clock for three years.’ So, I got it, and now it’s in the home,” Medley said. When an interior designer who specializes in French antiques brings one into her home, you know it’s extraordinary.

Medley has been shaping her Nichols Hills home since 1998. Renovations began after her teenage daughter, Marysa, asked to redo her room and bathroom.

The home hasn’t undergone any major changes since then, but Medley has updated fabrics and paint colors throughout the years. 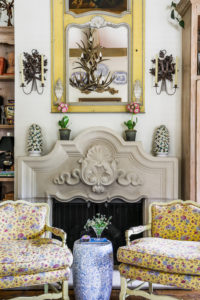 Today, 25-plus years of curated collections fill Medley’s home. Almost everything has a story. The 1915 Steinway piano was her grandmother’s first piece of fine furniture. The kitchen and pool house floors are French antique clay tile, at least 100 years old.

“I like tradition, and I think that goes along with [liking] France and history,” Medley said.

The dining room table and chairs belonged to Medley’s mother. The French antique chandelier hanging over it is dotted with crystal, bronze and cameo profiles. Little boxes and figurines layered on tabletops capture Medley’s love of cherubs, animals, hearts and flowers.

“With Nora, it’s a distinct style,” said Kimberly Hiddleston, longtime friend and interior design collaborator. “You can say, ‘That looks like Nora.’”

Medley and Hiddleston became friends when Hiddleston’s mother, Judith Stone, worked at Covington Antique Market with Medley and Barbara Covington 20 years ago. Hiddleston helped with various projects for the store. After it closed in 2014, Hiddleston and Medley continued working together, united by a shared appreciation of antiques.

“There’s just something about the style of the French: It was romantic, the way it curved,” Medley said, noting Louis XV furniture is her favorite. “The furniture—unlike some new designs—is technically perfect, with just the right proportions. It’s quality made; it was made right. And it will last you forever, if you take care of it.”

An Act of Love

Medley and Hiddleston are quick to consult one another on various projects. Medley’s outdoor space is one of them. Every season, Hiddleston plants the beds and pots with annual color.

“I don’t do this for a living, it’s just an act of love,” Hiddleston said. “On Nora’s, we do something different every year. I’m given free rein, as long as it has pink.”

However, Hiddleston has learned not all pinks are created equal. Soft pinks and bright pinks are preferred. 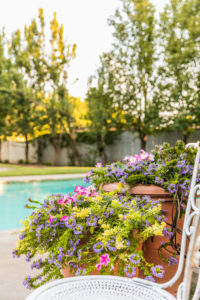 “One year, I tried to put begonias—because they were pink— along the side of the house. Well, they were not the right color of pink. They leaned more toward red,” Hiddleston said with a laugh.

“Some years we’ve loved more than others,” Medley interjected with a smile.

Hiddleston likes to mix annuals from local growers with unusual finds, shipped in from all over the world, from big-box retailers.

“I like instant gratification, that’s why I am into annuals,” Hiddleston said. “I like playing with the color combinations and textures, and packing it tight.”

It’s no surprise that the layered arrangements outside the home mimic the layering inside. It is all very thoughtful and pretty, with pink throughout.

“There’s never been a point where you’ve said, ‘That’s too much pink,’” Hiddleston said.

“Never,” Medley agreed. It’s just the way she likes it.