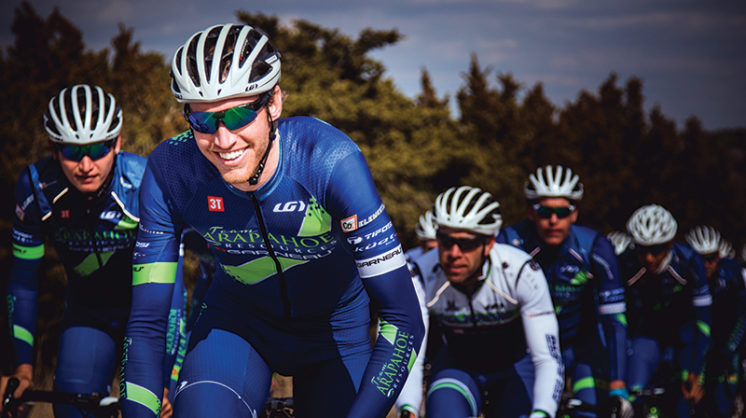 If you’ve ever encountered a phalanx of Team Arapahoe Resources cyclists around the metro, you’ve probably taken notice – vividly arrayed in blue and green, they make a striking visual tableau. As members of Oklahoma City’s first professional cycling team, they and director Chad Hodges are hoping to have an equally visible impact on the future of their sport in the 405.

Just sitting across the table at a coffee shop from Chad Hodges is an experience. The air is full of endorphins, which roll off him in nearly visible waves and may well give everyone in the vicinity a contact high.

They ride a lot, about 20 hours per week, and they ride fast, at an average pace of 22-23 miles per hour. There are a dozen of them, and in addition to making local cycling history, they consider themselves to be ambassadors for their sport.

This smiling, dapper 37-year-old and his merry band of elite cyclists have brought Oklahoma City something never seen before: professional bicycle racing. You’ve probably seen them zooming around the 405 in groups of five or so, wearing vivid blue and lime green jerseys.

“You need to not be what people complain about,” Hodges says. “We wave to people as we pass. We’re friendly. I just think you should be. Ultimately we want to foster a more bike-friendly culture in Oklahoma. We want to be good for cycling.”

Team members come from across the country – Texas, South Carolina – and around the world – Germany, Guatemala and elsewhere. Five are salaried, and that’s thanks to the visionary support of Arapahoe Resources and its manager Paul Kloberdanz. 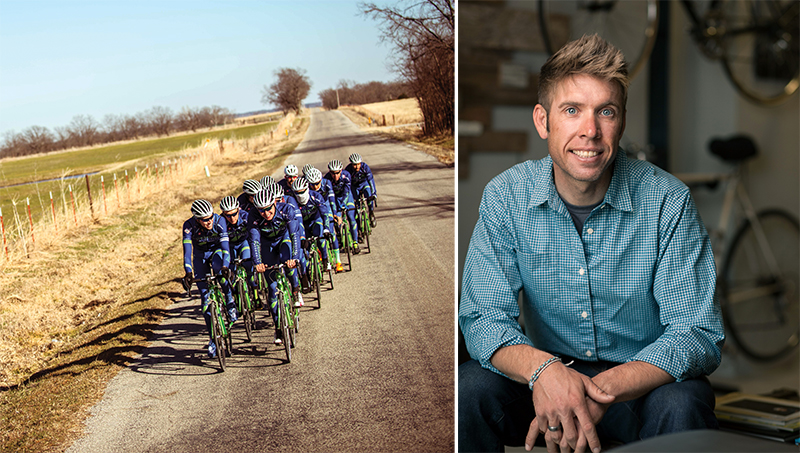 “We supported DNA Racing last year and witnessed their successes with the local cycling community and the Oklahoma City Pro-Am Classic, and saw the team’s great potential as an ambassador in the sport of cycling for the state of Oklahoma,” Kloberdanz says. “This new partnership takes the team to that next level. Team Arapahoe Resources is a team with principles centered on hard work, dedication, perseverance, community and ethics. The DNA Racing team embodies these same principles.”

Team Arapahoe Resources is an offshoot of DNA Racing, which is Hodges’ brainchild.

“DNA Racing came about in 2008. I’d been riding for a few years and had ridden with a club and for Bicycle Alley. I wanted to try to bring in a different level of riding,” Hodges says. It’s a bigger group, competitive, too, but with a secondary mission of bicycle education and advocacy in the community.

“What’s great about cycling is that you can find what you need on a bike. If you just want to get out in the sunshine, you can do that,” Hodges says. “If you’re stressed and you just need to go hard and wear yourself out, you can do that.”