Randel Shadid: At the Helm of History - 405 Magazine 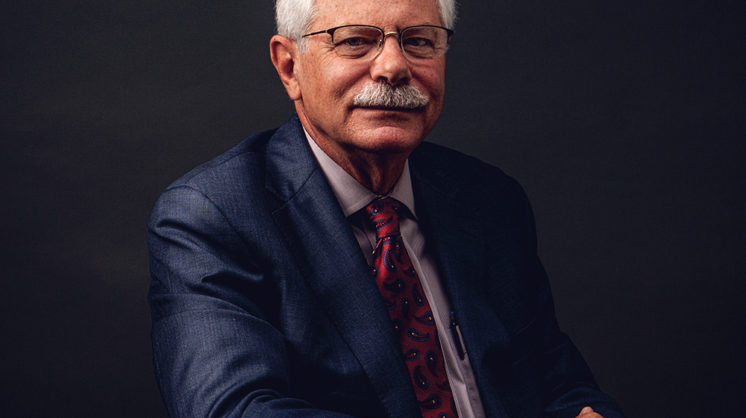 Once upon a time, there was a sleepy little town called Edmond. A narrow two-lane expanse of asphalt separated it from the larger metropolis of Oklahoma City – and sure, it had a TG&Y and an Anthony’s, but for the most part, Edmond was a quiet little suburb with a small-town charm all its own.

In 1973, a young attorney named Randel Shadid came to town, and decided to call Edmond home. A few years later – in 1979 – he was elected to City Council, and he went on to serve 16 years as Ward One Councilman, before being elected Mayor in 1991. Still an Edmondite, Shadid has been an eyewitness to the city’s growth through good times and bad.

What was Edmond like when you first came to town? “Edmond in 1973 was much like Altus, in that the population was the same and even the mascot for the high school was the Bulldog. I graduated from Altus High School in 1965, then received my law degree from the University of Oklahoma before moving to Edmond. Back then, it had a small-town atmosphere but was close to [the] amenities of Oklahoma City, without the headaches. Edmond had great potential for a young lawyer looking to build a practice. Now, 44 years later, I am still practicing. Someday, maybe I will get in the game!”

Did Edmond have any favorite watering holes back in the day? “Yes, the Green Hog was an old dive in downtown. I went there, but not regularly. It was one of a kind: dirt floors and beer. Being of slight physique back then with a loud mouth, I learned early on to stay out of places like that, because trouble always found me.”

How does today’s Edmond compare to the 1970s? “It has multiplied in size by four. Bigger city, more restaurants and shopping, better parks, great public art. Downtown still has that small-town feel, and is viable – which you can’t say for many downtowns nowadays. I remember what a big deal it was when the first McDonald’s came to town. Edmond had arrived.”

One of the darkest days in the city’s history came in the summer of 1986, in what’s become known as the “Edmond Post Office Massacre.” What do you remember about that? “I was acting mayor that day. Worst day of my life. I try to put those memories behind me, but never will be able to. I try to be out of town on the anniversary date so the press can’t find me. It still makes me cry to talk about going through the building with Oklahoma County District Attorney Bob Macy and Police Chief Clint Dedick, after the officers left the building. I never felt rage like I did that day, standing over the shooter’s body and viewing all those innocent victims.”

On a much happier note, what were some of your accomplishments during your terms in office? “During my time on the council and as mayor, we bought land for Mitch Park, and we built Lake Arcadia. We fought with the Corps of Engineers over costs, implemented restrictive sign ordinances, passed the first no-smoking ordinance in the state and enacted commercial landscape standards. Then we built the Covell and I-35 interchange, passed stronger site plan standards, passed drainage utility ordinance and gained knowledge on how to get a public art ordinance drafted and then implement the program.”

Tell us about your family. “My first wife was Mitzie; she died in 1990. We have two grown sons – Jerame lives in Dallas and Jerod works with the Oklahoma City Planning Department and lives in Oklahoma City’s Paseo District. I married Dana Hieronymus Shadid 21 years ago. I needed some eye candy! She is a political activist, and has been active and passionate about nonprofit work her entire adult life. She ran my phone bank the first time I ran for mayor. We also share a passion for art; she was the impetus behind my art affliction and establishment of the public art program in Edmond.”

Do you still frequent the Green Hog? “No Green Hogs [are] left in Edmond. Sad to lose cultural icons. But now we have the Martini Lounge, so we are movin’ on up!”