Recreation and Parks in Indiana - 405 Magazine 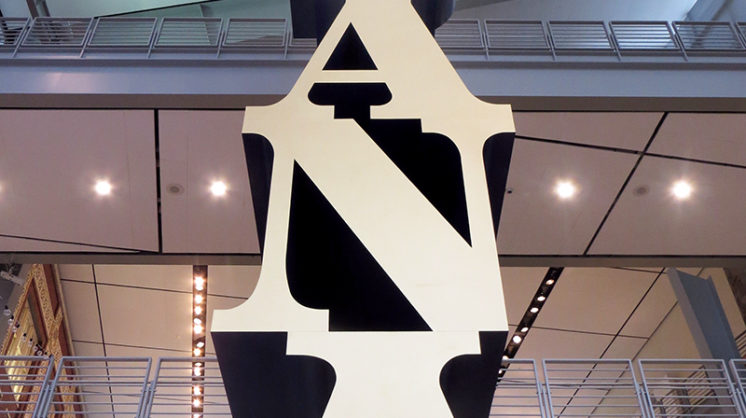 All I knew about Indianapolis was that it is the home of the Indy 500, which, because I’m not a racing fan, ranks right up there with watching “Gilligan’s Island” reruns. I had a lot to learn.

Marriott Place in downtown Indianapolis is home to the beautiful blue glass tower of the luxurious J.W. Marriott, as well as three other Marriott properties, providing accommodations to fit all purses. All are adjacent to White River State Park, 250 acres of downtown green space and activities. I stayed in the J.W. Marriott, in a room with floor-to-ceiling windows overlooking the 1888 Renaissance Revival Indiana State Capitol. But it was the state park with its many attractions that captured my attention.

Artist Robert Clark showed his affection for his state by changing his last name to Indiana, and by creating this almost 50-foot-tall “Indiana Obelisk” for the Indiana State Museum.

Just south of Marriott Place is Victory Field, home of the Indianapolis Indians, the AAA farm club for the Pittsburgh Pirates. Baseball, brats and beer make this a summer favorite.

North of the hotel is the Eiteljorg Museum of American Indians and Western Art. Although small in comparison to the collections at the National Cowboy and Western Heritage Museum, the 30,000 square feet of gallery space house impressive examples of Western art ranging from Thomas Moran, Remington, Russell and Georgia O’Keeffe to Allan Houser and Andy Warhol.

Next door to the Eiteljorg is the Indiana State Museum, with an all-encompassing collection of Indiana history and culture. On the first floor, exhibits feature geology and natural history.

The museum also hosts an IMAX theater featuring film, digital, 2-D and 3-D shows. You won’t be able to miss the INDIANA sculpture by artist Robert Indiana: It’s so big, they had to build the museum around it.

For sports fans, a few steps take you to the headquarters of the NCAA and the Hall of Champions. Not only are there great exhibitions, visitors can try their hands – and feet – at a variety of activities. Test your skill as an umpire or referee; strike out a batter; see what it’s like to have a tennis ball coming at you at 73 mph or shoot some hoops. And, of course, there are banners for the current championship winners in each of the 24 NCAA championship sports. OU is represented for both men’s and women’s gymnastics. 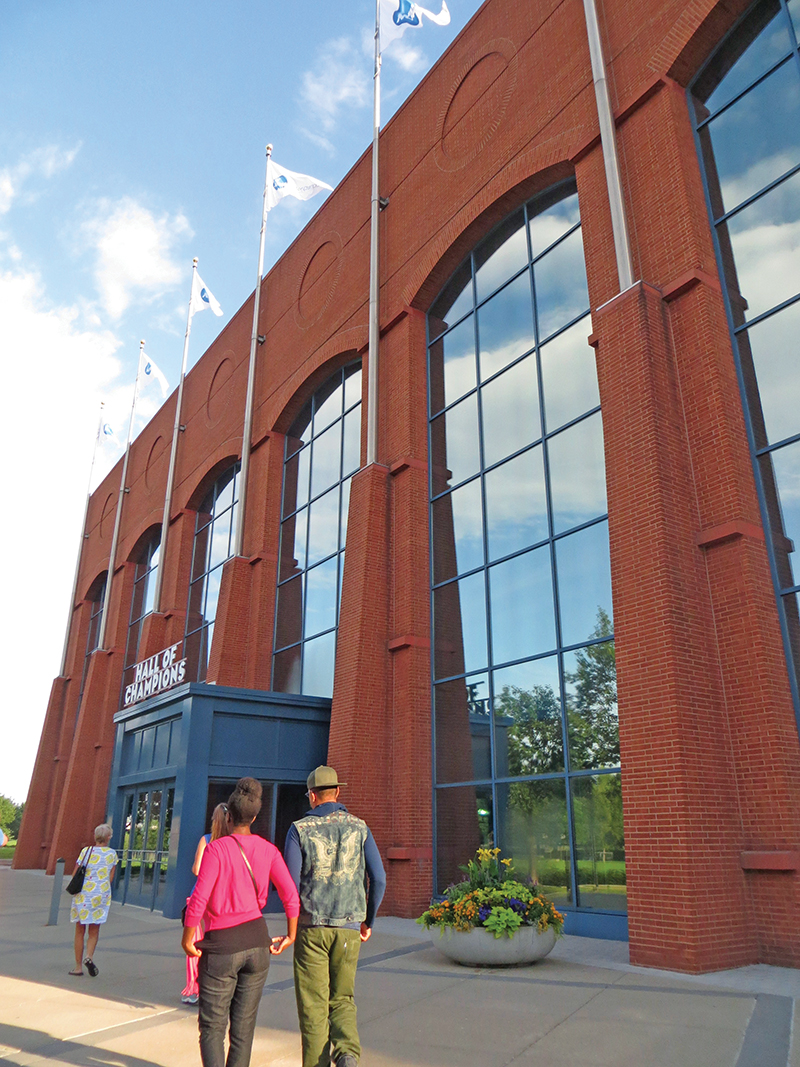 Architect Michael Graves designed the NCAA Hall of Champions to remind visitors of a football stadium.

Also in the park is the Indianapolis Zoo. The orangutans have to be the primo primates here – with a towering indoor area cobwebbed with ropes, these endangered animals have lots of elbow room when they want to be indoors. Outside, in addition to ground spaces, a network of cables, platforms and bridges 45 to 80 feet high allow the orangs to travel around the exhibit over the heads of guests, plus, a gondola ride takes visitors into the sky for a closer look.

Zoo visitors also can take advantage of special animal encounters including the Animal Art Adventure. I watched a 1,500-pound walrus named Aurora paint a picture with her whiskers. She also blows kisses, waves, smiles, puts her flipper over her heart and will bestow a slightly slobbery, sucking kiss on your palm.

The Flamingo Mingle is a special treat. Encircled by guests, the flamingos are free to explore. And they did – picking at one lady’s sandals, checking out a crew cut and even rubbing my leg. The Indianapolis is triple-accredited as a zoo, aquarium and botanical garden.

The White River State Park is a big place, but there are easy ways to get around. See the park by bicycle, pedal-powered multi-seater, paddleboat or Segway. You can even take a gondola ride with a singing gondolier. 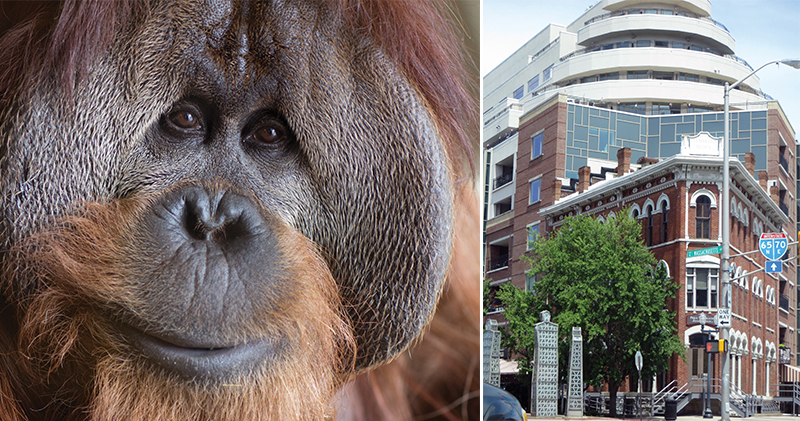 • Male orangutan Azy is the boss of the 10 orangutans in the Simon Skjodt International Orangutan Center at the Indianapolis Zoo.

A few blocks from the hotel is Circle Centre Mall, with more than 100 retailers anchored by department store Carson Pirie Scott. Farther afield, the Mass Ave Cultural District is a revived historic area with boutiques and restaurants. Don’t miss The Best Chocolate in Town. Decorate has great home items, pillows and more, and Indy Reads, a nonprofit used- and new-book store, will capture the heart of any bibliophile.

Hungry? Try Harry and Izzy’s back in Circle Center. A sister restaurant to the iconic St. Elmo Steak House, Harry and Izzy’s also serves the legendary St. Elmo Shrimp Cocktail, a combination of cold shrimp and a sauce so hot it has made grown men cry. The steaks are fantastic, and the desserts will rock your world.

I’m not big on hotel restaurants, but the Osteria Pronto at the JW Marriott could make me a believer. The Hay and Straw – chive noodles and egg noodles, lardo, English peas, garlic cream and pine nuts, topped with a soft-boiled egg – sounds strange, but it was wonderful. For lunches, I can recommend the cafes at the Eiteljorg Museum and the State Museum.

Two more museums capped my Indy visit. The first, Rhythm! Discovery Center, has to win the prize for loudest museum. Dedicated to percussion, it features every kind of instrument you can bang, shake or hammer. And there are lots of hands-on opportunities. The museum, once known as the Percussive Arts Museum, was located in Lawton, Oklahoma, for several years.

Another museum with an Oklahoma connection – it was the inspiration for the Jasmine Moran Children’s Museum in Seminole – is Children’s Museum Indianapolis. A kid’s paradise, the museum has plenty to interest adults, too. A sparkling space exhibition, an archaeology display, dinosaurs and an exhibition on how three children named Ann Frank, Ruby Bridges and Ryan White changed the world are just a few examples of the many features packed in this almost 500,000-square-foot facility. Future plans include a large expansion called the Sports Legends Experience, dedicated to health, fitness and sports.

I saw a lot in Indianapolis, but missed even more. I need to go back for the art museum, history museum and monuments … and who knows? I might even make the Indianapolis Motor Speedway Museum.