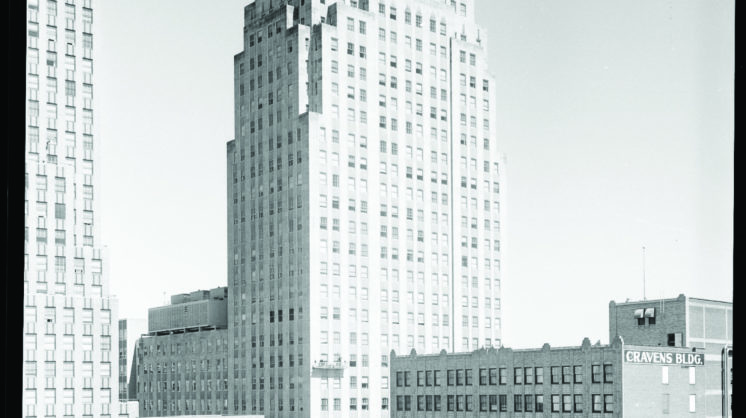 Few structures figure as prominently into the history of Oklahoma City as the First National Bank Building. The 33-story, Art Deco gem at 120 N. Robinson Ave. was built in 1931 and remained a symbol of the city’s young and ambitious character for decades.

Resembling the Empire State Building, it was the largest and costliest building constructed during the oil boom of the 1920s and 1930s – with a price tag in excess of $5 million, according to reports at the time.

Perhaps First National’s most impressive feature was its Great Banking Hall, a cavernous, three-story space encompassing 14 Corinthian columns, Art Deco chandeliers and a hand-painted ceiling. The hall is flanked by four murals painted by well-known artist Edgar Spier Cameron; two depict Oklahoma’s April 22, 1889 Land Run, another the Louisiana Purchase and a fourth the Cherokee removal to assigned lands in Oklahoma. The Great Hall bustled with activity until the final banking tenant departed in 1992.

The building also was home to one of the Oklahoma City’s most iconic private clubs, the Beacon Club, from 1941 to 1997. Located on the 31st floor, it played host to the likes of longtime Chamber of Commerce President Stanley Draper, oilman Dean A. McGee and media mogul E.L. Gaylord. In its heyday, luminaries such as comedian Bob Hope and the Shah of Iran were spotted at the Beacon Club, according to media reports.

If the oil boom of the early 20th century fueled the growth and prosperity of the First National Bank and its emblematic building, it was, ironically, the oil bust of the 1980s that led to its decline. Reeling from banking woes touched off by the Penn Square Bank collapse and low oil prices, First National Bank & Trust Co. failed and entered receivership in 1985. The one-time hallmark of Oklahoma City promise began to deteriorate.

Ownership of the property changed hands numerous times amid failed promises of restoring the structure. It wasn’t until 2017, when local developers Gary Brooks and Charlie Nicholas purchased the building, that restoration began in earnest.

The project, due for completion by the end of 2021, has racked up some impressive numbers: 1.1 million square feet of reclamation work, 45 million pounds of debris, 2,600 windows to be cleaned or replaced, according to the Oklahoma City Chamber of Commerce.

When all is said and done, the project is expected to run in excess of $275 million. The building, to be called the First National Center, will house of a 149-room hotel, 210 apartments, two restaurants and 35,000 square feet of retail and commercial space, with the Great Hall serving as the hotel lobby. Plans are in the works for a rooftop pool and dog park, outdoor kitchens and a theater. And while it’s not listed on blueprints, the renewed ambition is everywhere.