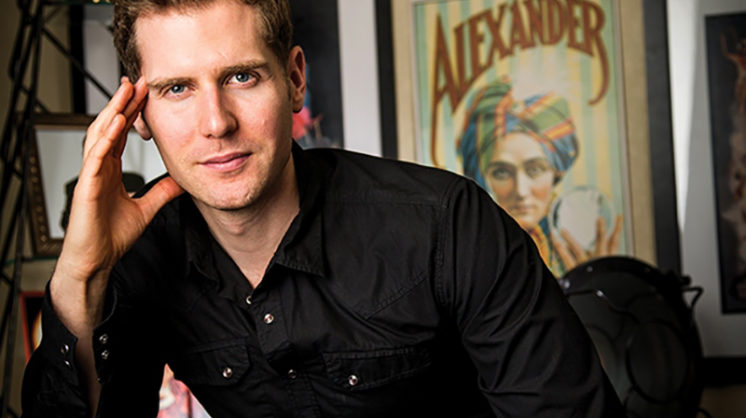 Before He Performed For Sold-Out Live Audiences Around The World and on network television, illusionist Rob Lake was just a pesky 10-year-old with a set of trick cards, on a madcap mission to become a magician. Mesmerized by a magic show he saw as a boy on vacation, Lake considers the experience to be a defining moment in his life.

Happily, the grown-up, angel-faced magician no longer has to saw his sister in half to entertain audiences. Accompanied by a very talented entourage of technical and performing crewmembers, Lake crosses the globe several times each year to entrance fans of all ages. He’s returning for the second season of the CW series “Masters of Illusion,” which resumes this month, beginning Friday, January 9 at 8:30 p.m. CST.

During his brief return to Norman over the holidays, Lake refrained from spilling any secrets to his bag of tricks, but our exchange with him was no less magical for it.

Are you a native Oklahoman?

Yes, I grew up in Norman.

When did you know this would be your profession?

I saw a magic show when I was on vacation in Branson at age 10, and I knew for sure that this was what I would do for a career. From that point, I drove people crazy with all the tricks I practiced on them. Later, I started doing shows and civic events, birthday parties and all that.

When did you start getting really good?

I did my first illusion at age 14.

Is there a Magician curriculum at OU?

No. In fact, I was studying at OU when I decided it was eating me up not to be pursuing this career, so I left college.

How did that proclamation go over with the folks?

They weren’t too pleased, as you might imagine. But if it was reckless, staying in school seemed even more reckless to me.

It’s probably fair to say you’ve had quite an education within your profession.

It’s been really diverse. I’ve learned a lot of engineering in creating my illusions. When I wanted to know how a magician sawed a lady in half, I had to reverse engineer the illusion to figure it out so I could re-create it on my own.

Where do you find a guinea pig to practice a sawing illusion?

My sister, Katelynn, was my first assistant.

Assuming she’s still intact, are you still on speaking terms?

Yes! Now I have a crew of about 10-15. I audition dancers in New York City and I have about five who get cut in half these days.

Five – not five and half?

Should I be calling you an illusionist, rather than a magician? Illusionist technically falls under the larger umbrella of magic, but people use both terms interchangeably.

From the perspective of someone who has only thrilled a few reluctant audiences with Marshall Brodien’s TV Magic Kit, this seems like a dream job. Is it?

Absolutely. It’s also exhausting. I travel all around the world and each live show is a massive production that takes about 12 hours to set up, with music, sound effects, lighting, huge props and several rehearsals.

Live shows must have their own set of foibles.

That’s right. We rehearse contingencies regularly, in case something goes awry and we have to go to Plan B, C, D, etc.

What would you be doing if this weren’t your job?

Luckily, it is my job, because I can’t imagine doing anything else!

You create all your own illusions?

Can you ever shut off your imagination, or is it always on overtime?

No. I can’t shut it off, but I’ve learned to keep a notebook at my bedside because I often find the solution to an illusion during my sleep.

Have you had a mentor in this profession?

Yes. A comedy magician named Jim Smithson, from Norman, became my mentor when I was in junior high school and I tell people that he “raised me” in this profession. He passed away a couple of years ago.

What’s the best advice he gave you?

Trust yourself. He also told me to forget the magic and just focus on the experience for the audience.

I think that’s what makes me so Disney-obsessed. You get pulled into the experience and you’re not thinking about the work that goes on behind the scenes. It’s the same in the theatre.

Do you credit those things as inspiration for your own creative process?

Yes. I think Walt Disney has been the most influential. I also love studying the history of magic and find a lot of inspiration there.

I’ve noticed that your props have a lot of detail the audience will probably never see. Is that a reflection of your appreciation of historical accuracy?

It’s important to me to create an experience where the audience is totally immersed, right down to some very minute details.

Have your parents cooled off about the college thing?

Yes. They travel to a lot of my shows around the world.

When will you do your own disappearing act and retire?

I’ll know it’s time to quit when the fun ends.