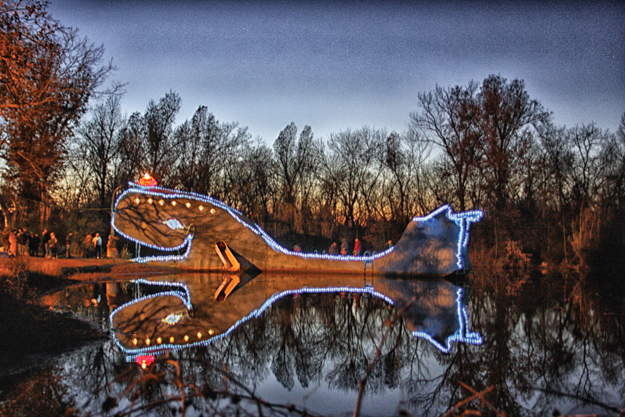 There’s Something About Christmas In Oklahoma That Brings Out A Ye Olde Vibe Across The State.

Every December, the brick streets of Guthrie welcome revelers to a Territorial Christmas celebration and Victorian walk amid blocks of brick buildings that display bonnet-clad and mutton-chopped townsfolk in store window vignettes.  The annual Fort Reno Christmas Guns reenact an old German holiday tradition of firing heavy weaponry to chase away evil spirits. In Oklahoma City, a longhorn cattle drive leads a days-of-yore lineup past the wooden storefronts up Exchange and down South Agnew for the Stockyards City Cowboy Christmas Parade, an Old West procession culminating in a cowboy-hatted Santa riding in on horse-drawn carriage.

So it is surprising that one of Oklahoma’s newest Christmas traditions is inspired by, if not the 21st century, at least the 20th. The event involves no hoop skirts. No firearms. No cattle or horses. Not even Santa.
Instead, it celebrates what may well be the best-known structure in Oklahoma: a grinning 80-foot-long concrete whale.

The Blue Whale of Catoosa is located on land of the old Cherokee Nation, between Tulsa and Claremore, north of the Hard Rock Casino, in a swimming hole off Route 66. It was completed in 1972 by zookeeper Hugh Davis as a gift for his 34th wedding anniversary to Zelta, his fellow adventurer, who shared his sense of humor and love of the untamed.

After years as a community hub for swimming and picnics, the whale was closed in 1988 and seemingly ceded to the forces of time and vandals. But in the new century, the town of 7,000 set its mind to resurrecting its old friend.

The whale has since evolved into a talisman of quirky Americana and retro adventure, beckoning like a Mother Road Moby-Dick. Pilgrims from around the world, and across town, harness their inner Jonah by entering through the smiling mouth into the steel-ribbed belly, and maybe scaling the straight-up ladder to peer out the portholes. In the summer of 2010, Time magazine named the whale as one of America’s Top Roadside Attractions. Its funky blue visage, infectious smile and prime location on Route 66 have made it part of the Western canon of American photo ops.

The first Lighting of the Whale was held in 2010, by a group of Catoosa volunteers calling themselves Fins of the Blue Whale. They dug into their pockets to buy strings of lights, filled each of the whale’s portholes with an LED snowflake and outlined the length of the whale with bluish-white lights, including an artful swirl in the center of the east-facing eye, which greets the sunrise with a perpetual look of happy surprise. (Hugh Davis designed the eye on the other side, facing west, to be droopy and sleepy, ready to drop with the setting sun.)

The inaugural lighting was attended not by tourists or far-flung fans, but by a few dozen locals, including the grandson and great-granddaughter of Hugh and Zelta. A portable sound system played Christmas songs and, as darkness neared, Catoosa’s school superintendent took the mic to offer an invocation:  “Dear Father, we just thank you for this opportunity to gather together as a community around a symbol of our community worldwide. Father, thank you for the people who care enough to take time to redevelop and work here and, Father, help us as a community to continue to unite together…” The mayor waxed poetic about Mr. Blue as an international icon before leading the crowd in a countdown to the throwing of the switch.

The lights blazed, spectators gasped and clapped, a bonfire burned nearby to take off the chill and a bundled-up choir from Rogers State University in nearby Claremore sang carols. There was no admission charge, and nothing for sale. Catoosans visited, hugged, walked in and out of the whale, admired the new reflection in the pond water and joined in the singing.

The townspeople had gathered to save the whale. And, aglow under the strings of Christmas lights, the whale is saving them right back.

Editor’s Note: This is the fourth installment in a continuing series as author and photographer M.J. Alexander chronicles her travels across the state of Oklahoma.