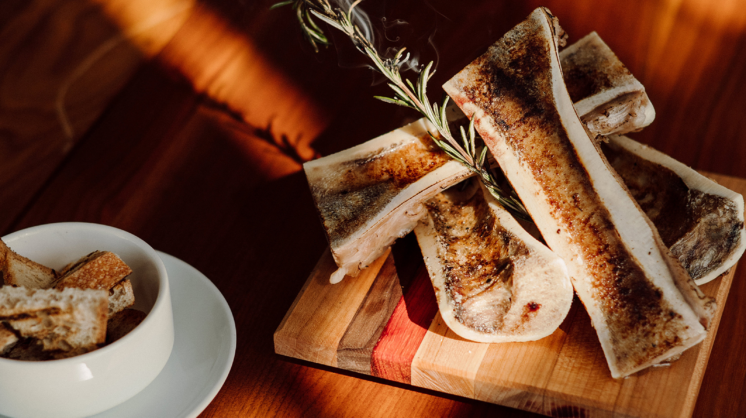 Vast‘s 10th Birthday is an unsubtle reminder that the tower in the heart of downtown has only been open since October 2012. That’s right. While it seems now like it’s always been there (with its “baleful eye of Sauron” and all the other jokes), the Devon Tower is only 10 years old, and it’s sharing a birthday with our top-of-the-city restaurant Vast.

“I think we are now what Vast was always supposed to be,” said Chef Kurt Fleischfresser, who’s been the director of operations since 2014. “When it opened, I think the goal was to be like Boulud or Masa — super high-end fine dining — but ultimately, it’s too big of a restaurant to do that.”

Fleischfresser is gracious in the way he discusses the first chapter. In all honesty, Vast’s first two years weren’t great. An out-of-town team that didn’t really get Oklahoma City’s ethos or vibe tried to create something we’re not: cold, formal and a tad pretentious. The second chapter and the transformation into the place we love began when Coury Hospitality assumed operations in 2014 and turned Fleischfresser loose with his decades of experience, exceptional skills, homegrown hospitality and brigade of professional chefs, whom he trained and mentored in his Coach House days.

“I think we created a more attractive package,” Fleischfresser said. “We made changes when we took over, like lowering wine prices 40%, adding art and lighting and changing the focus to regional cuisine. We changed as much as we could to create an accessible fine dining restaurant.”

They succeeded, beginning with minimal rules about dress codes — helpful during summer heat waves — approachable fare, warm service and a focus on the beautiful bar. Over the years, they added a cocktail lounge that’s a bit more casual, gave bartenders input into the creative process, which immediately improved the cocktail program, and then added the Daily Table, a lunch buffet that more locals ought to know about.

“The modified fine dining hasn’t hurt us,” Fleischfresser said. “It works better given the setup of the restaurant because the windows are the focus, so we try to maximize the guest experience around the view.”

In other words, no army of white-gloved servers dropping plates in harmony like an unnecessary ballet. There’s no way to get behind a guest with a back to the wall to maximize the views from the windows. It doesn’t make sense in the space, and quite frankly, the service is more pleasant without such flourishes. Dinner feels like a long conversation with good wine and a view of the sunset (or storm!) and less like an anxiety attack related to silver- ware choices.

The menu shift brought more Southern, Oklahoma-centric and Gulf Coast food to the menu. Those are Fleischfresser’s specialties, along with French cuisine, a skill set that occasionally shows up in items like the chocolate fauvet or dauphinoise potatoes (the same ones from the Coach House days and still worth the price of admission). Executive Chef Paul Langer helms the kitchen, which is as vast as the name suggests. Banquets are handled by a different culinary team, which free Langer and his brigade to focus on dinner service.

The menu is focused, not sprawling, with an emphasis on locally sourced ingredients, including No Name Ranch beef from Wynnewood. Specialities like seared Gulf shrimp and the pan-seared rack of lamb (smoked first) never cycle off the menu, but Langer adds and subtracts items seasonally, too. Vast also specializes in two other items as different as dishes can be: bone marrow, which is the best in the city, and vegan dishes, which are as thoughtful and delicious as the rest of the menu. Fleischfresser hasn’t survived and thrived for 44 years in the industry without being adaptable, and he embraced vegan diners quickly and without complaint.

“We want all our guests to have the same high quality experience,” he said. “Vegetarian and vegan food was bad for years — mostly steamed vegetables or a salad made as an afterthought. Restaurants have come around, and there is no reason why we shouldn’t be approaching these Chocolate fauvet dietary preferences with the same care and quality we apply to all diner preferences.”

The bar also caters to different tastes, with excellent cocktails, a solid beer list, great top shelf options and an unsurprisingly excellent wine list. Fleischfresser’s wine acumen is underappreciated by those who only know him as a chef or culinary director. His skill with wine is on display in the wine list, which ranges all over the world to major and emerging wine regions. Evan Askey is the restaurant manager, and Fleischfresser is quick to lob compliments his way.

“He just keeps getting better and better, and so does our bar program because of him,” Fleischfresser said. “Our cocktail sales are booming, and he takes input from all the bartenders, which leads to a better, more creative cocktail program.”

Vast was always meant to be a place OKC diners could be proud of, a place where you take family or friends when they’re visiting, a destination for engagements, birthdays, anniversaries — all the hallmark dates that require excellence and memorable experiences.

“I think we’re an asset to the city,” Fleischfresser said. “I think we really are a place where you can show off Oklahoma City.”