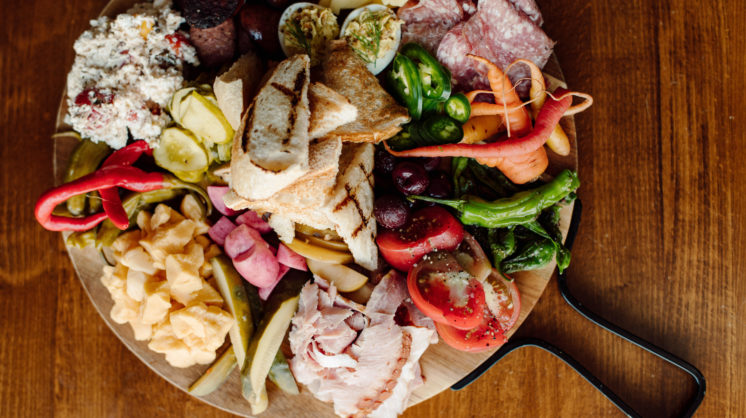 The unexpected thing about getting nominated for a James Beard Award is that once the chaos passes, you’re still left to do the same things that got you the nomination in the first place: open, prep, cook, tear down, clean up, order, stock, etc. It’s work. That’s fine with Chef Zach Hutton of Scratch Kitchen & Cocktails at 605 NW 28th St. in the Paseo Arts District; he’s been a hard worker since childhood, which is especially fortunate since the name of the restaurant isn’t a gimmick — the team makes virtually everything from scratch.

“Home cooking was a mandatory way of life in my family,” Hutton said. “We grew, caught, shot or raised nearly everything we ate.”

The family hub was at his maternal grandparents’ home in Apache, where the table usually held chicken, pork, deer, quail, dove, catfish, bass or crappie. Game and fish were staples in their diets, a common option in rural communities. His grandparents canned vegetables, made chowchow and tended a garden that is still around today.

“My mother moved into the old house after my grandparents died about six years ago,” he said. “Everyone in the family contributed to my love of cooking, but my grandparents were my biggest influence. My mom is still tending their garden.”

Oddly enough, sitting down for a meal at Scratch will make you believe that there is a difference between a chef who loves gardening and one who doesn’t. Vegetables, greens and starches end up on nearly every plate at every restaurant, but it’s rare to find chefs who treat them with the same care and attention given to the proteins or “stars” of the dish. It’s no exaggeration to say that Hutton’s black-eyed peas may be the greatest version you’ll ever taste. They are so flavorful and so hearty that a bowl of the peas would be enough for you to leave happy.

Honestly, that would be an option if you asked for it, and why wouldn’t you?

Beyond that dish, though, the menu is a reflection of everything Hutton — and Ben, his twin brother and sous chef — loved as kids, interpreted by a very talented chef who is committed to slow food. Ninety-five percent of the products at Scratch come from Oklahoma, and a sizable percentage come from central Oklahoma. In fact, Hutton and his wife, Kayla Hutton — who handles front of house and the bar program — are fixtures at farmers markets around the city, beginning in Paseo. From there, sourcing goes in concentric circles, trying to get products from places as close to the restaurant as possible.

The commitment to slow food comes with some problems, sourcing in times of supply chain disruptions being one. Another is confusion among guests about why something isn’t being replaced, or why the order is taking longer than they’re used to. Making things from scratch takes time — more time than people usually wait in fast casual restaurants. And Hutton won’t replace an ingredient with something that’s easier to procure or wasn’t part of the dish to begin with; if it’s gone, the dish is eighty-sixed. It’s a commitment to an ethos that people prize from a distance more often than from a table in the restaurant … but educating people about food, sourcing and the value of being local is a passion for Hutton.

To help with the wait, Kayla Hutton’s bar program — a collaboration between front and back of house where even the chefs can contribute a recipe — features creative craft cocktails as well as solid classics, a good wine list and plenty of local brews. Having a cocktail or glass of wine after you place your order makes the wait a little easier to manage, and so does an appetizer. Right now, that’s Benjamin Lee bison (out of Sayre, Oklahoma) tartare or delicious deviled eggs.

Hutton does a large-scale menu change every six months, and on the seasonal changes between, he makes tweaks. That includes the brunch menu; get the waffle of the day! Everything is fresh, and he’s happy to tell you where everything was sourced, a list that includes Prairie Earth Gardens (OKC), Prairie Creek Farms (Kellyville), Schwab’s (OKC), Snyder Farms (Prague), etc. The transparency is refreshing, and eating where so much local is supported is an easy yes. That the food, including the No Name Ranch short rib burger, is among the best the state has to offer makes it an even easier yes.