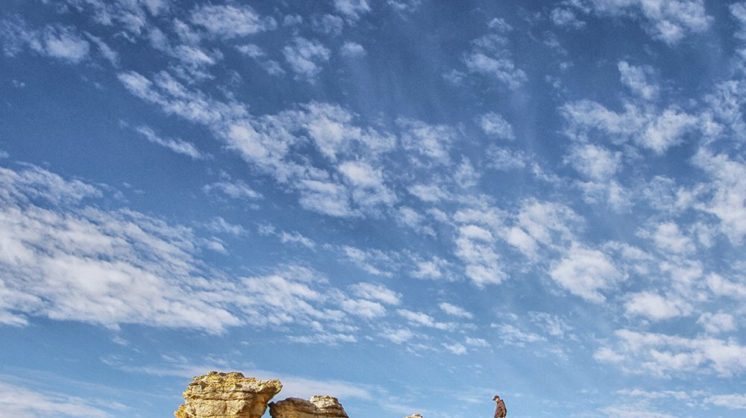 It was almost dusk when the pickup seemed to apparate out of nowhere, careening off a dirt road intersection to roar up on our passenger side in a spray of gravel. The men inside – two in front and two in back of the club cab – held rifles beside them: stocks on the seats, barrels in the air.

They leaned forward to squint through the dust squall, scanning my unfamiliar face and then looking across to the driver, a third-generation Cimarron County resident.

“Got a new one, just a couple weeks ago.”

A labyrinth of eroded sandstone buttes created beneath an ancient sea stands guard near the top of a rise near the Oklahoma-Colorado border. Century-old graffiti, including foot-tall letters spelling out the local name of the site, is etched into the worn sedimentary rock.

After some rat-a-tat chitchat, the mini-militia spun the steering wheel and faded back in the opposite direction in a cloud of dust. Our off-the-grid tour of Cimarron County, led by long-time friends who are descendants of pioneers, continued.

The deal: a backroads glimpse of abandoned farms, ancient rock formations, historic sites and cave petroglyphs tucked behind locked gates and fenced pastures. Photographs were encouraged; the sharing of directions and identifying details was not.

The epic landmarks are under the radar in digital archives and draw blanks in Google searches, existing in the realm of places unmarked on maps that can only be found by those who already know where they are.

In that spirit, these images offer a glimpse of some of the oldest landscapes in one of the youngest states, preserved among the secrets of Cimarron County. 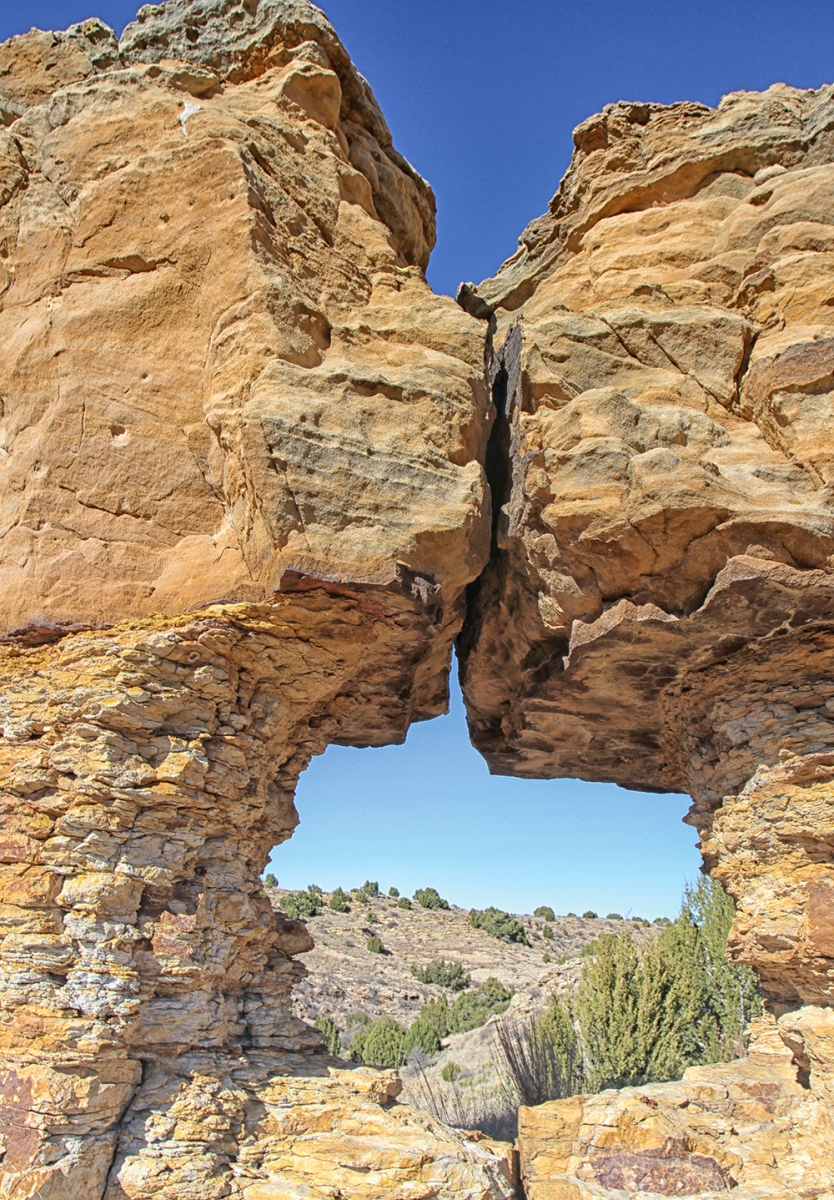 Cimarron County, the 34-mile-wide by 54-mile-long westernmost rectangle of the Oklahoma Panhandle, is the fourth largest – and dead-last least populated – of the state’s 77 counties.

The former section of No Man’s Land has several claims to fame: Cimarron is Oklahoma’s only county without a stoplight, and the only one with a few acres in the Mountain Time Zone. Fossilized dinosaur tracks pockmark the area near Black Mesa, the state’s highest point. It is the nation’s only county to share borders with four other states: Kansas and Colorado to the north, New Mexico to the west, Texas to the south.

It is home to 2,200 souls – about half as many as 50 years ago, and down from the 5,927 population at the time of statehood. Those who remain share a sense of community and a common worldview: in the last presidential election, Donald Trump captured 89.3 percent of the vote. 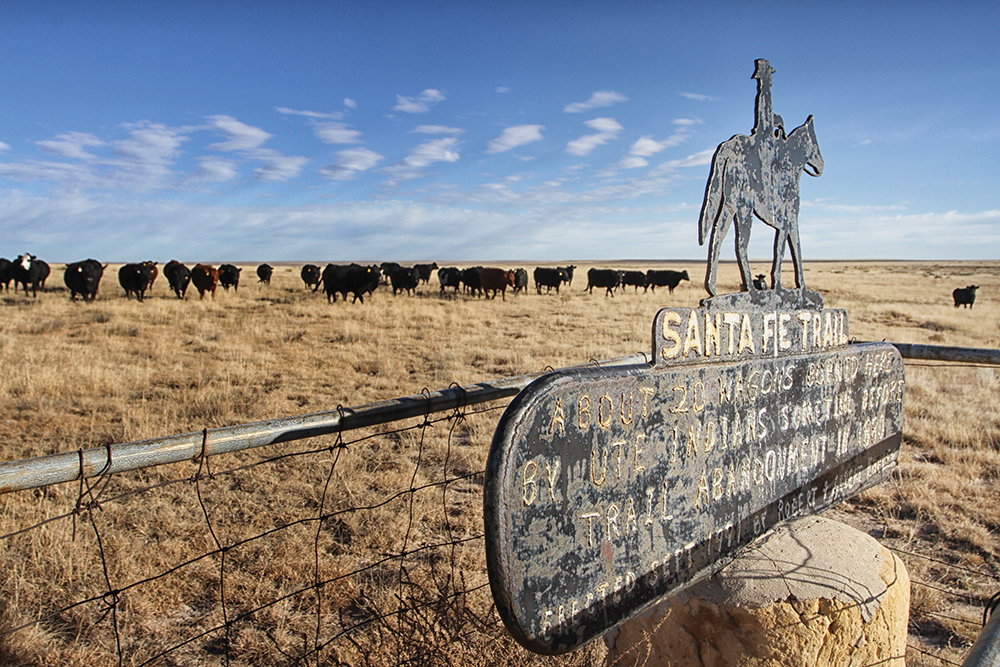 It was only by counting the spoked wheels scattered among the charred pieces of wood that the size of the doomed party could be determined. Sometime before 1880, about 20 wagons traversing the Cimarron Cutoff of the old Santa Fe Trail were ambushed by attackers described as Utes. Dozens of the iron-rimmed wheels stayed where they had fallen, in the shadow of Wolf Mountain, until the metal was eventually salvaged. In 1991, brothers Robert and Albert Koehler, then in their late 70s, “cobbled up a sign,” welding a monument atop a concrete tower and adding a fence to keep off the cattle that graze nearby. 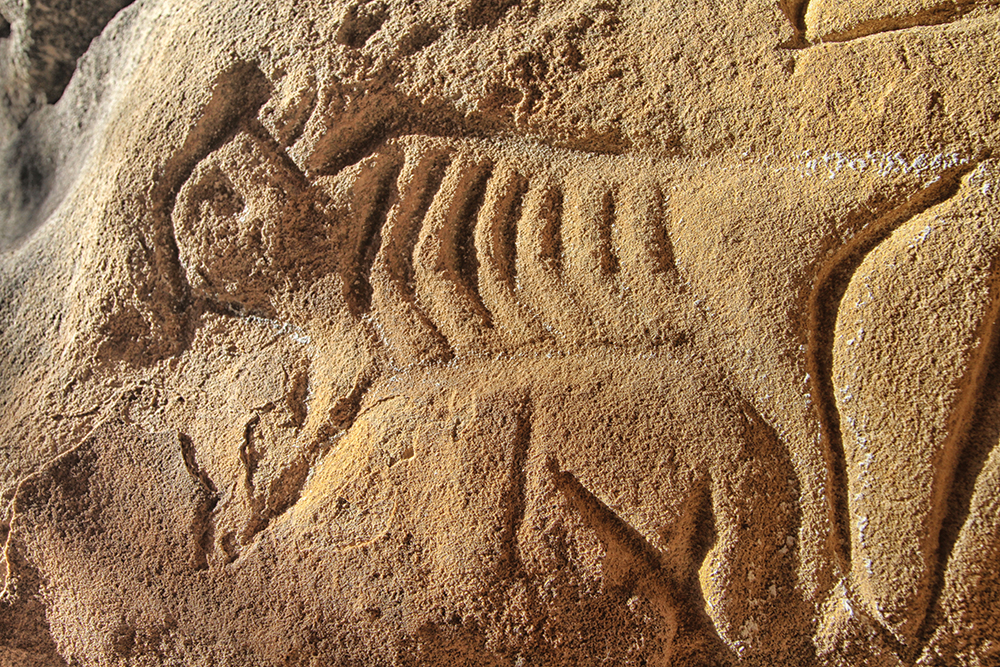 The carvings on Cimarron County’s sculpted overhangs and shallow caves are open to the elements – and to interpretation. They have been hailed as classic petroglyphs and pictographs by some, and interpreted as evidence of Egyptian influence and Celtic travelers by others. Between the world wars, excited locals took researchers into their confidence and swore them to secrecy about the artifacts within. But promises made were soon broken, and expeditions returned without permission to excavate. Newer graffiti now pushes in near original carvings of people and horses and bison – in a tableau exposed to the elements and protected only by their remoteness.