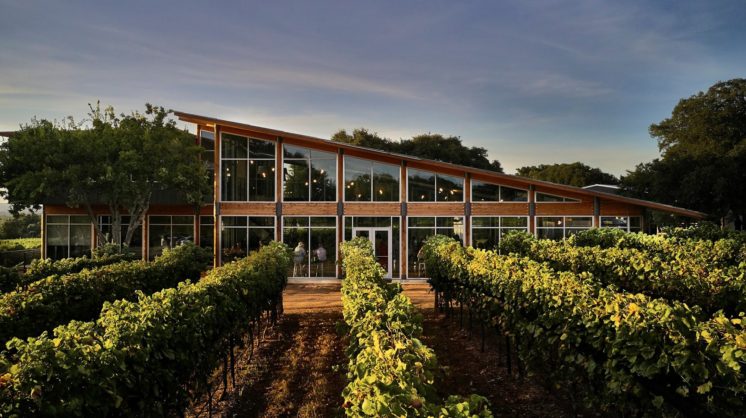 “California has set America’s wine palate,” Steve Newsom said, swirling a glass of Picardan at his tasting room just outside Lubbock, Texas. Picardan is a white blending grape from the Rhone Valley, but it’s also been put to good use in Texas, after some experiments in California about 10 years ago. Newsom, who’s been making wine in the Texas High Plains AVA since converting his family’s generations-old cotton fields to vineyards, is standing in front of an award from the San Francisco World Spirits Competition: a double gold for his Viognier.

Spend any time at all in what locals call the Caprock area—named for the Caprock Escarpment, part of the Llano Estacado, the southern edge of the Great Plains—and you’ll find a fascinating collection of varietals: Vigonier, Mourvedre, Chenin Blanc, Tempranillo, Carignan, Roussanne, Trebbiano, and yes, Cabernet Sauvignon and Merlot. California, though, has taught Americans, for the most part, to drink Cabernet, Merlot, Pinot Noir, Chardonnay, and Sauvignon Blanc. Nothing wrong with that, but it’s not a very interesting menu after nearly half a century—assuming, of course, that American wine history begins at the Judgment of Paris in 1976.

Texas produces Texas wine, which is not as simple a statement as it seems; consider how long Oklahoma has been trying to produce California-style wines. Beginning with the near-legendary Clinton “Doc” McPherson, who founded a wine program at Texas Tech in the early 1970s, Texas farmers and winemakers determined what grew best in Texas based on soil and climate, and because McPherson worked through more than 140 varietals, very little is unknown now.

McPherson’s son Kim graduated the Cal-Davis wine program with the likes of Randall Graham and Doug Shafer. You’ll need to ask a lot of people who the best winemaker in Texas is before one of them says anything but Kim McPherson. His tasting room is in downtown Lubbock, and the sparkling Chenin Blanc alone is worth the five-hour drive from OKC. You can also walk across the street to his wife’s restaurant La Diosa Cellars and enjoy the wines with delicious tapas.

That’s a lot of introductory words to say that no one should have to talk anyone into going to Texas for wine. It’s not a gimmick; it never was. True to form and character, the professionals in Lubbock have been trying to make serious wine from Texas since they started. Is anyone surprised that Texans always believed the state could produce great wine?

The difficult part has actually been getting people to taste them as Texas wines, and appreciate them for what they are, not dismiss them for what they are not. The point of drinking wines from a variety of terroirs is to expand the palate. California wines are often magnificent, as are wines from Oregon, Washington, France, Italy, and yes, Texas. Wines from the High Plains have a family resemblance, just as wines from Napa or Columbia Valley do. That’s what terroir is. It means that wine from one place doesn’t taste like wine from another, in contrast to Newsom’s somber observation that California has set our palate to expect all wine to taste like wine from California.

The High Plains AVA produces about 85 percent of the grapes grown in Texas, yet in unsurprising fashion, the Hill Country determines how wine goes in Texas. Proximity to Austin apparently confers some kind of corona of sacredness. Andy Timmons, the founder of Texas Wine Company, and the man Kim McPherson calls the “most innovative winemaker in the state,” acknowledges with no trace of disdain that Fredericksburg shapes Texas wine just as California shapes American wine.

Timmons’ vineyards produce 19 varietals, and he calls Picpoul Blanc, Roussanne, and Viognier the “rock stars.” In fact, Texas Monthly called his Lost Draw Cellars Counoise Rosé the best rosé in Texas this year. Because he’s a businessman as well as a farmer—all great wines begin with great farmers and vineyard managers—he’s opened a tasting room in Fredericksburg. Newsom has one, too, just outside Fredericksburg along Highway 290.

Truthfully, Hill Country AVA wines have come a long way. While many of the wines you drink in the lavish tasting rooms along 290 are from Lubbock grapes, the percentage is shifting. Lubbock winemakers have helped, of course. William Chris Vineyards, one of the best choices in the Hill Country, has a partnership with Andy Timmons; his nephew is the winemaker. Lubbock will continue to shape Texas wines, much as Napa shaped California wines, but here’s the hard part: Napa is close to San Francisco, and Lubbock is close to Amarillo.

However, going to Lubbock for the wine means you get to experience an awesome small city that is geographically separate enough that it’s developed its own cool culture with excellent restaurants, world-class wines, great beer, barbecue, music, and art. As for Fredericksburg, the drive is nearly the same as the drive to Lubbock, and staying in Fredericksburg means avoiding all the traffic snarl and overcrowding that is today’s Austin.

For a party atmosphere near downtown, the Cotton Court Hotel. For comfort and chef-driven food in the on-site restaurant Claraboya, the DoubleTree is conveniently located on Avenue Q two minutes from downtown. The Pioneer Pocket is a dedicated floor in a residential building downtown, so if you’re looking for quiet and aren’t too concerned about amenities, this is an excellent choice.

For morning coffee, Monomyth is close to campus and family owned and operated. Excellent, quiet place to get some work done.

Lubbock has a wide variety of cuisine, from West African at Vizo’s to upscale casual Mexican at Cocina de la Sirena to old-school burgers at Christakis. Dirk’s is excellent for lunch or brunch. West Table, located in the same building as the Pioneer Pocket, is one of two absurdly good chef-owned and operated concepts in Lubbock’s food evolution. The other is The Nicolete, about which Texas Monthly raved that the dishes are “versions of heaven.” Chef Finn Walter’s place, team and food (get the elk tartare!) are stellar

The Hangar Hotel is a repurposed airplane hangar, and if that’s not enough to sell it, you’ve forgotten your childhood. It’s also adults-only, if that helps. The Inn on Barons Creek is a popular choice: comfortable, well-appointed, and just off downtown. If privacy and seclusion are your thing, The Trueheart Hotel offers separate townhouse-style “cabins.”

Head to the Old German Bakery & Restaurant for breakfast/coffee. Hit up Hondo’s on Main for lunch, and get the pastrami! For dinner, it’s Otto’s, and you’ll need to take someone with you, because you need both the duck schnitzel and the wurst platte.

William Chris is a standout on 290, but so is Lost Draw Cellars in Fredericksburg. Southold Farm + Cellar has a beautiful on-site restaurant, and their wines are now in Oklahoma.