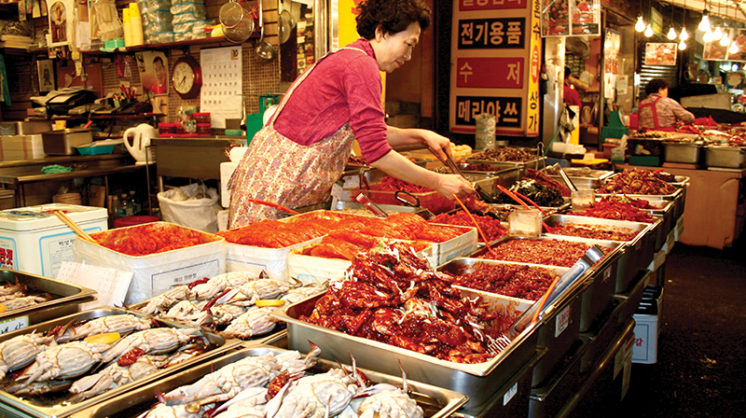 No matter where my over-stimulated eyes wander across Seoul’s Gwangjang Market – whether to the amorous Korean couple feasting on mung bean and shrimp pancakes, or to the cook, a short, terse woman, as she hovers over a pan of tiny whole fish snapping in boiling oil – I return to what sits in front of me: a pig snout.

The Gwangjang Market is Seoul’s oldest and largest market, not to mention the busiest. Built in 1904, the market hosts 35,000 people daily with more than five hundred shops and eateries. Larger than eight football fields, the market is constantly chaotic, but no place more so than the food court.

And while there are many culinary conquests in this market, something about pig nose makes me shudder. I try to focus on my first dish: soft rice, mashed up into balls and covered in chili sauce almost hot enough to serve as a distraction.

Moments later, the terse woman sets in front of me a firm but chewy rice cake covered in hot chili sauce and a Mayak Gimbap – which is loosely translated to mean “addictive” or “drug.” It is warm rice, carrots, radish and crabmeat wrapped in seaweed. While this sounds similar to a standard roll found at any corner sushi joint in any city, when prepared fresh at this bustling nighttime market, this roll is anything but ordinary.

I bite through the brittle seaweed into the rice, soft and warm, and then into the crunch of the carrot before finally getting to the fresh crabmeat. The flavors dance with the chili paste from the rice cake I had just finished, and as they continue to blend, I barely even notice the pig snout seeming to eye me through its nostrils.

Small trucks and scooters share the narrow indoor thoroughfare, with pedestrians browsing the cases of each of the local vendors. Someone mentions “sundae.” And while a sundae sounds delicious, I’ve been in Korea long enough to know that they are not talking about ice cream and fudge. 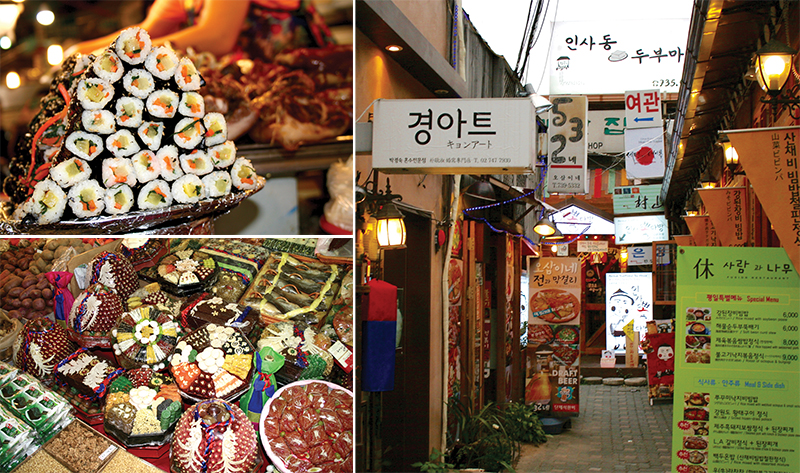 Sundae is steamed pig intestine stuffed with glass noodles, the market favorite. Though daunting in its appearance and earthy in fragrance, the meat is chewy and its strong flavor yields to the soft noodles (sometimes rice) and a spicy, chili-based tteokbokki sauce. It is often served with pig liver and/or heart. While it could be a meal in itself, I take only a few bites and press on.

There are stands everywhere, each with its own specialty. There is yukhoe, a beef tartare mixed with pear slices and egg yolk, and there is kalmandu, a brothy hot noodle soup with dumplings cooked in anchovy stock. Maeuntang is a spicy fish stew boiled with an ambiguous recipe, but usually made up of assorted veggies and fish cooked with spices hot enough to make you sweat.

There are the surprisingly tender chicken feet, of course covered in hot sauce, and everywhere you go there is Makgeolli rice wine, served chilled and usually in tin cups. Traditionally this milky elixir, similar in taste to sake, is taken in shots, and as my experience has proven, it can disappear very quickly.

At a small perimeter restaurant, a waitress first arrives with the most popular item in the entire market. Bindaetteok is made from mung beans (similar to garbanzo beans) that are mashed, mixed with various combinations of vegetables, pork or seafood and then fried. The texture is more hash brown than pancake, but either way, they are delicious and the variations are endless. Next is a plate full of jeon, similar to Japanese tempura. Shrimp, crab, carrots, mushrooms, onions and meatballs are dipped into a sweet flour-based batter and fried.

By meal’s end, I am exhausted. I eventually notice that the pig snout from my first booth is missing – someone has clearly taken it home for dinner. I am thankful that no part of the pig was wasted … and more grateful still that it wasn’t me who had to eat it. Something about a snout I just couldn’t stomach, even if it is just pork. 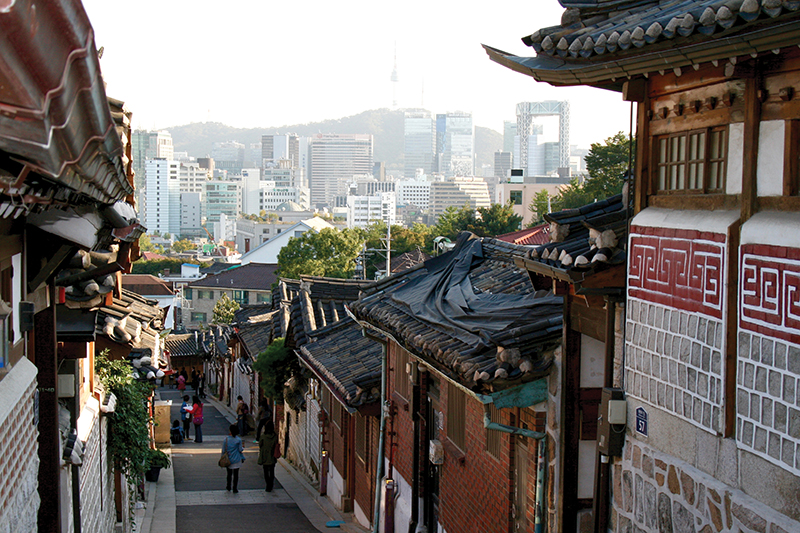 Bukchon Hanok Village The otherwise frenetic city of Seoul seems to wrap its arms around this preserved picturesque village located on the city’s north side. The Bukchon walk is a hilly one and offers incomparable views of the city, as well as a glimpse into Seoul before it became the ultramodern metropolis it is today.

Hanok refers to the traditional Korean-style architecture. While many of the Hanok homes here still serve as residences, others are now art galleries, studios, cafes, boutiques and teahouses. Traditional painting classes and knot-tying classes are also offered throughout the village. Visitors could spend an hour or a day getting lost in Bukchon’s narrow alleys and meandering stone streets.

Nanta Theater has become an explosive part of contemporary Korean culture, and Nanta is king. While originating in Seoul, Nanta has been performed and is acclaimed all over the world. The pot-and-pan banging, veggie-chopping percussive performance is most aptly described as “Iron Chef” meets Stomp. With no shortage of laughter and a high likelihood of getting a little messy, Nanta is an unrivaled, interactive live food and music extravaganza.

Changdeokgung Palace Located in the heart of Seoul and a short walk from Bukchon Hanok Village, Changdeokgung Palace, a UNESCO Heritage Site, dates back to 1405. Strategically situated at the base of a mountain on a river’s edge, Changdeokgung is as majestic as it is imposing. Although currently uninhabited, it was home to many of Korea’s kings and ultimately became the nation’s primary palace. Its beautiful pagodas and ponds are set in perfect balance with the garden’s natural surroundings, and can be viewed only with a guide for an extra fee.

Insa-Dong With more than 100 galleries and a good smattering of tea shops, cafes and restaurants, Insa-Dong offers an assortment of tea sets, beautiful tapestries, antiques, Buddhist art and even “Gangnam Style” socks featuring none other than Psy. Although more metropolitan in feel than Bukchon, the main arteries of Insa-Dong sufficiently give visitors a sense of product and place. But it is in the alleys where the locals gather and Insa-Dong really comes to life.