Serve Your Enthusiasm at Gusto 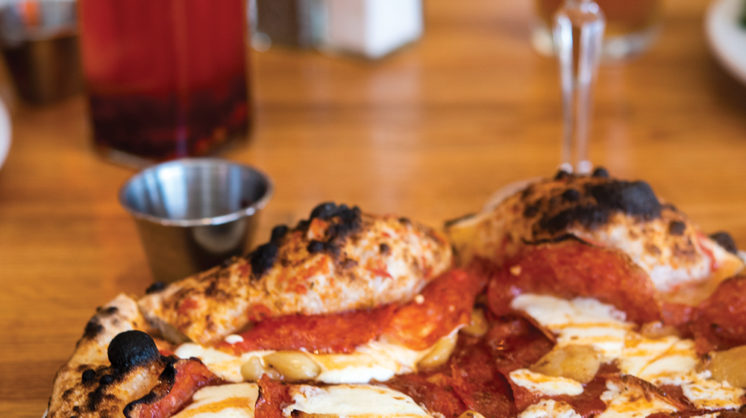 Pizza is not exactly a new concept – flatbread with stuff on it has been on Mediterranean menus for millennia, and once the Italians got over their fear of tomatoes (look it up) in the late 1600s, the dish as we think of it really took off – but it never gets old, either. Likewise, Pizzeria Gusto isn’t a new restaurant; it’s been bringing crowds Uptown since late 2014. But while it’s dedicated to sharing one of the most venerable styles of pizza with diners, its menu is sufficiently varied, and it has such a commitment to experimentation, that guests can get a fresh experience with practically every visit.

In Italian, gusto can be either “flavor” or “preference.” In English, it’s “zest” or “energetic enjoyment.” In OKC, it’s at 2415 N Walker, and it’s definitely worth making multiple trips. You can even experience different atmospheres depending on seating – the long bar-height tables seat 14 in a more family-style milieu, versus booths and banquettes to the north and a cozy carpeted enclave of four-tops to the south. Plus, it might not be your first choice in August, but as the year progresses, the patio is always a temptation.

OF PIES AND PRIDE
Gusto’s pizza approach is decidedly, deliberately old-school: They aren’t just inspired by the venerable Neapolitan style, they import ingredients from Italy and had their oven hand-built by master artisan Stefano Ferrara in Naples. That’s key for creating their Platonic form of pie – a soft, chewy crust with an airy outer ring and little bubbles of char around the perimeter. I would say the form has pros and cons, personally. On one hand, the individual pieces have a tendency to droop (you might need a fork to hold up the tip for your initial approach), and it doesn’t travel particularly well … the magic is in the moment. On the other, the super-hot oven means the turnaround time is spectacularly fast. It only takes about 90 seconds to cook a pizza, so they’re never far away. Plus, when it hits the table and you take that first bite, there’s nothing else like it. There really is magic in the moment.

And the menu’s range makes trying multiple types a must. If you just want cheese, they can do that (though it might have a little fried sage and truffle oil), but options abound, from cherry tomatoes with kalamata olives to roasted chicken and apples to butternut squash. And that’s just the printed menu – each week sees a new special from chef Kathryn Mathis’ kitchen, so locals who follow @gusto_pizzeria on Twitter can pop in to sample shrimp with red pepper sauce, or short rib and cilantro.

The Gusto Pepperoni is an especially delicious case of democracy in action. The restaurant’s concept is authentic Neapolitan pizza, after all, so the menu contained none of that staple of American pies in any form, but eventually the kitchen whipped up a little something (pepperoni, roasted garlic and a honey-sriracha sauce) as one of the aforementioned weekly specials. Response from visitors was so emphatically enthusiastic that it earned a slot on the menu posthaste. Sometimes relaxing the rigors of tradition can be worth it … but they draw the line at providing sides of ranch dressing. 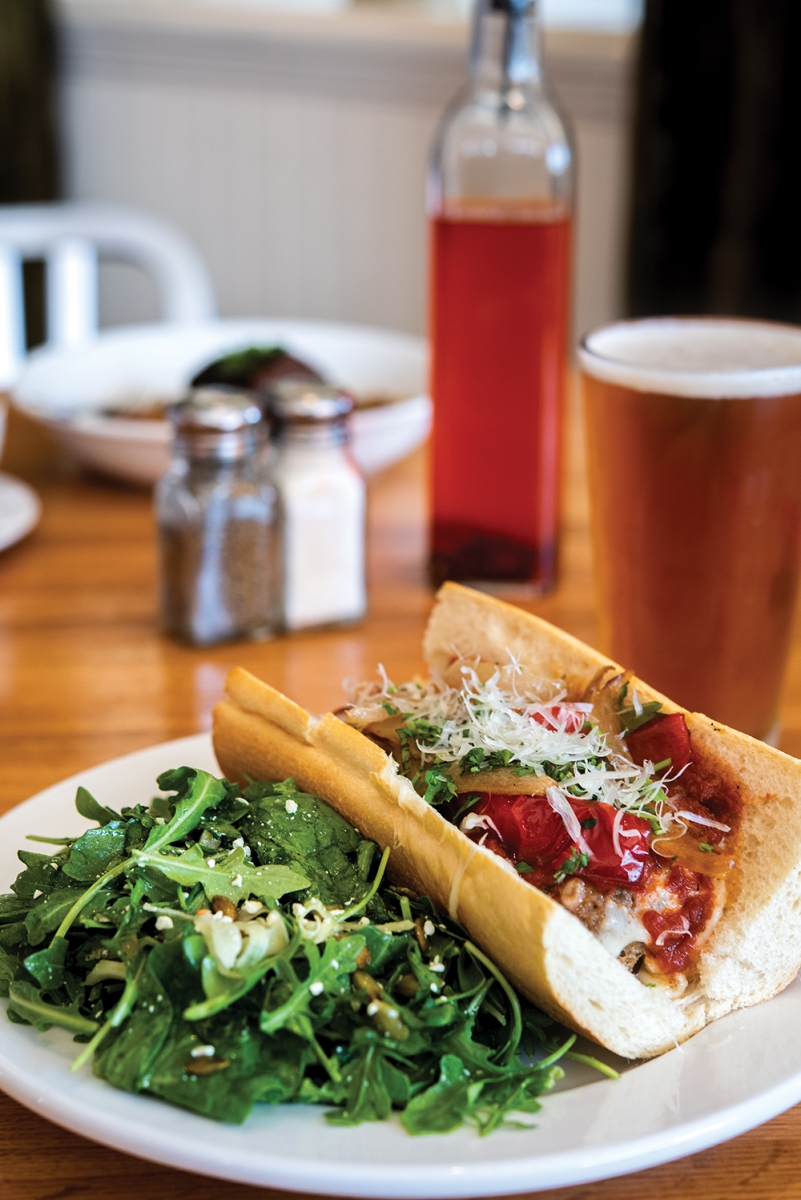 … AND MORE TO TRY
Despite it being the namesake dish, I’m also surprised and impressed that someone could easily visit Gusto regularly and be perfectly happy never ordering a pizza. The salad selection offers far more than merely garden or Caesar, the meatball sandwich is a highlight if you’re a fan of fennel and the tender potato gnocchi swimming in a tangy pool of agrodolce almost make their accompanying portion of braised beef an afterthought. Almost. Gusto even makes delicious Brussels sprouts, which is something I think I’ve only ever said once before, and my mom might still be in shock from hearing that. If on a return visit I try and enjoy the artichoke hearts, she might never recover.

DOWN THE HATCH
Between meals? No problem – just get some hummus or a plate of olives for accompaniment and settle in to experience the excellent bar. Local beers have a good showing among the tap handles, and Schuyler Crabtree’s craft cocktail game is strong. If you hurry, the specials might still include the gently aromatic combination of blueberry gin, honey lavender syrup, egg white and Bolivar bitters called In the Poppies. Even if the list has rotated, it – like the menu – is always ripe with possibilities, and you’re bound to find something worth savoring. With gusto. 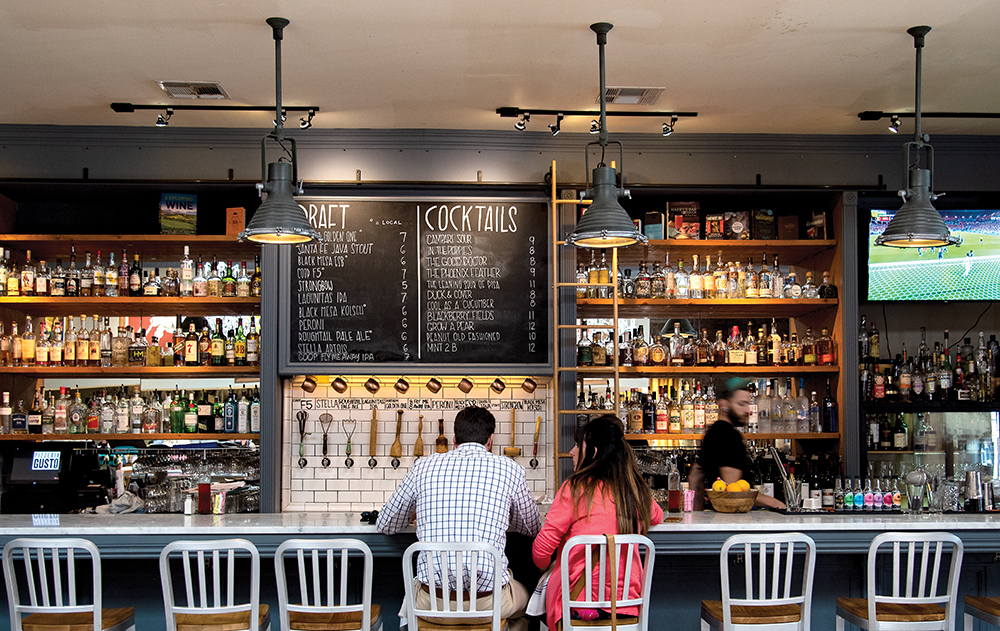 WORKING FOR THE WEEKEND
If you needed any further convincing that this is a little more than merely a pizzeria (although a dazzling one), swing by on Sunday morning for brunch. The polenta with nduja sausage – like an Italian andouille – topped with onions, peppers and fried eggs is worth the trip by itself.