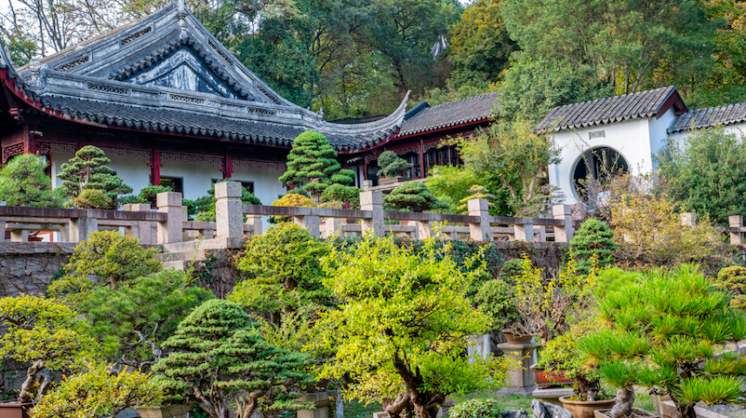 A visit to Suzhou in China is not complete without a tour of the Suzhou Number One Silk Mill. There, you will watch tiny worms feast on mulberry leaves and larger worms spinning their delicate silk cocoons and somehow weaves magic.

The city of Suzhou itself, situated in China’s Jiangsu province – a 22-minute bullet train ride from Shanghai – is a lot like silk: a smooth and seamless interweaving of striking canals with a light and meditative spirit. It is a place where man has channeled the waters of the Yangtze Delta to create colorful threads of connectivity that blend together in a tapestry robust with culture and cuisine. At its best, like silk, Suzhou’s venerable water towns ensconced in a shimmering megalopolis shine back our own light as we move through them, coloring and shaping our perception of the world in new, dynamic ways while concurrently awakening something ancient within us.

At the silk mill, employees harvest the cocoons and spin out the silk into impossibly thin thread, which is then fashioned into everything from bedding to art decor; scarves to traditional dresses. These kinds of wares and beyond are all available to buy or simply to marvel at as you exit the museum – through, of course, the gift shop. Silk is fascinating well beyond its construction. In addition to its cool, soothing texture, the fiber’s prism-like structure makes it refractive, giving silk garments the ability to change color depending on how they engage with light. Western civilization’s insatiable desire for this unique fabric is what blazed the trail for the famed “Silk Road,” which came into being during the beginning of the Han Dynasty in 130 B.C. and first connected China to the Roman Empire.

My visit to this region, like most, begins at Suzhou’s most famous child: The Humble Administrator’s Garden, which dates back to 1509.

Perhaps Suzhou’s most thriving tourist destination, the crowds in front of this UNESCO World Heritage Site are a bit daunting … but it is well worth the wait. The garden’s stunning bridges, pavilions and koi ponds have been a work in progress since the time of the Song Dynasty, and it’s considered by many to be the most beautiful garden in all of China.

Because of its network of canals, Suzhou is often referred to as the “Venice of the East” or the “Venice of China.” It is along these canals that Suzhou’s spirit is most vibrant, so after navigating the masses at The Humble Administrator’s Gardens, I hop into a rickshaw and head to my first waterway. If you really want to see a town and a rickshaw is a possibility – take advantage. As the driver pedals slowly through the city’s narrow streets, I marvel at the markets and small alleyways until we arrive at Pingjiang Road.

Pingjiang Road runs parallel to the lulling green water of my first canal, and it is breathtaking. The street and canal are lined with white-washed homes, shops and tea houses. After browsing various silk and jade shops, I stop into the world-famous Hong Deng Ji Restaurant. Known for its “puffy bread balls” and noodle dishes, what makes this restaurant most unique are the open kitchens where entering visitors watch chefs cook over open woks.

Next we head to Tiger Hill. Tiger Hill, also known as Lion Mountain, is more like a small hill with a lion’s spirit. Horse-drawn carriages wind along the canal at the base of the hill and pathways meander through bonsai gardens (bonsai classes are available) and koi ponds toward the hill’s peak, which offers a brilliant 360-degree view of Suzhou. At the top is the seven-story, 1,000-year-old Yunyan Pagoda. The site, which is designated a National Historical and Cultural Site in Jiangsu, is built partly on soil and partly on stone, giving its top a tilt of almost six feet from its base.

Perhaps most striking of all of the canals and water towns is the ancient hamlet of Tongli. At 51 square miles, with seven inlets connected by 49 ancient stone bridges, to walk through Tongli is to walk in the Song dynasty. Among the 49 bridges are the most notable “Three Bridges” – known as Taiping (meaning “peace,”) Jili (“luck”) and Changqing (“celebration”). One could spend an afternoon exploring Tongli’s narrow shopping streets, tea houses and of course, the Retreat and Reflection Garden for a lengthy stop. This privately owned garden features numerous pavilions, towers and terraces, as well as a koi-rich lake, and is also a UNESCO World Heritage Site.

The last of the canals is best saved for a night visit. Shangtang Street, which originally was originally in 825 A.D., is as thriving and fashionable as it is historic. Song He Lou is perhaps the street’s most famous dining spot, and features a sweet and sour mandarin fish dish in addition to a crab roe tofu that cannot be missed. The Shangtang night show features the Kunqu Opera. Here, performers engage in an ancient and elegant performance that offers insight into Suzhou’s colorful culture.

Last of my stops in Suzhou is Panmen Park. Of all of the stops along the way, it is this spot that I most look forward to exploring – because it backs up to my hotel (Pan Pacific Suzhou) and I can walk out my door and explore it as the sun rises. Panmen Park is China’s oldest gate, dating back 2,500 years, and is made up of two water passages. Alongside is Ruigang Pagoda – Suzhou’s first. While the history appeals to me, watching the city wake up and come to the park is the most appealing factor. On one terrace overlooking the stunning lake, a handful of women do Tai Chi. On top of a small hill, a group of men gather with telephoto lenses in front of a birdfeeder to photograph the local avian population. As I make my way across a small bridge towards a small pavilion, I hear music. Sunlight spills onto the pavilion. A pagoda towers in the background. Then, into the frame of the pavilion, swirl a beautiful couple slow dancing to the sounds of the morning. It is tender moment, and one that sears into my mind. As timeless as the land upon which I stand. As smooth as silk.