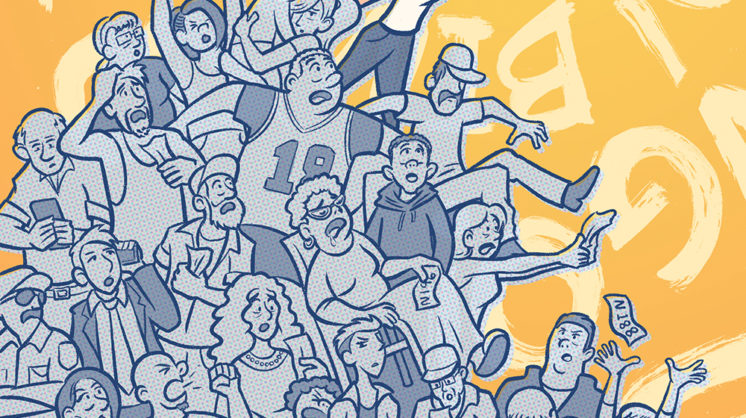 On a lark, the Beau and I tied the knot a month or two ago during a weekend in Santa Fe. The process went so smoothly, it felt more like a dress rehearsal than a legally binding agreement. Much as I dreaded bureaucracy and red tape, everything went off without a hitch. In a matter of an hour, we were newlyweds.

As we walked away from the courthouse, my mind was racing: I’d just signed on for a new name! I needed to get on Facebook to make it official. Ohhhh, if only it were that easy. To make things governmentally official, I’d have to start at square one – Social Security, the root canal of American existence.

Upon my return to work, I mentioned to a co-worker that I’d be going to the Social Security office one morning to present my ID and assorted documents. “Make sure your phone is fully charged,” he replied. “I went with my wife to change her name, and we were there for four hours.”

“I’ll go on a Tuesday while it’s raining. Maybe they won’t be busy then,” I said, still glowing from the effortless success of my Santa Fe nuptials.

With my phone fully charged, I set off for the Social Security office at Shepherd Mall. Google Maps had even suggested nearby parking, but once inside, I saw nothing that suggested the office had ever even been there. I did, however, work in my 10,000 steps as a mall walker while searching.

Nothing on the pickled-in-1990 Social Security website said, “Hey, fool – we moved.” I learned about the move by scrolling through the customer comments section on a third-party website – something I’d never do on a normal day. My eyes had only rolled back into my head three or four times before I saw the embittered customer comment that cracked the code. “You mother*#%@^$ need to update your &%&*# site! It’s on north Kelley now.” Thank you, and good day. Off I went, thinking, “This will be nice.”

I entered the relatively new building and quickly recognized the telltale signs that I was in the right place: security X-ray, armed guards, overabundance of cranky toddlers.

Once I cleared security, I would only have to answer a few preliminary questions on a touchscreen monitor before getting a ticket. A 20-inch monitor, located about 30 yards across the room, displayed the ticket numbers of the customers being served. The monitor indicated that customer N92 was on deck. I looked at my ticket: N185.

I selected a lightly cracked pleather chair, as far away from the open-mouth cougher as possible. Dimly lit and painted nicotine-stain yellow, the fairly new waiting room already had all the charm of an aging government office. It could just have easily been the set from a Tracy Ullman sketch. It was a sea of humanity, the huddled (unwashed) masses, the mother lode of people watching/people smelling.

In many ways, the waiting room was like a bingo hall. Customers sat, clutching their tickets, while an announcer called sets of letters and numbers. After waiting for hours and hearing every number ahead of them called in order, customers would still act surprised to hear their number. Staggering about in groggy disbelief, they’d ask bystanders, “Did he just say R112? What window did he say? I don’t know which window! Did he call R112?”

Hours – and I do mean hours – later, the announcer called N185. I couldn’t believe it! I stood up and looked around a sea of noisy walkers, house shoes and the germ-masked faces of my fellow captives. “What? Did he just say ‘N185’?” I asked.

“That’s what he said,” someone coughed back.