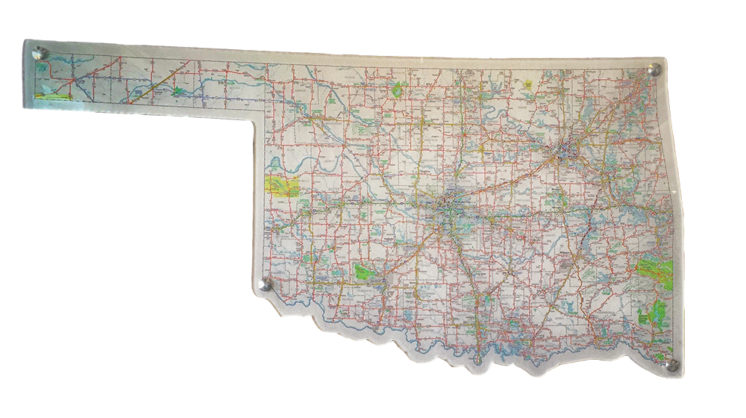 Oklahoma’s borders enclose nearly 70,000 square miles of territory – that’s pretty big, right? Well, yes and no – it’s not small, but it turns out that it’s easy to get ahead of yourself when making big assertions.

THE CLAIM: “In fact, Oklahoma is the 18th largest state, larger than any state east of the Mississippi River and larger than all of New England.”

Written reference to Oklahoma as being larger than any state east of the Mississippi dates back to early statehood, noted in Volume 2 of The Oklahoma Red Book, issued in 1912 by the Oklahoma Territory Legislative Assembly Council, compiled by W.B. Richards, Corporation Record Clerk, under the supervision of Benjamin F. Harrison, Secretary of State.

The assertion has been repeated as fact in several books. In addition to the aforementioned Oklahoma Politics and Policies, later references include OKLAHOMA: A History by H.

Wayne Morgan and Anne Hodges Morgan, and It Happened in Oklahoma by Robert L. Dorman.

And it is true … but only if you fudge the numbers by counting only land, subtracting all areas within state borders occupied by a body of water. This approach is self-serving as Oklahoma – despite its claim to having more shoreline than any other state, which has also been refuted – tallies only 1,303 square miles of water, or 1.87 percent of its total area. That’s far less than the national average.

But in the claim for size supremacy, the U.S. Census Bureau has the final say.

East of the Mississippi River, the largest state in total area is Michigan. The 11th largest state in the union, the Great Lakes State encompasses 96,714 square miles, a little less than Wyoming and a little more than Minnesota. Michigan boasts 40,174 square miles of water within its borders, amounting to 41.54 percent of its area.

With water included, as the Census Bureau prescribes, Oklahoma’s claim to being larger than all of New England is also refuted; the region’s six states combine for a total of 71,992 square miles to our 69,899. Oklahoma just isn’t quite wet enough to get over the top.